MY FICTION: How I Wonder What You Are 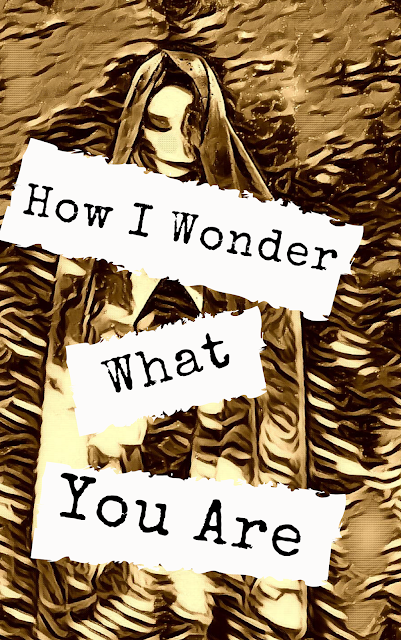 How I Wonder What You Are
By
Al Bruno III

I’ll know the time is right when the howling begins. It will be after sundown of course, the Mothers and Fathers of Jebsen only scream after sundown, and only on the clearest of nights.

There is no town of Jebsen listed on any map, even in its heyday of the 1940’s it was too small to be worthy of notice. It’s nothing more than a collection of buildings at the end of a dead end road. On one side it is bordered by long untended corn fields, on the other the swampy remains of Lake Campbell. The most noticeable of the town’s buildings is a red brick edifice with a wide domed roof of fractured glass. The rest is just barns and single story homes. Along the border of the swamp is row after row of barbed wire and bear traps.

I’ll let them scream for an hour or so, let them become tired. Even now it amazes me how I had learned to pick out the individual voices in the cacophony. The Widow Toth tires easily but the Garrets will be at it until dawn.

And what will I be doing while every able-bodied adult is on the rooftops? I’ll be slipping these pages into this mason jar and sealing it lid in place with the wax from a melted crayon. The Children of Jebsen won’t miss just one, especially not purple.

Twenty-five years ago a calamity befell the town of Jebsen. The authorities blamed it all on the after effects of an experimental insecticide but the Old Book the town elders read from every Sunday said otherwise. It told the citizens of Jebsen that a curse was carried by those twinkling dots in the sky. A malevolence traveling at 186,000 miles per second that would twist their Children into nightmares should a glint of it ever touch their skin.

That is why they scream at the starlight; hating it, cursing it, raging at it.

You can’t see what their Children have become and not feel the same way. The changes are heartbreaking and horrifying all at once but after you spend time with them you feel differently. There is mockery in the mis-set eyes that peer from those mollified skulls.

They know secrets. On quiet, cloudy nights I would put my ear to one families’ basement door or another and hear them murmuring and giggling as they writhe in their basement styes.

I think of their weeping mouths and soft teeth and remember that day half a decade ago the ill-advised shortcut and along the neglected county route 99. I remember approaching the train bridge and seriously considering turning around, it looked decades out of repair and I half suspected it would collapse as I passed under it.

But I didn’t turn back, my ego wouldn’t let me. I was right and the road was wrong so I drove under the train bridge, momentarily marveling at the strange and elaborate graffiti that covered it.

I was just past the structure when a small, bent figure ran out from the long grass.

The sounds are what I really remember; the squeal of the brakes, the thud of the body on the hood of my car, the thick crack of laminated glass.

I would later learn the name of the child I had hit was Julius McCarty but all I knew then was that there was an emaciated, bloodied shape lying halfway through my windshield.

Human instinct made me reach out, to see if the little boy was alive. When my fingers brushed his skin he twisted around to face me. His mouth lashed out proboscis-like and nuzzled into the flesh of my arm.

Pain bristled out from where the boy had latched on to me. I screamed, thrashed. I shoved the car door open and tumbled out onto the asphalt. The boy coughed once and died.

At first the wound held all my attention. How could it not? I had expected to see torn flesh and blood but instead the boy’s distended mouth had left behind a cluster of thick, festering ulcerations.

But then I became aware of the men making their way out of the tall grass. These were the Fathers of Jebsen understood immediately what had happened.

They had brought everything they might need to bring one of their Children back home to its basement; rope, bandages and cudgels. It was also everything they needed to make a captive of me.

They, dragged me away from the accident site, through the tall grass and over the collapsed remains of a chain link fence to leave me in the care of the Mothers of Jebsen. Those gaunt women had cudgels of their own and I was a mass of bruises and welts by the time the hole in the Earth had been made to their standards.

The menfolk returned carrying the child wrapped in a linen shroud. They dropped it roughly into the ground. There were no ceremonies, tears or headstone. It was well after dark by the time I had filled the grave back in.

Now here it is years later and I’ve had to dig a dozen more graves, one by one the Mothers and Fathers are dying out, it’s always a surprise when it happens. Every mother and father of Jensen is withered and white haired but every year a few more die in their sleep, or at work in the fields or at prayer in their red brick observatory.

The Children are dying too, not a one has ever lived past seventeen. One by one they waste away, except of course for the occasional accident like the one that trapped me here.

Despite these curse that has befallen them the people of Jebsen continue to reproduce, each mother convinced that this time she will give birth to the Great Redeemer as was foretold in the Old Book. Each time they fail and each time the result is locked away in it’s family’s basement.

You can’t imagine those basements, the smell of rotten meat, the ankle deep fecal matter and the perfectly clean toys. They draw equations on the walls, gold and silver crayons are their preferred color. Every Tuesday I have to visit each of those cellars and scrub the theorems and postulations away.

The youngest of the Children is a newborn, still angry from the womb, the oldest is seventeen and nearly rotted away. No matter the age they all taunt me as I work, sometimes with bites, sometimes with maledictions. Both have left unimaginable scars.

So many scars now, I’m marked, I could never walk among the people I’d known before. They’d refuse to recognize me and insist I was a stranger

The Widow Thoth says this is my penance for the death of Julius McCarty, she even went so far as to cite chapter and verse on the subject from Old Book itself. The Mothers and Fathers of Jebsen, base every aspect of their lives on that thick volume of prophecies and homilies.

I wonder if anyone will notice me as  leaving. I doubt it, even when they’re not screaming their heads off a long dead suns they barely notice my comings and goings.

As I said before, the Mothers and Father’s of Jebsen have become so sure of me. Some families think I’ve become a true believer, the rest think the cinder block chained to my ankle is enough to keep me in my place.

I don’t know who you are or when you’ll find this message. My only hope is that you will believe me. If you do, please bring this document to the proper authorities. Don’t let my death be for nothing.

I go to the bottom of the swamp with two regrets. One is that I won’t be there when the town of Jebsen is discovered and burned to the ground.

The other is that six months ago I accepted Father Garett’s invitation to join in their celebrations. I went willingly with them to the old brick observatory. I prayed with them. I danced with them. I partook in all of their debasements.

And for a little while, perhaps an hour, I was happy.

They even asked me to give reading from the Old Book. I eagerly stopped up to the podium and began flipping through the thick volume.

Everyone waited for me to choose a passage and speak but all I did was shake and weep at what I beheld. My knees buckled. My mind shut down. I had to be carried out and put to bed.

You see, the Old Book was blank from cover to cover. You’re even holding some of those pages in your hands now.

I used them to write my story.