PLAID STALLIONS has more Steve Austin ripoffs than you can shake a bionic limb at!

Email ThisBlogThis!Share to TwitterShare to FacebookShare to Pinterest
Labels: PLAID STALLIONS has more Steven Austin ripoffs than you can shake a bionic limb at!

Why aren't there Surgeon General warnings on cabins in the woods? Watch the trailer for THE EVIL WITHIN and wonder.

GIRLS WITH SLINGSHOTS is getting all mushy again...

From GIRLS WITH SLINGSHOTS

Silent Strutter, a Ghast and a Squealing White Thing Oh My!

Email ThisBlogThis!Share to TwitterShare to FacebookShare to Pinterest
Labels: awesome art, something Lovecraftian, something strange

A link to the project's Kickstarter

I hate it when this happens...

It's girls in Daisy Dukes vs Zombies in the trailer for DUG UP!

LIGHTS OUT a short film by rom David F. Sandberg

Please allow the following video to illustrate the fact that Christopher Walken is a goddamn national treasure.

And of course how could we forget...

Email ThisBlogThis!Share to TwitterShare to FacebookShare to Pinterest
Labels: Christopher Walken is my weapon of choice, EVERYBODY DANCE NOW, lovable links

The Dark Knight of Carcosa or just THE WORLD'S GREATEST TRUE DETECTIVE ?

Email ThisBlogThis!Share to TwitterShare to FacebookShare to Pinterest
Labels: have you found the yellow sign, something funny, superheroes

Doctor Who 50th Anniversary Project from Chang Dai on Vimeo. 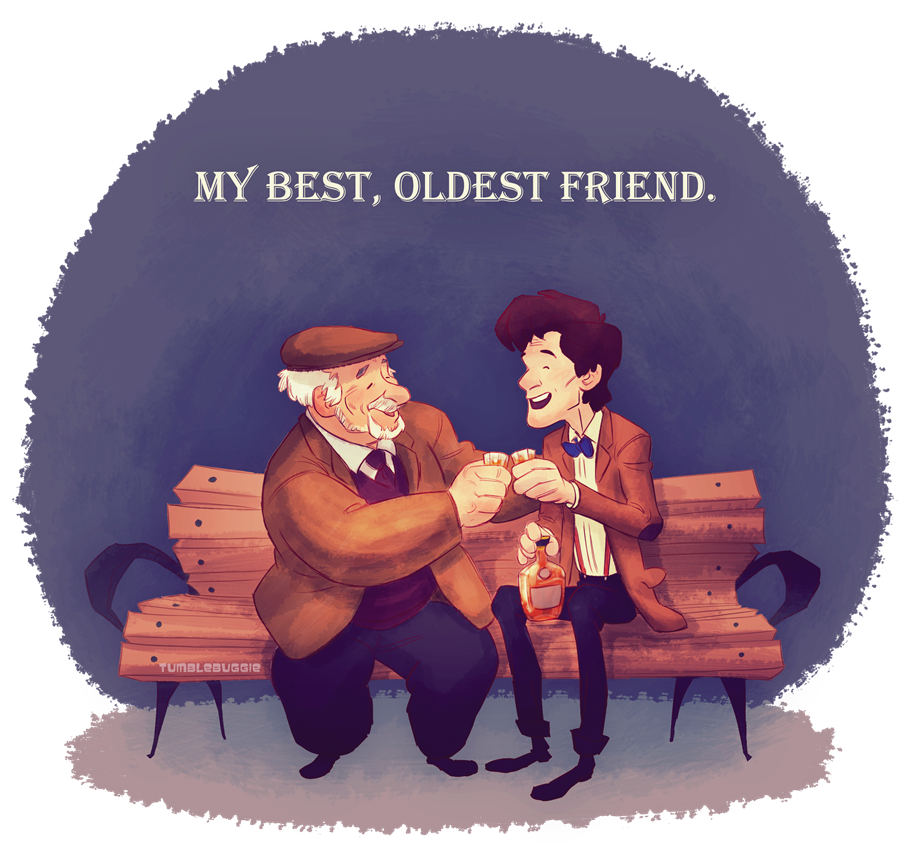 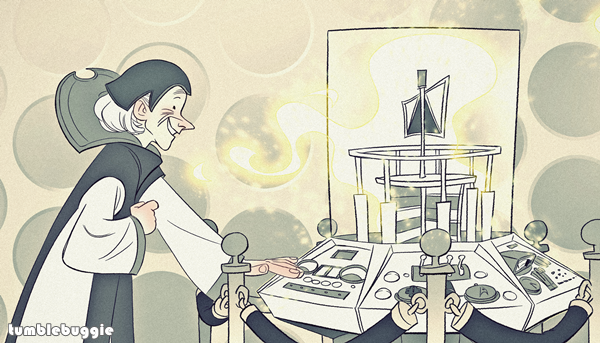 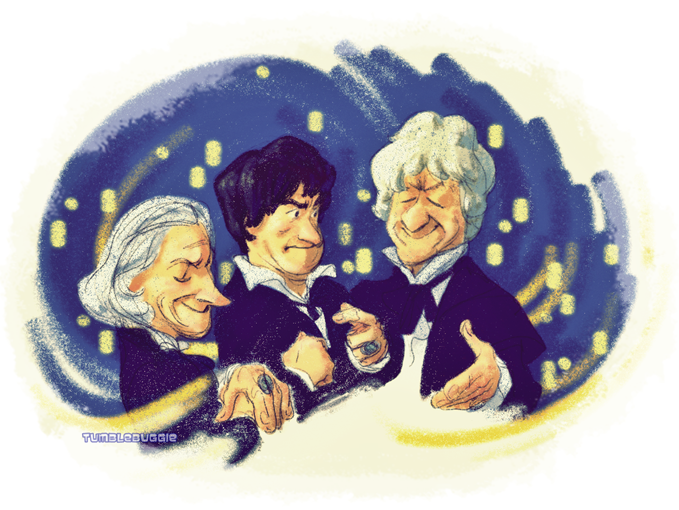 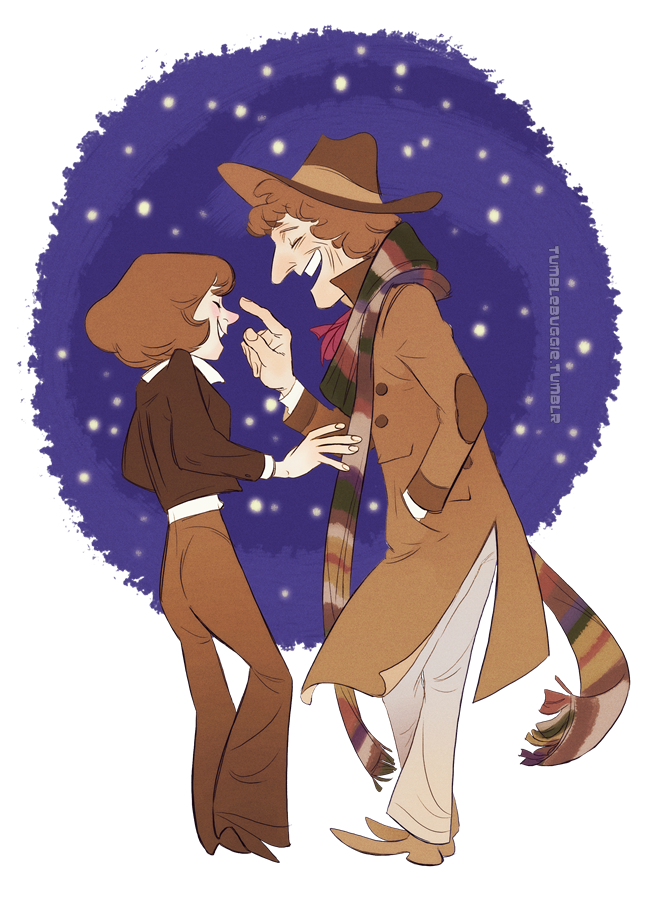 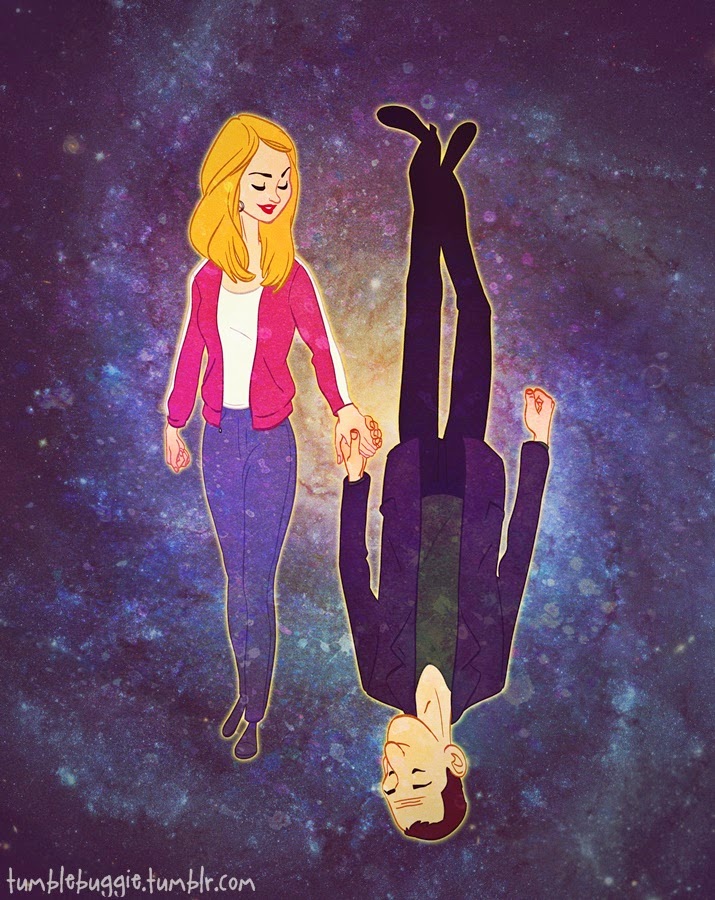 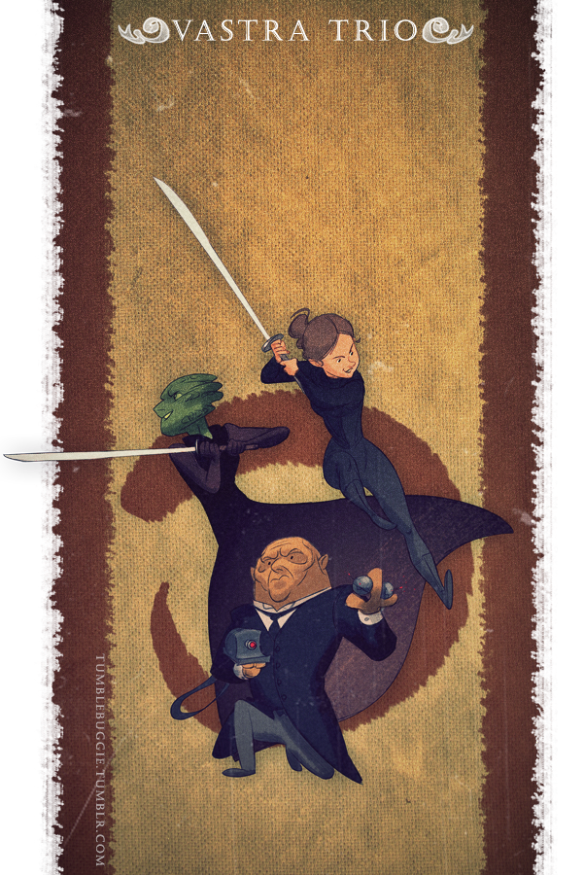 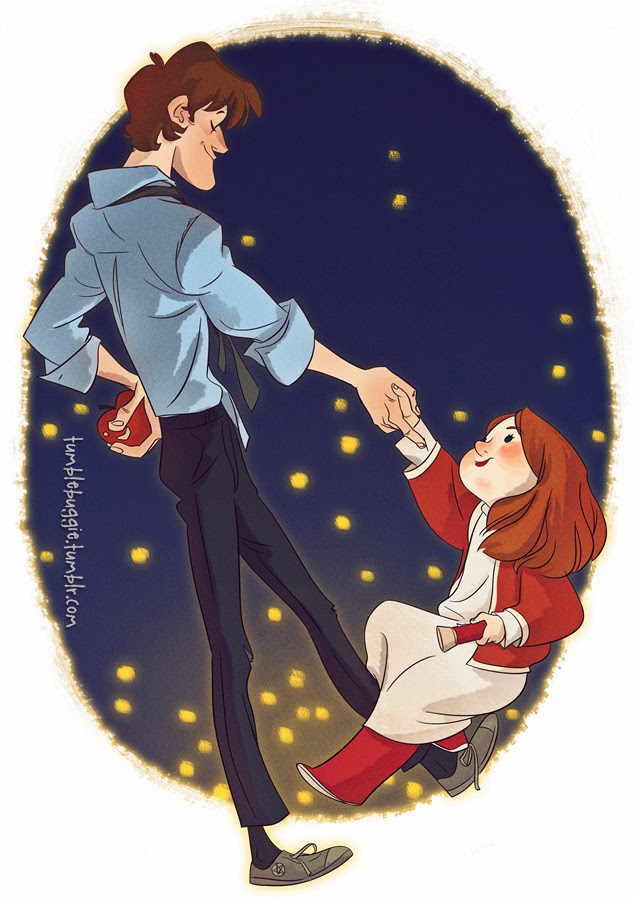 The trailer for TIN CAN MAN is filmed in super freakout vision! 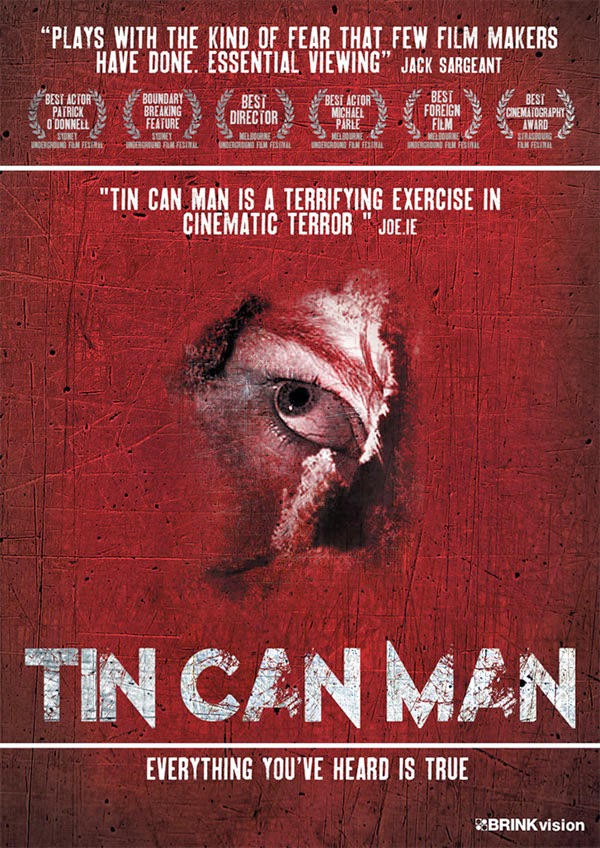 And then the AT-AT mysteriously fell apart...

Email ThisBlogThis!Share to TwitterShare to FacebookShare to Pinterest
Labels: Doctor Who, something nerdy, the greatest show in the galaxy

SUMMER OF BLOOD asks which is worse- the curse of vampirism or a mid-life crisis?

The Cold Inside Chapter Tenth Interlude

The Cold Inside
Tenth Interlude
By AL BRUNO III

“Gotta finish my homework.” Yusuf said. There was a time when he used to read at the dinner table but his mother soon put and end to that. Haideh told him time and time again that supper with the family was important, a chance to talk and tell each other how the day went.

“Are you keeping up? Do you need me to talk to one of your teachers?”

“No. I have everything under control.”

Haideh had suffered through three miscarriages and then nearly died in childbirth bringing Yusuf Ibn Ibrahim Ibn Aswad al-Shadi, her beloved and only son into the world; and she rarely passed up a chance to remind him of it. It puzzled Yusuf because his first memories of her were so wonderful. When he had been a child she had been almost too indulgent a mother, whenever he asked for a toy or to stay up late he usually got his way. It wasn’t until he became a teenager that she started cracking the whip with him, but did she ever make up for lost time.

Her first move was to transfer him out of public school and strand him in Blessed Heart’s not-quite Christian, not-quite non-denominational wasteland. At first she said it was because she felt the school would give him a better education than the one he was getting in the South Colonie School District but Yusuf knew that her real problem was all the girls in their tarted up outfits and tight jeans. “These girls are making my boy have grazing eyes. That is what you have when you look at them Yusuf, grazing eyes.”

So she sent him to Blessed Heart, where all the girls had to wear the same simple uniform. The irony of this was that Yusuf had been harboring a schoolgirl outfit fetish for years.

His father Ibrahim cleared his throat and changed the subject deftly, “We got the new model computers at work.”

“They call them Aptiva’s now.” Ibrahim was a tall man with an imposing glare. Growing up Yusuf had been terrified of him; once when he had been four years old his father had shouted at him and Yusuf had fainted dead away. Time and a change of family fortunes had mellowed his father greatly and now Yusuf was closer to the man than he had ever been before.

He had even taken him out to the movies, the first movie Ibrahim had been to in almost ten years. Of course it was a crying shame the movie had been ‘City Slickers II’, but at least they had been together.

“Aptiva?” Yusuf asked, “What does that mean?”

“Who knows?” His father shrugged, “I just wonder why people waste their money. They should buy Macs. Windows 3.1 is garbage.”

The phone rang, Haideh got up to answer it. When she came back into the room she was scowling, “Yusuf, what kind of friends do you have that call other people’s houses during dinner?”

He squirmed in his seat, “The kind that eat dinner early?”

“He says it’s about an emergency, about school.” She said, “Don’t let your dinner get cold.”

If this is Rich calling because he is bored I will kill him.

Yusuf wiped his mouth on his napkin and excused himself to the parlor, the phone was sitting off its cradle on the coffee table. “Hello?”

“Yusuf?” The voice on the other end was panicky.

“There is something I need to tell you. You are the only one of my friends I could really trust with this.”

Yusuf was about to sit down in the recliner but he caught himself, “What is happening?”

“I can’t explain, you wouldn’t believe me anyway.”

“Where are you calling from? Is this a pay telephone?”

“Why would you call me from there?”

“Because I stole her car.”

“Why- why would you do that?” Yusuf started to shout but then caught himself. He didn’t need his parents discovering that another one of his classmates was going mad.

“Can he hear me?” Yusuf lowered his voice, “Is he making you do this?”

“No.” Greg said, for a moment his voice was lost in a storm of static and then he came back. “…he needs my help to put things right.”

“He needs to go to the police.”

“Like I said, it’s complicated. But I need to tell you something. That way in case I don’t come back…”

“Don’t come back? What does that mean?”

“… tell my parents I love them but I couldn’t just stand by and watch it all happen again.”

“Will they know what you are talking about? Because I don’t.”

“I’m not sure but I want you to try and tell them for me. If I don’t come back tell them about everything Yusuf.”

“You don’t owe Tristam anything.” He was holding the phone so tightly that his fingers were starting to ache, “Maybe you can’t save him, maybe no one can save him.”

“Come over now Greg. Drive over to my house and look me in the eye and say this. Then if there is something that Tristam needs help to do we will do it together.”

“Just tell my parents everything. Don’t let them think I was crazy.”

There was a click and then the dial tone. Yusuf sat down on the recliner, unable to think much less hang the receiver back up. Why would Greg be trying to help Tristam? Hadn’t he heard what the police detectives said? Didn’t he watch the TV news? Tristam was a murderer now. On top of all the bizarre and creepy things that had happened before, he had killed his own mother. This was no mistake, this was no prank. Bloody fingerprints didn’t lie.

What are you thinking Greg? Then again this is the second of your friends to commit murder isn’t it? I can’t imagine what you are feeling now. Yusuf put the receiver back in its cradle. Maybe… maybe he is thinking if we had stopped him in the beginning, instead of encouraging and thinking it was all a joke.

Allah forgive me. Am I somehow partially responsible for all this madness?

“Your dinner is waiting.” Haideh called from the kitchen, “Did I cook all day for nothing?”

“Let the boy talk.” His father said, “We have a microwave. Let him talk to his friend.”

“Friend? Everyone in that school is crazy. I don’t know how they got so crazy.”

Yusuf sat in the recliner reflecting on Greg’s words.

What could it all mean?

My newest video blog review! I watched STAR CRYSTAL so you don't have to!

You will believe that a profoundly gassy child can fly in the trailer for DR. PROCTOR'S FART POWDER

BAD JOHNSON is like Dr Jekyll and Mr Penis!

The teaser for a Nightwing web series...