THE NICK OF TIME (and other abrasions): Where The Streets Have No Name

The Nick of Time
(and other abrasions) 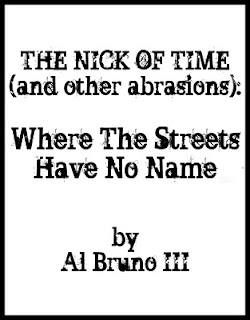 Where The Streets Have No Name


(an excerpt for In The Shadow Of His Nemesis)

She wore a peasant blouse and a loose fitting skirt. Her hair was long and pulled back into a ponytail. There were tiny bells on the silver anklet she wore; they jingled wildly as she ran for her life.

The streets she ran down were empty and unnamed, the buildings and storefronts were vacant. The dust and grime of years covered everything. It caught in her nose and clung to the bottoms of her sandal-clad feet.

Her heart pounded in her chest, her breaths were gasps. She could hear the sound of her pursuers but she wouldn’t dare look back, if she looked back she knew all would be lost.

Benjamin Zachary! she thought. Where the Hell are you?

There was an intersection up ahead- left, right or straight ahead. Where was he? Which way was she supposed to go?

Not that it mattered here in the town of Devsham where every road looped back onto itself again. If I die here… She wondered to herself, If I die in a place that doesn’t exist in maps or memories- will my fravashi find me?

In that moment of fear she almost looked back but stopped herself, wasn’t hearing the mewling buzz of their voices enough? Did she really need to see those dead, segmented eyes a second time?

She cursed herself for agreeing with Benjamin’s plan. Sure split up the party, what could possibly go wrong in an empty town?

Then her sandal caught on the sidewalk and she fell hitting the ground with a gasp and a curse.

A man called to her to her from a nearby alleyway, jumping up and down and waving his arms. He was short with eyes and hair that were equal parts dark and wild. He wore a thick mustache and a small earring.

“Come on!” Benjamin Zachary urged her, he wore faded jeans and a collared shirt with a tweed blazer “Get up! Hurry.”

But he didn’t come to her rescue; he had long ago warned that her life was expendable to the Cause- his was not. Pushing herself to her feet Rio blundered across the street and into his arms.

Her pursuers were getting closer, each of them breaking into a run He dragged her into a nearby building and let her slide to the floor while he erected a barricade. It looked like they were in an office of some sort, Rio watched him stack chairs and wondered what kind of work would have been done here- what the Monarchs would possibly need file cabinets and telephones for?

Rubbing her ankle she gave Benjamin a worried glance, “Where were you?”

“I was fine. You’re the one that keeps getting in trouble.”

“I’m not the one that activated the automated defenses. Luckily I anticipated your mistakes.”

The pounding on the door began; if she closed her eyes she could imagine the legion of tarsal claws striking it. “What do we do now?”

He gave her a wicked grin, “Exploration with a side order of sabotage.”

There was a large cracking sound, the turned back to see a blunt beak working its way through the wood of the door, a keening whistle filled the air as a handful of proboscis slithered out testing the air. Benjamin Zachary stared at it in dull confusion, “That’s new.”

“Oh yes,” He took her by the hand and led her deeper into the building. “Come along now.”

“Where are we going?”

“Do you know where we’re going?”

Several breathless flights of stairs later Rio let herself be dragged into a wide, vault-like room that smelled of chemicals and brine. Pale lights flickered in as they entered, revealing pale pale floors with silver trim. Covered troughs lined the walls.

Benjamin walked over to one of the troughs; it was three feet deep and set into the wall at waist height. A thick layer of frosted glass covered it. A metal clasp held the lid locked in place. He smiled grimly, “Now are these to keep people out or the contents in?”

“Nothing yet. I’m here early,” Benjamin rapped a knuckle on the wall beside them producing a thick, yet hollow sound.

Rio saw that the entire wall was made from a thick glass-like material but all she could see through it was darkness. Were they underground and was this was some window into the Earth?

Once she pressed her face against the glass and cupped her hands over her eyes she saw there was a room on the other side of this glass, it looked huge and bottomless.

Benjamin led her away, “Quite the nursery isn’t it?”

“What are we doing here?”

“Furthering the Cause at best,” he made a show of waving his empty hands in front of her face, a swish of the fingers and suddenly he was holding a handful of gems- white rubies. “Thumbing our noses at the future at worst.”

“You thought we were sightseeing?” Benjamin held the largest of the rubies between his thumb and forefinger and sat cross-legged on the floor, “Now go wait by the door, I have to concentrate.”

Rio bristled, how could he be so dismissive of her? Always treating her like she was stupid during the day and then coming to her bed at night with guilty eyes and quiet promises.

Of course none of those promises were for the future.

There was a muffled bang followed by a chorus of insectile screeches.

Benjamin Zachary looked up from staring into the heart of the gemstone, “That will be Zeth now…”
at January 13, 2012 No comments:

Email ThisBlogThis!Share to TwitterShare to FacebookShare to Pinterest
Labels: The Nick Of Time (and other abrasions)

And now the kitten from HELL...

Email ThisBlogThis!Share to TwitterShare to FacebookShare to Pinterest
Labels: IIIEEEEEEEEEEEEEEEEE

Does your Lovecraftian carpet match the drapes?

THE VAULT OF HORROR wishes NOSFERATU a happy 90th birthday.

From THE VAULT OF HORROR

...How is it that this film still can effect us so profoundly, when so much of horror's power is drawn from the unexpected? One would think that age would be the death knell of a great horror movie, and yet films like Nosferatu prove this to be dead wrong. Whether you're discovering it for the first time all these decades later, or watching it for the 90th time, Nosferatu has the power to utterly creep you out. Personally, I credit it to the merits of German Expressionism...

QUESTION: Is this man making a bold statement about his individuality or is he a living tribute to Dario Argento's OPERA?

...Police Officer Andrew Pirtle said in a report that he saw a man carrying two stuffed animals leaving the store about 10:20 p.m. Moments later the officer was flagged down and informed that the man had just made a mess in the store.

Officer Pirtle stopped the man near Southwest Ninth and Loomis Avenue. As they talked, Pirtle noted the man’s mood switched quickly from passive to aggressive. When Pirtle tried to take Phipps into custody, Phipps allegedly swung around and hit the officer in the face with a stuffed monkey.

The officer managed to control the man’s hands and apply handcuffs.

Phipps was in jail on Monday, charged with fifth-degree theft, disorderly conduct and assault on a police officer. Bond was set at $1,600.

A clerk at the store said that when she asked him what he was doing behind the counter, Phipps replied, “Don’t you worry about it. I’m going back to prison anyway.”...

Click here to read the rest at the DES MONIES REGISTER

Why not visit DR. THEDA'S CRYPT and chat about the sublime vampire film LET THE RIGHT ONE IN?

There's always something interesting going on at the Crypt!

Check out this cool fanvid for the movie he found!