to read the rest of the article click here

And now the bestest, cutest, sweetest cartoon of all time!

And yes I still tear up at the end...

Email ThisBlogThis!Share to TwitterShare to FacebookShare to Pinterest
Labels: something cute, something funny

Because no one should steal your copy of COCK HANDLER

Advertising publication Lürzer’s Archive has made a (somewhat specious) claim that it’s the world’s most stolen magazine. Cut to "Untouchable Covers": an idea from creative Ben Gough of Leo Burnett to prevent the stickiest of fingers from making off with your copy of Lürzer’s Archive by placing quite possibly the most unappealing fake covers over the real thing. We’ve seen similar ideas before--Molson offered guys lady-impressing faux covers like "Trustfund"--but never employed as a prophylactic device.,,,

TALES FROM THE ODDSIDE now has its own heading in the table of contents. 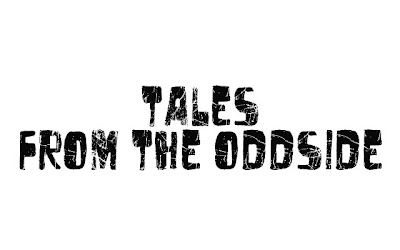 Enter a world of uneasy laughter and ridiculous nightmares

The Girl Can't Help It

Email ThisBlogThis!Share to TwitterShare to FacebookShare to Pinterest
Labels: strange stories, Tales From The Oddside

I am falling beind on these series a bit so in order to give myself breathing space I am putting PRICE BREAKS AND HEARTACHES on hold and am putting my #FridayFlash on repeats for the next four weeks (starting with this one.)

If all goes well my life story will be back up and running by then and my next Friday Flash story NOSLEEP will be ready for you to enjoy.

Email ThisBlogThis!Share to TwitterShare to FacebookShare to Pinterest
Labels: woah

In Marnie’s Arms (An excerpt from the Mask Collector)

(An excerpt from the Mask Collector)

Darren lay in the darkness listening to Marnie’s gentle snoring and cursing himself.

What have I done?

On Wednesday he’d found the nerve to chat up that pretty nursing student he’d been drooling over for months. She told him her name was Leiko. All it had taken Darren to win Leiko’s phone number and a date for Friday night was a few sly smiles and an expensive latte. Darren had spent the next two days preparing. He’d bought a new shirt, new cologne and fresh condoms. He spent hours mentally rehearsing and preparing for the conversations they might have.

When Friday came and he met her at the restaurant he never got a chance to make use of any of his prepared seductions. All she did was talk about herself for two hours only pausing in the conversation long enough to order and hardly eat the most expensive thing on the menu. She even took a pair of cell phone calls during the date and made plans for the rest of her evening.

Needless to say, after the date was over Darren got good and drunk and stayed that way. By Saturday afternoon he was feeling woozy, sick to his stomach and miserable.

Before dusk he was blubbering on the phone to Marnie and of course she rushed right over. Marnie made him take a hot shower to clear his head. When Darren left the bathroom he caught a whiff of her cooking, somehow she had managed to put together a kind of goulash out of his Ramon Noodles and leftovers. They ate and talked, mostly about the lack of success they were having in the dating scene.

They went to bed and Darren found comfort in the old rituals of their lovemaking, even though he couldn’t help but notice she’d put on weight again. He almost lost his excitement at the realization but when he closed his eyes and imagined Leiko he found it again.

But that was hours ago and now he was disgusted with himself. One bad date and he had crawled back into Marnie’s arms?

How did she do it to me? How did she get me to cave in like that? He glanced over at her, She’s just like her food, not healthy, not particularly good for me. Just easy and comforting.

The murmuring started again, sibilant and gurgling. Darren closed his eyes and tried to make out the words but Marnie’s snores made it impossible to understand out more than the occasional syllable.

Glaring at her in the dark, Darren kicked off the sheets and walked over to the wall, it was cool to the touch, cooler than the rest of the room. He put his ear to it and shivered.

There was a sound like a windstorm, constant and shifting. The voice was faint, “…ancient …their kind …Beings from Outside”

The voice, Darren realized, sounded nothing like Chad. He wondered if he was hearing Crazy Agnes through some trick of the acoustics.

What am I doing here? Darren wondered, What am I trying to prove by living in this dump?

“Baby?” Marnie’s voice was slurred with sleep, “What’s the matter? Come back to bed.”

A realization settled on him, a realization that this was his last chance to put everything back the way it was before. Darren pulled his ear from the wall and rested his back against the cool plaster surface, “This was a mistake.”

“What?” Marnie’s voice was a yelp.

“You need to get dressed and go. Now.” Darren stared down at his bare feet, his hands clutched over his heart.

Email ThisBlogThis!Share to TwitterShare to FacebookShare to Pinterest
Labels: someone cool, something sad

The world ended on new years eve in 1979- then things got weird. 'Apocalypse Jones And The Race Against Time' a free ebook by Al Bruno III

Or read it online.

PLAID STALLIONS has made the realize my wife and I must start dressing like this!

And Mark Hamill as Pepe?

Like any addiction, it began slowly but surely. A smoker has that first cigarette and thinks it is fine. They don’t think about that last cigarette smoked on their deathbed as the cancer overtakes and ends their lives. With that initial puff of the cigarette, they are not aware of that insatiable urge, activating the voracious nature inside that will envelop their being and become who they are.

What’s one more going to hurt?

I sure wasn’t aware of the monster I was awakening inside my first time either...