Let's check in with the handsome and talented Brian Mansi (the voice of the Night Blogger)!

One week until our big move to our new less expensive, much nicer and probably not haunted home.  Ness has felt well enough to spend a few days visiting her Dad so that's good.

In other news some jackass stole the license plate off my roommates car so we have that to deal with. This happened while it was in the repair shop so they have to replace it so that kinda worked out but still... our luck is amazing sometimes.

That is why I am very lucky to have you folks.

And now that I have buttered you up please don't forget to make any kind of donation that you can. Moving expenses and doctor bills do NOT mix!

Who do I have to sleep with to get a Paternoster Gang comic for reals?

From TOYBOX
This delightful idea comes from the BBC themselves - it's from a framed print they've recently started selling... 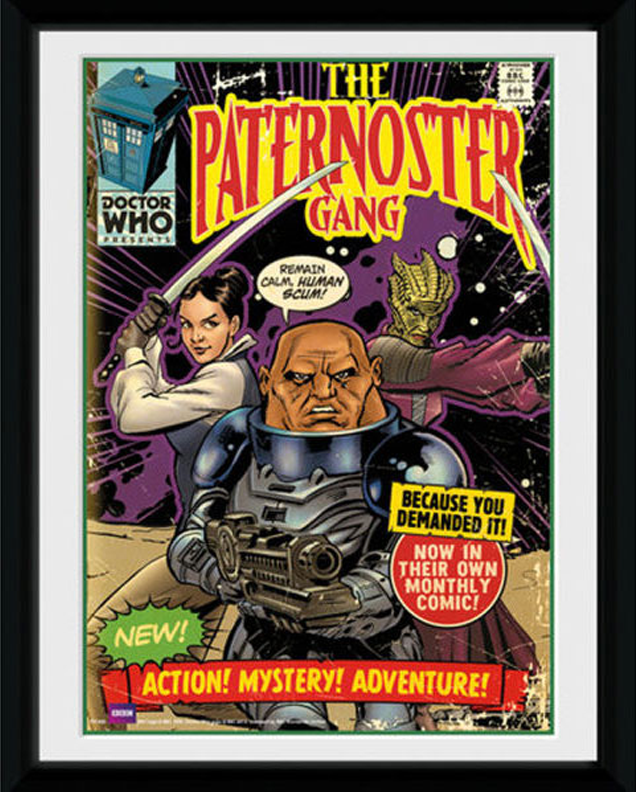 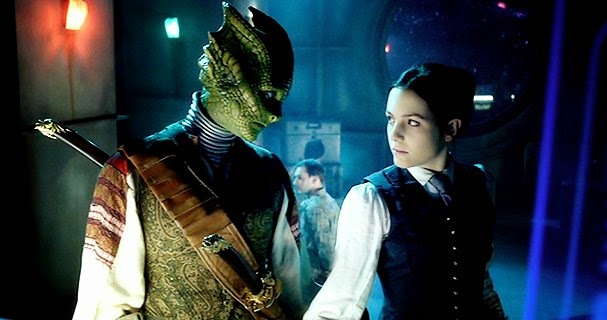 Everyone thought she had gone home hours ago, no one noticed her car parked behind a dumpster near the back of the complex. She hid herself in a cramped room with high shelves stacked with petri dishes, latex gloves and medical equipment. Alone there she waited, waited for the late shift to end and the custodial staff to finish their rounds.

Bored and terrified all at once Dr. Linda Harrison went over her memories one by one, examining them like samples suspended in formaldehyde.

It had begun for her five years ago, a young professor of primatology fresh out of school and swimming in debt. She had no family, and had been to busy for anything more than academic pursuits. The Balock Corporation's offer had been too lucrative to resist, she'd have her student and car loans paid off in two years if she was frugal enough. All she knew going in is that she would be working as a consultant for a team of cardiologists, urologists and geneticists.

She wasn't naive, she knew it wasn't the Goodall institute she was going to work for. These were ethically nebulous medical experiments involving primates, but she rationalized it she told herself that these weren't real apes these were livestock bred for only one purpose.

Of course it wasn't that simple, nothing in life ever is.

The apes had been genetically engineered with human DNA. The goal was to create a resource for transplants. Apes with blood types and cellular structures so close to human as to be a nearly universal match. It would mean an end to waiting lists and organ rejections.

To Linda it seemed so noble, yet so farfetched.

Most of the apes died on the operating table or as a result of flawed theories and experiments. Only one was kept alive, a control subject they had given the strange-sounding nickname of Jermyn. They monitored him to see if the altered apes would suffer any long-term problems.

A noise roused Linda from her thoughts, she pressed her ear to the door and listened. She recognized the voices of the security guards as they made their leisurely way up the halls. They were talking about sports, those two always talked about sports.

She waited a little while longer then she headed out, moving as quietly as she could. She used her passkey once to enter the secure wing and a second time to enter the wing that held the animal pens.

For some reason the memory of her first day of work flashed across her mind. She had to force her way through a gauntlet of animal rights protesters. They held up signs that proclaimed ‘A rat is a cat is a dog is an ape is a boy’ and went out of their way to sneer and spit on her.

Perhaps she should have taken that as an omen.

Since she was mainly on hand to maintain the apes and answer the other scientist's questions Linda tried to spend a little time each day observing Baylock Inc.’s new creations. She made notes and field reports. The altered primates were taller and more bipedal in stature than their ordinary kin. They were bright, imitative but prone to sudden outbursts of violence.

During her time there she had seen two of the ape keepers gravely injured and there had been uncountable near misses. Linda knew to keep well away from the cages, especially when she was alone.

But it was when she was alone that Jermyn made contact.

At first she had thought there was someone else in the room, and then she had thought that someone was playing an elaborate prank. It wasn’t until the ape called her name for a third time that she realized what was really happening and that realization left her shaking.

The memory of the encounter was still enough to make her knees weak as she made her way down the hallway. Perhaps fear was making her weak as well. This was more than just quitting her job, she was sacrificing her career- her future. The Baylock Corporation might never reveal what she had done but here tonight but they would use their every influence within the halls of government and academia to ruin her.

Very well, She thought as she entered the darkened hallway that contained the ape pens, ruin me then.

She flicked on the lights, momentarily blinding herself, when her eyes sight cleared she found herself staring at row after row of empty cages. Her heart caught a beat at the realization that they had already begun liquidating the test subjects. What if she was too late?

The pen at the far end, the largest one belonged to the control subject. It had a tire swing, climbing bars and toys. She ran down the short hall calling his name. When his gruff voice answered her back she almost groaned with relief.

The massive silverback paced before his cage, running his thick dark hands along the reinforced bars. She knew he was tense, she knew he hadn't been sure she'd come back for him.

Once Jermyn had spoken to her events began to move quickly. She analyzed the ape under the guise of a 'behavior / neurological survey' in addition to her other work. Alone, always alone she performed her test sand examinations. There seemed to be an unspoken agreement between herself and the ape that no one else on the research team should know about this. The solitude and late nights didn’t bother her, she had little else to look forward to.

Over time the testing became teaching. The ape's communication and reasoning skills grew by leaps and bounds, although his reading skills were never quite as strong as his ability to learn the spoken language. There was something about the nature of the printed word that he found mercurial and frustrating. Linda found it equally disconcerting to realize that as she was studying this creature he was in turn studying her. He appropriated her slang and gestures; here asked her questions about the world outside the research center's opaque windows.

There was something very trusting and knowing in the way that he looked at her. Sometimes he let her stoke his rich dark fur, sometimes she let him gently stroke her cheek. It amazed her that a hand so powerful could be so tender.

It took a year of study and notes before she was ready to reveal her findings. The reaction was nothing like she had expected. The project's director, a loathsome little company mouthpiece named Evans, seemed horrified and immediately began talking about legal and moral complications. He ordered the project shut down, the research team sent on to other endeavors, it's specimens catalogued and destroyed.

And that was what brought her here in the middle of the night with a stolen keyring in her hand.

"Lin-da" Jermyn said again, an edge of pleading had crept into his voice. “Hu-rry.”

Hurry she did, rushing down the hallway to meet him. Nervous and shaking she had to fumble thought each key on the ring twice before she found the right one. By the time the pen's reinforced door swung open both woman and beast were on the verge of hyperventilation.

She froze, recognizing the voice of the older security guard, and if he was there, could his partner be far behind?

Roaring with defiance Jermyn dropped to all fours.

"I don't think-" The younger security guard started to say.

Jermyn bounded past her, she fell back striking her head on the metal bars. Sparks flashed before her eyes rendering the chaos before her in strobe- like fashion. The guards had been armed in preparation for a moment like this but they never had a chance. Screams and the snap of bones echoed off the empty pens.

The abruptness of the attack left Linda speechless. She watched Jermyn methodically undress the older security guard. The corpse's neck jiggled and twisted with every twist and tug.

The dark blue uniform was too small in the arms and too tight in the chest- the shoes were a lost cause. It was a poor excuse for a disguise but when the ape buttoned the jacket he issued a grunt that could only be self-satisfaction.

All he's ever been is naked. She thought, He's spent his whole life in that cage watching us pass by him fully dressed and acting like a bunch of second rate gods. How could he have ever known anything more than envy?

For the first time the realization that for all his words and poise Jermyn was still a wild animal struck her.

And what was it that wild animals did?

Straightening up to his full height Jermyn approached her, his smile was gruff. He offered his hand and said, "We must leave."

Her confidence broke and she tried to scramble into the pen. He caught the door as she tried to swing it shut. "Lin-da? Don’t be af-raid.”

When he lifted her up she flailed and screamed but there was no one alive to hear. The ape held her tightly, pressing her against his soft fur. He whispered her name over and over again until she had calmed, until she had returned to her senses

Slowly, tentatively Linda reached up to stroke Jermyn's face. He leaned in and nuzzled her cheek. She could have pulled away now but instead she sank deeper into his embrace. They needed to get away from here, her car was waiting, and their future was waiting. A future she hadn't understood before this very moment.

From her NSFW blog