Diane smashed the portrait she'd painted of Tim and herself against her knee. She pulled drawers, swept the night stand, got rid of every memento and gift that reminded her of him. The anger still boiled. I'm just not attracted to you anymore.

She yanked clothes he bought for her from her closet, ripped each into rags. No loss on those; he still bought her clothes from two sizes ago. For when you get back to yourself, he'd said. She slid the wedding gown from the back, but stopped herself in the nick of time. Mom's wedding gown. Diane's first fitting was supposed to be Saturday. I'm just not attracted to you anymore...

TV's New Wonder Woman has a costume eerily similar to what I'm wearing as I make this blog post!

"...I dig the hell out of this costume. Pants! No inexplicable stars on her groin! And it's still totally recognizable as Wonder Woman! The top is a little corset-y, but certainly no more so than the Lynda Carter version in the '70s TV show. And yeah, the blue boots are weird, but I'll take it in return for the pants. Frankly, I still think the show will suck, but I'm 100% for this costume...."

The performance of 'Harry Potter Live' in MacArthur Park was cancled due to bad weather, but someone left a Snape out in the rain.

GEEKS OF DOOM made me laugh my considerable ass off!

Kevin David Anderson, author of Night Of The Living Trekkies, sent us a fun greeting for St. Patrick’s Day which mashes up the evil Leprechaun from the Leprechaun horror movies, with Star Trek‘s beloved Captain James T. Kirk in “Leprekhhhaaaaaan!!!”

click here to read the rest at GEEKS OF DOOM

Email ThisBlogThis!Share to TwitterShare to FacebookShare to Pinterest
Labels: lovable links, something fun

Captain Hero didn't like teaming up with Sanchez the crimefighting sailor, he had a dirty reputation.

The Nick Of Time (and other abrasions): Linger 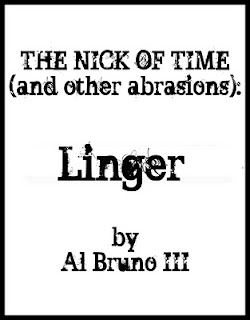 BENNINGTON -- An East Street man said he was minding his own business and shoveling snow away from the side of his house when he was attacked.

"All of a sudden I felt something on my back and shoulders, scratching," said Kevin McDonald, of 15 East St.

It was a gray squirrel, said McDonald. He threw the animal off, but twice it jumped back onto his arms, delivering more scratches. Finally, it ran up a tree and McDonald retreated to his house.

"The first thing that goes through your mind is ‘is it rabid?’" he said. After doing some research into the matter on the Internet, McDonald said he learned bites are the real concern with rabies infection, and squirrel attacks are quite rare.

Which is why he was surprised the next day, when his wife reported hearing yelling from across the street. He said he looked to see his neighbor with a blanket and a metal pole battling a gray squirrel not unlike the one that attacked him the day before. Later, he would learn that a woman on the same street had also been attacked.

While the incident is on the amusing side of the spectrum for him, McDonald said it was a bit eerie to have the squirrel not only jump him, but jump back onto him after being thrown off.

It wasn't until she saw her husband in his donkey costume that she realized the dangers of marrying a man with an ass fetish.

No one liked to talk about Mack the Knife's idiot brother Ted the Spoon.

The only drawback to the new computerized footwear was the constant rebooting.

You're so vain, I bet you think this tweet is about you.

DALLAS - A hapless bank robber who abided by a Dallas teller's request to provide two forms of identification before she could give him money is going to prison.

A judge sentenced 49-year-old Nathan Wayne Pugh of Sachse to more than eight years on Tuesday.

Pugh tried to hold up a Dallas Wells Fargo Bank in July. The teller stalled Pugh by telling him she needed to see two forms of ID. Pugh showed her his Wells Fargo debit card and a state ID card. He was captured as he tried to flee with $800...

(Recommended Hotness) Fay Daniels is having a bad week... but she is SO kyooot!

THE DRUNKEN SEVERED HEAD helps you to help Japan

by Max the drunken severed head
Here are some highly rated charities working on disaster relief in Japan:

Red Cross (through Network for Good)

DAY OF THE WOMAN talks about the Slender Man. (Who is not real but may be standing right behind you now!)

Enter: Slender Man. The Slender Man is a fake mythical creature completely created on the forums of SomethingAwful which has since grown to be a psuedo-meme and invaded more than it's original forum. He's become the target of numerous deviantART pages, youtube channels, and fanfictions. The brain child of Victor Surge, The Slender Man is usually shown as a tall and thin silhouette, wearing black pants, a black suit with a white shirt, and a black necktie underneath. He's normally depicted without a face and has the ability to stretch and shorten his arms as well as sport some crazy tentacle type things. Think if "The Tall Man" from Phantasm and Doc Ock from Spiderman had a baby...

Brian is a terribly average guy. He lives in a passable New York City apartment with his brother and spends most of his free time with his loving girlfriend. Unfortunately for Brian, the neighbors in the apartment above him are neither average nor are they passable human beings. For years, they have been harboring an ancient parasitic brain worm named Aylmer who injects a highly potent narcotic directly into the cerebral cortex of those who in turn offer him delicious brains as tithes. Aylmer derives his strength from human brains but the neighbors have been feeding him animal brains to keep him weak enough to control but strong enough to get their fix from his venom. Unfortunately, for everyone, Aylmer escapes and finds his way onto the brain stem of poor Brian who instantly gets addicted to the venom. Will his craving drive him to commit murder to satisfy Aylmer’s hunger for human flesh?...

Drew Daywalt reminds me to call my Mom!