The Nick Of Time (and other abrasions): Audra DiMico And The Curse Of The Cartwrights


The Nick Of Time (and other abrasions) 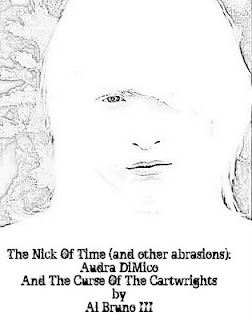 
They huddled together, hiding from the men with guns, but Audra wasn't afraid; while the city of Olathoe was filled with men with guns, it also had no shortage of places to hide.

They were holed up in a long abandoned brewery, the floor was littered with glass smashed bottles and faded pamphlets. It was good enough for now but she had to get back to her dormitory.

She glanced at the boy huddled nearby, his name was Iphot and he was beautiful. He looked her age if not a little younger. His milk white eyes and Chinese features combined to create a fragile beauty.

Just looking at him made her feel frumpy, her dark hair was a tangled mess, her dress was stained and torn. A lot of men found Audra pretty but for all her bravado she rarely agreed with them. Of course it was hard to stay fresh as a daisy when you were on the run.

“Audra,” his voice was like music, “where are we?”

“An old hideout, a temporary base of operations for whores and revolutionaries. ” she said, “and at least the whores had the courage of their convictions.”

“I was to be a something worse than a whore. They taught me secrets, I begged them not to.”

“Well not now,” she scrabbled over to him and took his hand. He started at the sudden motion and Audra cursed herself for forgetting he had been chemically blinded. As far the Kuen-Yuin were concerned their handsome new plaything didn't need eyes to preform his duties. “Come on. Let's get moving. I think it should be all clear.”

Audra hushed him, “Hold your breath now, long as you can.” She whispered a minor incantation, something to make them less noticeable. It was better to be safe than sorry, especially when dealing with the likes of Jack Diamond.

How could she not shudder at the very thought of Jack Diamond. It wasn't too long ago that she had almost made her into a plaything of his very own. She had been saved by an Outlander, a hapless man named Matthew. She had fallen in love with him but he had been lost to her, lost to her by the Curse of the Cartwrights.

They made it all the way to the next street before Audra had to take a breath, the incantation fell away but she knew that if they could just reach Haruspex Boulevard they'd be home free.

A voice called from a nearby car, “There she is!”

“Sonofabitch!” Audra grabbed Iphot’s hand and started running. There was never a damn Sentry around when you needed one. Footsteps clattered after them, the sound of expensive shoes on asphalt.

Was this to be her lot in life? Putting everything on the line for one lost soul or another? She could almost live with that if once, just once, she won out.

Audra called it ‘The Curse of the Cartwrights’ in honor of her father’s favorite TV show, a western called Bonanza. The men of the Cartwright clan were gold old fashioned cowboys but they had the worst luck in the world when it came to love. If one of them fell in love within the first fifteen minutes you knew that by the end of the episode they would waving a sad goodbye or standing be standing over a grave.

It was just like her life, ever since grade school; each time she fell in love she was robbed by death, dismemberment or circumstance.

Up a fire escape and down a flight of condemned stairs, through an alley and over a loading dock; she ran, dragging him after her.

Soon enough they had found somewhere else to hide, a darkened brownstone that had been half burned away in one riot or another. The air was thick with ghosts, Audra inhaled deeply.

“You should have left me,” he still had hold of her hand, he wouldn’t let go.

She smiled, “I couldn’t do that, not after what they did.”

“Why were you even there?” Iphot asked, “Were you a guest?”

“Oh hey now,” she gave him a little hug. That hug led to a kiss and suddenly they were undressing each other, laying their castoff clothes down on the scorched floor. His touch fluttered over her skin. By the time she realized he was a eunuch she was too aroused to even care or comment and his cock was as rigid as any other boy she had been with.

When it was over they dressed quietly, Audra didn't know what to say, she never did at moments like this.

Iphot stepped towards the doorway. He whispered “They’re here.”

“What?” Audra said but her hands were already making preparations for one of the deadlier incantations she knew. As long as there were no more than three of them they were still going to make it.

“I can hear their footsteps coming up the stairs,” he turned his head in her direction. “They’ll never stop, not when I know what they need.”

“I know another way out,” Audra shook her head, “I won’t let them hurt you.”

Iphot ran out of the doorway screaming like a madman, one of the Kuen-Yuin shouted in alarm and fired. As the stairwell filled with curses and recriminations Audra slipped out of the building and headed home. Her clothes smelled like old smoke and sweat, she only kept herself from crying by whistling the theme to her father’s favorite TV show.
Posted by at 1/21/2010 08:15:00 PM

Email ThisBlogThis!Share to TwitterShare to FacebookShare to Pinterest
Labels: friday flash, Mythology In Progress, The Nick Of Time (and other abrasions)