*Another New Ebook!* 'In This Twilight'

Download my stories to your computer, tablet or eReader!

The Nick Of Time (and other abrasions): Rites Of Passage

Apocalypse Jones And The Race Against Time (a Local Heroes story)

Price Breaks And Heartaches Volume One

The Nick Of Time (and other abrasions): Shadows Of Polaris

The Nick Of Time (and other abrasions): A Heart Full Of Dust

The Nick Of Time (and other abrasions): Acquainted With The Night

The Nick Of Time (and other abrasions): Blood And Tinsel

Corpse Wars 2: Attack Of The Crones

In The Midnight Of His Heart

The Binder Of Shame Presents: The RPG.net Rants

Love And Treason On The Verge

What we must never ever forget...

Email ThisBlogThis!Share to TwitterShare to FacebookShare to Pinterest
Labels: something true

Download my stories to your computer, tablet or eReader!

The Nick Of Time (and other abrasions): Rites Of Passage

Apocalypse Jones And The Race Against Time (a Local Heroes story)

Price Breaks And Heartaches Volume One

The Nick Of Time (and other abrasions): Shadows Of Polaris

The Nick Of Time (and other abrasions): A Heart Full Of Dust

The Nick Of Time (and other abrasions): Acquainted With The Night

The Nick Of Time (and other abrasions): Blood And Tinsel

Corpse Wars 2: Attack Of The Crones

In The Midnight Of His Heart

The Binder Of Shame Presents: The RPG.net Rants

Love And Treason On The Verge

For a decade mad scientists and 'Seinfeld' fans experimented with Wayne Knight's DNA, the final result was the Newman Centipede.

Before you take your true love in your arms and say “Don't ever change.” You better damn well be sure they aren't a werewolf first.

Low-end superheroes and standup comics have a lot in common- late hours, seedy neighborhoods and the risk of regular beatings.

There was a clear boundary between ordinary flatulence and crapping your pants and every day Jenkins walked the line.

Derrick sold fake poultry by the truckload so it was inevitable he would be arrested and charged with Fraud Chicken.

"Obamas" - written without an apostrophe in accordance with Swedish grammatical custom - serves falafel, kebab and sausages, prepared and served by Amro and Soumia Hawary, who opened up shop almost three years ago.

“I named it Obamas because I really like the American president Obama,” said owner Amro Hawary to The Local.

“I have followed his career since he was in Chicago, a few years before he was president.”

You can't see Obamas from the main road and there is not a lot of traffic flow to help you find your way. But, thankfully, there is a giant Obama head on a "Falafel, kebab and sausage" sign on the main road, directing the way to the little cart...

Plattsmouth's long ninja nightmare came to a close Wednesday afternoon when a cow that had been roaming its streets since mid-September was finally corralled.

Police Chief Steve Rathman said the animal — dubbed the ninja cow because it grazed on lush city lawns at night and then vanished when people approached — was captured about 1 p.m. on the north side of town. Terry Grell of Louisville, Neb., Neil Johnson of Nehawka, Neb., and Gregg Eisenbarth of Plattsmouth caught the cow on horseback.

Grell said the trio tracked the cow in the morning, moved her into an open area with a trailer nearby and then allowed her to calm down before using their ropes for the capture. The cow calmly walked into the trailer for a ride to Grell's place outside of Louisville.

“It's nice that the she was taken care of without harm,” Rathman said. “We did everything in our power to humanely capture (the cow) and I'm very glad it ended as it did...”

BUZZFEED has the '25 Most Awkward Photos With Santa'

Here are my faves...

For the rest stop by BUZZFEED

...The case was unusual from the start.

In January 2004, Mr. Petraitis, 69, and Sandra Rinella, 47, were accused of hiring Ms. Rinella’s former husband, Kerry Anderson, who was a biker and former convict, to kill the businessman’s wife of almost 40 years.

One clue comes from Mr. Petraitis wearing a diaper during his first meeting with the would-be hit man….

In some ways I feel the Sifl and Olly version of the Cars 'Just What I Needed' is superior to the original...

Then again I do love puppets...

Email ThisBlogThis!Share to TwitterShare to FacebookShare to Pinterest
Labels: something cute, something silly

When it's Batman vs Steve Buscemi we all win!

(Insane News Double Feature) Would you rather have a robot girlfriend or a pet wooly mammoth?

Both articles are from BUZZFEED

Lets start with the robot chick shall we?

And now the article and image from TREEHUGGER.COM

Thousands of years ago, Wooly mammoths were pretty much wiped off the face of the Earth from a likely combination of climate change and over-hunting from humans. But now, about 450 generations after our ancestors armed themselves with sharpened sticks to kill mammoths, scientists are now working to revive them -- and they're actually incredibly close to doing it. Japanese and Russian researchers are suggesting that in just five short years the currently extinct Wooly mammoth may roam again thanks to advancements in cloning science, offering a bit of hope for countless other species that have already perished at the hands of humans.

A report from PhysOrg outlines the surprisingly-easy sounding process of bringing an extinct species back to life:

By replacing the nuclei of egg cells from an elephant with those taken from the mammoth's marrow cells, embryos with mammoth DNA can be produced, Kyodo said, citing the researchers. The scientists will then plant the embryos into elephant wombs for delivery, as the two species are close relatives, the report said...

Tales of paranormal romance for people that couldn't get laid in high school! 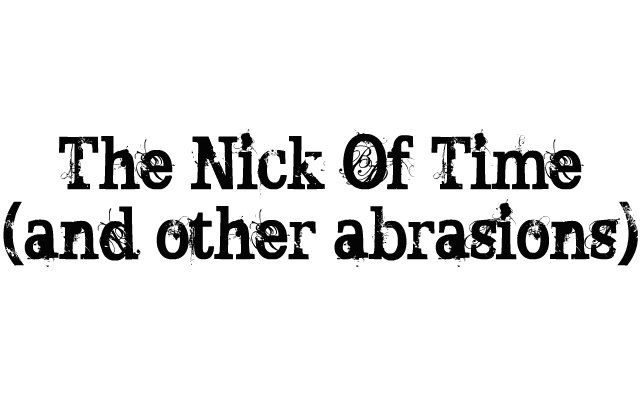 Everything you know is wrong- there are plenty of gods but no afterlife, wizards plot rebellion against eldritch horrors with marketing departments, the Chinese Mafia runs the phone company, every tarot card is a prophesy waiting to happen and most vampires live in trailer parks. Read on to visit a world where every cliche is a parable, every fairy tale is bad advice and every dream leaves a ghost in its wake...
Why not listen to the suggested soundtrack on 8 TRACKS?
Art by Chris Scheetz, Wayne Anderson, George Vasilakos, Ryan Dunlavey and Vanessa Lee
at December 05, 2011 No comments:

Email ThisBlogThis!Share to TwitterShare to FacebookShare to Pinterest
Labels: fridayflash, Mythology In Progress, THE NICK OF TIME and other abrasions

And today's musical interlude comes to us courtesy of Greg Kihn... SING IT!

Apparently he started following me on Twitter. Whoda thunk it?

And in honor that here is the video for his song JEOPARDY. A video that combines the stress of getting married with mind-blasting otherworldly horrors.

And he writes horror novels too?  Check out his webpage for more.

And you wanna talk horror Greg? We should discuss my wedding reception sometime...