THE LOCAL HEROES PRESENT: Apocalypse Jones And The Race Against Time 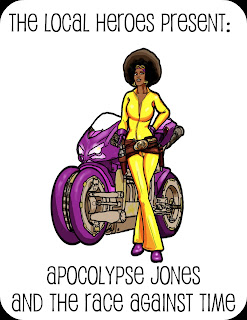 Prologue: The End is The Beginning

Chapter One: The Planet Of The 70’s

THE LOCAL HEROES: Apocalypse Jones And The Race Against Time - Chapter Two

Chapter Two
Beneath The Planet Of The 70’s

“What’s wrong with that?”

They were in a bunker deep beneath Megalopolis’ It had been designed to withstand a nuclear attack so keeping out the jackal-things and polyester-clad zombies was no trouble at all.

“Yeah well...” Sidney Tibbs shrugged, “Better than Hawkguy or Man-Bird or something like that.”

There were only forty people living here, a few civilians, a handful of soldiers, one superhero, one villain, a super scientist and a living legend.

Sidney was the super scientist, he had developed a jet suit for NASA but pulled all his research when he was pulled from the test flight in favor of a ‘less controversial’ choice.

And by that the brass meant they wanted someone that wasn’t black.

“I really thought I could make a difference,” Sidney said wistfully. He had motorcycle parts spread out across his workspace, he was trying to reassemble a Kawasaki Kz1000 motorcycle but was missing more than half the necessary parts, “Like ShadoMask or Amoeba-Man.”

“You don’t need to be a superhero to make a difference,” Annabelle said. She had finished inspecting and inventorying the munitions yesterday and was now cleaning and repairing the best of the lot. Colonel Rictus said they would need them soon, “But go on.”

Sidney groaned and shook his head before continuing, “The jet suit I made then was a lot nicer than the one I have now. I waited until dark before I took flight and it took me a while to find a crime in progress.”

“What kind of crime was it?”

Before he could answer her the sound of arguing filled the main room of the bunker. Frogman and Lady Indigo were arguing again, about ‘Plan Omega’ no doubt. Lady Indigo was dressed in shades of blue and violet, even her skin was that color. She was a powerful, megalomaniacal sorceress, a supervillain of the highest order but and she had promised Colonel Rictus she would help him save the world.

Then later on she would try to rule it.

Frogman had been the defender of Stone City, his costume was green, rubbery and topped with an elaborate helmet that looked like a frog’s head. For all his good deeds his career had been plagued by scandal, there were rumors he was romantically involved with his teenage sidekick and on two separate occasions he had been arrested for driving the Frogmobile while inebriated. Those scandals hadn’t dulled his popularity however, the citizens of Stone City loved him warts and all.

Annabelle found it funny that in the close quarters of the bunker the only thing the clashed more than those two’s color schemes was their personalities.

“It was an armored car robbery,” Sidney explained. He paused to examine a pair of spark plugs, one he threw away the other he kept, “It was tipped over and the guards had been thrown every which way. I had caught the thief red handed.”

“Who was it?” Annabelle asked.

She looked up from the M16 she was cleaning, “You went after Crazy-Face?”

“He crushed my pelvis with his bare hands,” Sidney shook his head, “for a man with a lava lamp for a head he was surprisingly strong.”

“How did it happen?”

“He grabbed me out of the air and said ‘I don’t know who you are but I’m going to crush your pelvis.’”

Annabelle winced on his behalf, “And that was the end of your crime-fighting career?”

“I’m lucky that wasn’t the end of my life!” he laughed. “Just as well, Peregrine is a pretty bad name.”

“You should hear what the punks in the neighborhood used to call me-” Annabelle caught herself.

“Oh really?” He looked up from his work, “What did they call you?”

“It wasn't a superhero name,” Annabelle felt herself starting to blush, “it was just something they called me behind my back.”

“You think I’m gonna tell you so you can call me it to my face?” she gave him a little wink and hoped that would be enough to shut him up about the whole subject.

“Attention!” The sound of a bullhorn echoed through the bunker, “I need everyone to the monitor room. Even you Professor Tibbs.”

Soldiers and civilians alike started streaming into the main hallway. Frogman and Lady Indigo brought up the rear, still oblivious to everything but their argument.

“I am never going to finish my work at this rate!” Sidney had been trying to attach a quantum fusion generator to a carburetor.

The monitor room was just that, a room full of sensors and video monitors. In a time of war it would have been used to track enemy movements and plan strategy, now all but the largest of the screens were dark and those screens only showed readouts and video from Skylab. Annabelle and Sidney joined the gathering crowd.

At the other end of the room stood a living legend from World War II- Colonel Rictus.

That wasn’t his real name of course, his real name was classified. He had earned his nickname because his face was permanently stuck in a war-like snarl, a consequence of his being injected with the Commando Compound. The Allied forces had hoped to create a squad of soldiers that were invulnerable and immortal. The man that came to be known as Colonel Rictus was the only test subject that hadn’t been killed by explosive dysentery within twelve hours of receiving the injection.

“Settle down everyone,” he said. His voice was deep and wintery, “I have some important news. Plan Omega is being moved forward.”

“What?” Sidney shouted, “We’re not ready. We’re not even sure-”
“We don’t have time to be sure!” Rictus said, “The new readouts confirmed what we’ve already suspected. The Earth is in the process of turning itself inside out. We only have three weeks left before the end.”

AWFUL LIBRARY BOOKS presents a book that a manly, sweaty guy like me will never need!

Car keys in one hand and his cell phone in the other Darren headed out for work, his mind was already on his plans for this evening. It was just a few drinks with some guys from the office but Darren thought it would be the perfect time to test the waters and see if he had his dating mojo back. He’d been quite the player in college and that wasn’t so long ago now was it?

He almost collided with the old woman standing on his doorstep. She was naked except for a tattered, mostly open bathrobe and swayed in place. Darren drew back from her, "The Hell?"

“What are you talking about? Who are you?"

Shuffling, ponderous, footsteps started to echo up the stairwell, every few steps were punctuated by the sound of labored breathing. The old woman's face grew pale and she fled into the apartment on the opposite side of Darren and locked her door.

Chad Lunt made his way onto the landing, there was a thick parcel under one of his flabby arms. He was wearing a bright orange muscle shirt and dark baggy shorts. "Morning," he wheezed.

"Morning." Darren said, "You know I was meaning to talk to you-about-"

"I see you met your other neighbor." Chad drew closer, heat and odor radiated off his body, "Crazy Agnes. She's schizo or something. Too nuts to have a job but not nuts enough to be locked up."

Darren looked back towards her door, "She seemed a little out of it.”

"She probably isn't taking her meds. The meds I bet your tax dollars pay for."

"Is there anyone we should call?"

"You wanna get sued? Just leave well enough alone. She probably won't burn the place down and the damn landlord won't kick her out as long as he's got those government checks coming in."

"Actually, I wanted to talk to you about something..."

"I got them off EBay, they're reproductions of Tibetan spirit masks."

"I have all kinds, Melanesian skull masks, old Halloween false-faces, ceremonial Eskimo masks- I have a little bit of everything. Reproductions mainly, who can afford the real thing these days?"

"My sociology dissertation was on the subject, it was called Vizards and Veils: The Transformative Evolution of Masks. It would have been groundbreaking, too bad some cunt with an associate’s degree had to go and decide she couldn't take a joke. Too late to cry about it now."

"Late? Oh man." Darren checked his watch, and realized that if he ran every yellow he might just be on time for work, "I've gotta get going."

Darren ran down the steps, Chad still trying to talk to him all the while, "Working for The Man eh? A smart kid like you should be self employed like I am..."

Michael Bukowski gives us a glimpse of the liveliest awfulness!

stop by YOG-BLOGSOTH for more!