The Nick Of Time (and other abrasions): Behind The Panic Room Door 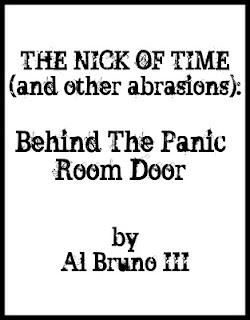 Behind The Panic Room Door
by
Al Bruno III
Something had gone wrong and the realization of this fact made Earle Gorsek break out into a cold sweat. He was nineteen years old, handsome and rich, being afraid was a new sensation for him and he didn't like it. Not one bit.
For a full five minutes he sat in his leather recliner looking around the dark room. There was a glass of expensive scotch in his right hand, his grip tightened on the tumbler as he listened and waited. Earle tried to tell himself that it was just a power outage, nothing to worry about. That his father's men had seen to the vengeful stranger.
Then why had the power gone out? It wasn't like he was in the middle of a thunderstorm, and his bills were all paid up. His bills were always paid up.
Once his eyes had fully adjusted to the dark Earle got up and headed for the panic room near the center of his house. With the power out the alarm system people would have already contacted the sheriff's department. Again and again Earle assured himself that if the District Attorney couldn't touch him then neither could some weirdo with a gun fetish.
It was only after he had the panic room door closed behind him that Earle realized he had left his cell phone on the coffee table. Whenever he was in trouble his first instinct was to call his father but he was on his own now. Earle didn't like that one bit either.
With his cell phone out of reach Earle retrieved the pistol he kept in the panic room. As he reached for it he realized he was still holding his glass of scotch. He drained it before setting it down. The pistol was a snub nosed .38. It had been given to him by his father's bodyguard. That was back when the only thing Earle and his friends had been worried about was reprisals from the family of Tommy Dobson.
But the Dobsons had left town, Earle's father had seen to that and they didn't have the money to hire a hit man to do their dirty work. Earle's father had seen to that as well.
Then why was this happening? Why had each of the guys that had been involved in that cold February night turned up dead?
“He ain’t human! He can do magic!”
That was what his drinking buddy Patrick has said before begging Earle and his father for the money for a plane ticket. He wanted out of town, out of the country if he could manage it. Earle’s father was only too glad to hand him a wad of cash, Patrick was spooked and spooked men could talk out of turn.
Patrick never made it to the airport. He had hung himself in his apartment. A suicide, at least that was the story the press was going with.
“The gun’s empty,” a smooth voice said.
Earle screamed and pulled the trigger of the .38 anyway. It clicked impotently. The vengeful stranger stepped closer. He was a black man, in fact, his skin was so dark it was almost purple. He wore his hair in long graying dreadlocks that he kept pulled back from his face with a ribbon. He had an automatic pistol in one hand and a baseball bat slung over one shoulder. His expression was smug and catlike.
“Wait...” Earle said, “Just wait... Seth right? Your name is Seth?”
“Zeth,” the man corrected.
“My Dad’s a very rich man...”
“This was never about money.”
“Then what the fuck is it about?”
“You broke every bone in Tommy Dobson’s body and left him to die by the side of the road,” Zeth said, “that’s what this is about.”
Earle threw the useless gun at him and missed completely, “But you didn’t know him! You’re not even from here!”
“You killed a man.”
“It wasn’t my fault! He hit on me. He gave me...” Earle paused trying to remember the phrasing his lawyer had used, “He made me temporarily insane! I had a gay panic attack!”
“He hit on you so you killed him,” Zeth chuckled mirthlessly, “you went temporarily insane but first you let him buy you a drink and arranged to meet him in the park. Then you got all your friends together and headed out there. Quite the panic eh?”
The sound of his cell phone ringing spurred Earle into action. He threw open the panic room door and ran for the parlor. Was it his father? Or the sheriff? It could be the king of the queers for all Earle cared so long as they helped him, so long as they made-
Zeth fired his pistol, neatly shooting out Earle’s knee. He squealed and fell but he still managed to grab hold of his phone.
“He’s here!” Earle shouted into the cell phone.
The vengeful stranger was approaching, slipping the pistol into his loose jacket and getting the baseball bat ready.
“He’s gonna kill me! Please he’s gonna...” Blood was pooling out from his ruined knee, the pain was worse than anything Earle could have imagined but he forgot it as he listened to the voice on the other end of the line. When Zeth was standing over him Earle raised the phone up and said, “...it’s for you...”
Cocking his eyebrow Zeth took the phone and put it to his ear, then he rolled his eyes, “Magwier. I’m busy... No... It’s a personal project.”
Earle started to crawl away but Zeth pinned him in place by jabbing the bat into his blooded leg. Earle started to weep.
“Right... Right... I’ll be there.” Zeth threw the phone aside and turned his attention back to the man at his feet, “Tears Earle? Did tears help Tommy Dobson?”
“What...” Earle Gorsek’s face was all tears and snot, “What are you gonna do to me?”
“Something...” Zeth hefted the bat, “...apropriate.”
at March 04, 2011 5 comments:

TOPLESS ROBOT brings us one of the songs from the Spider-Man musical...

So... what do you think? Let Topless Robot know...

5 Second Fiction One Thousand Nine Hundred and Twenty One

As far as she was concerned politicians talking about Family Values was roughly akin to Eskimos singing about Sweet Home Alabama.

The joy of finding a girlfriend that was into auto-erotic asphyxiation left Karl all choked up.

The geometry teacher always interfered with his students' personal lives forgetting that fools rush in where angles fear to tread.

Abner Deggent frequently remarked that the only person more manly than him was his ex-wife. Then she found out.

Amazing Ed wasn't the first superhero to notice that the more you were the more teams you ended up joining.

A newspaper typo swapped the last letter of Captain Hero's name with a 'P' causing no end of embarrassment and dating problems. about 2 hours ago via web

I still miss you George!

This is a long distance dedication to my buddy Wayne. I miss you man.