...we see Bigfoot rising from the underbrush like a zombie from his grave, as drawn-on lightning flashes from a clear blue sky! Luckily he's within striding distance of a nice-looking KOA Kampground, where a headkerchiefed hippie lady has just finished an afternoon rowboat excursion and climbed out onto the bank to shed all her clothes and take a nap. Like you do. Overcome by perfectly natural acquisitive desires, the stealthy manbeast quickly lopes up, snatches the hippie, and spirits her off to his woodland abode. To what dark purpose we can only conjecture and fear!...

More min/MAX comin' at ya!

Email ThisBlogThis!Share to TwitterShare to FacebookShare to Pinterest
Labels: Al Bruno III has no dignity, Francis Hogan Knows Where You Live, minMAX, webcomic 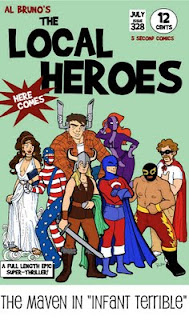 Infant Terrible
by
Al Bruno III
The River City police station had only one interrogation room. A two-way mirror dominated one side of the wide chamber, the other walls were painted a dull shade of blue. There was a table and two chairs in the center of the room. A woman sat in one of the chairs, her clothes were black but her apron was white and covered with unpleasant-looking stains. She scratched idly at her hair net with one of her cuffed hands. Her face was egg-shaped and she wore far too much makeup. Her eyes were cruel and unblinking.

The thick metal door to the interrogation room swung open. The figure that strode up to the bare metal desk wore a purple costume and cowl that hid everything but her long red hair. “Julia Infant,” she began, “the Mad Chef of Schenectady.”

The florescent lights buzzed. The Maven sat down in the empty chair, “What did you expect? Everyone else on my team is busy cleaning up your messes.”

The other woman chuckled, “Yes. I imagine it has been a long night for you, and it the night isn’t over yet.”

Just after sunset River City had gone mad with crime; violent bank robberies, random assaults, and explosive jaywalking. A cloud of mayhem had descended upon River City and that cloud was heavy with the odor of fresh bread.

The Maven knew it was all to distract the police and superheroes from the Mad Chef's real goal. She said, “You failed to steal the Cursed Spoon Of Nephren-Ka and you’re in police custody. It’s over. We just have to deal with the last of your dough-boys.”

“Actually I prefer the term People of Cruller.”

The Maven's cowl hid her entire face but there was no disguising the menace in her voice. She leaned forward, “No puns. Do you hear me? No puns ever.”

“Puns? Is that your weakness? Your soft center?”

This was all the Maven needed, fights, car chases and exploding robots made from pastries she could take but she had no patience for mayhem of a paronomasiac nature. Especially not when one of her team mates had been nearly blinded by toxic frosting. “Where are the hostages?” she said.

Any time the mayor, the chief of police and a visiting celebrity were all kidnapped it was a bad sign. It was an even worse sign when all three men were former superheroes.

Julia Infant put her feet on the table and leaned back. “I may be in your little local jail but as long as I have them I’m still in charge.” She laced her cuffed hands behind her head, “And you thought all my little schemes were half-baked.”

“It must be so much pressure!” the villainess burst into laughter. Then she hit the Maven with all the force of a lunch lady linebacker. “Your teammates are brawlers, wizards and but you! You’re supposed to be the world’s greatest detective.”

“I’m not here to play games with you!” The Maven said as she was driven back into the wall with bruising force.

They retreated to opposite ends of the room. Julia Infant grinned, “See I’m just a small town chef turned criminal but I've given you a meaty dilemma. Now the question is do you have the chops?”

The other woman pulled free of her grip and backed away,“You think you’re Sherlock Holmes in spandex! What of you don’t find them in time?” Julia Infant rubbed her hands together in anticipation, “I want you to give me the Spoon and let me walk out of here. You do that and the hostages go free. You’ll get them all- the mayor, the chief of police and Gordon Ramsey. I’ll hand them to you on a silver platter. If you don't, you're gonna end up with egg on your face.”

The Maven looked the other woman up and down, then she spoke into her two-way wrist communicator, “Captain Hero? They're on the North side of town, in the old metalworks. Be careful, the doors are booby-trapped. Gunpowder bombs with tripwires.”

"There’s fresh asphalt on your shoes,” the Maven righted one of the chairs and offered it, “that told me you were operating on the North side of River City. There are extensive road repairs going on in preparation for the opening of the new international bottle museum. I also noticed an insect bite on your neck. It’s too small to be a mosquito and the wound shows signs of minor skin necrosis. The old metalworks is known to be infested with brown recluse spiders.”

“There’s gunpowder on your apron and a slight cut on the left thumb of your glove. A sure sign you were using piano wire for booby traps”

“So you’ve lost your hostages, all your plans have failed and you are going to jail for a long ,long time.” The Maven started to leave but then paused,“As you might say, it’s your just desserts.”

The slamming of the thick metal door muffled Julia Infant's scream of outrage.

Visitors at the Terraces Picnic Area in Millcreek Canyon saw more than a scenic landscape on Sunday when authorities arrested two men, including one suspect who allegedly wandered around picnic sites with his pants down to his ankles while yelling obscenities.

Rangers for the U.S. Forest Service arrived in the picnic area after witnesses called to report a partially nude man, who at one point shouted out concerns about “f------ bears,” according to charges filed Tuesday in U.S. District Court....

Nunlist-Young was able to provide officers with a description of Bittle’s vehicle, which officers found parked in another area. An officer found Bittle in the vehicle “spaced out and acting like a 5-year-old,” charges state...

(Opinions wanted) Just tidying up my stories KOEHAHA and TROCHILDAE...

Wanted to add a little dash more of Lovecraft and correct any typos. What do you think? 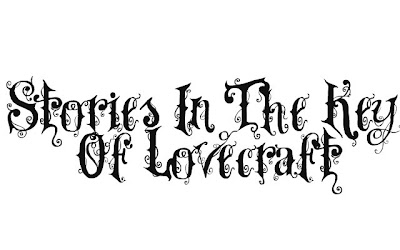 (This is true) Last night at dinner...

Last night at dinner I thought I had grabbed the ketchup from the fridge it was only after I had taken a bite of my burger that I realized I had slathered it in strawberry syrup and mustard. I still feel queasy.

This week's installment of FOREPLAY ON THE EDGE OF FOREVER is delayed. My wife's hospital trip and the stress that came with it put me a little behind schedule, well that and overtime at work.