DEADLY DOLL'S HOUSE OF HORROR NONSENSE reviews the mediocrity that is CASE 39...

Remember how I justified my recommending The Crush for its one scene featuring Cary Elwes punching a 14-year-old Alicia Silverstone with all the might of Thor? I'm giong to spoil my review of the very mediocre Case 39 with the one reason worth watching it:
The little girl calls Renee Zellwegger Pumpkinhead. 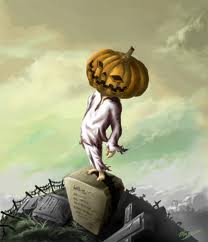 True, it would have been more appropriate if sour lemons were also involved, but it was still enough to make me spit out my pumpkinhead latte...
click here to read the rest
at February 18, 2012 No comments:

Early in the morning, a deliriously excited group of research scientists from the SETI Institute gathered to listen to and analyze - incredible - an alien radio wave signal that they had been recieving every ten minutes since three AM. Over sixty years had lapsed since the original radio signals had been beamed into space by hopeful, forward-thinking men, and now they were getting a reply. It was a top secret meeting. The group played the transmission several times at the begining of the meeting, first in awe, then with rising disquiet. It was an indescribable, harsh, nasty ten-second blast of noise, and it induced a strange, splintering headache in all of them.

Ten minutes later, a trusted research assistant who was present at the meeting suddenly doubled forward and sprayed vomit across the board table. His nose began to bleed profusely and he stumbled around the room, bellowing profanities. The scientist whom he assisted, a small Japanese woman, rushed over to quiet the man, and was smashed with lethal force in the face by a metal stool. The raving man was subdued, but he continued to thrash and snap his teeth, and was finally chemically sedated...

The Nick Of Time (and other abrasions): Route d'abbaye Track Five- Octopus's Garden

The Nick Of Time (and other abrasions)

Of the three Post-Blavatskyian religions that had made the city of Olathoe their home the Atlantean Church was the most popular and affluent. Saturday services at their cathedral were always filled to capacity with people hungry to achieve spiritual enlightenment through prayer, good works and the ritual drowning of their first born children.

The Atlantean Church's main rival for power and influence was the Sons and Daughters of Mu. They laid claim to three temples within the city. While their numbers were less than half that of their rivals they were much more noticeable due to their distinctive dress, constant proselytizing and occasional firebombings.

Despite this, the twelve storefront chapels of the Church of the Later Day Lemurians saw more day to day traffic than either of them. Of course the majority of those daily visitors came for the free sushi but enough stayed to hear a sermon or two to make the whole exercise worthwhile.

Judy Bauer was only there for the sushi but she sat in one of the pews and half-listened to the droning as she ate. She was nineteen years old with long yellow hair and a dress sense that bordered on the licentious. She ate quickly thinking to herself that there was just something about a good orgasm that always made her hungry for raw fish.

She smiled at the memory of shivering in Isaac’s arms, he might have taken a vow of silence but he had been making all kinds of noise just a little while ago.

“Adoration is just another resource my little princess,” Mother had said, “and one that rarely runs out.”

When the sushi was gone Judy set the paper plate down beside her and leaned back in the pew. She scanned her surroundings for a clock and then chided herself. What self respecting church would have a visible timepiece? That was asking for trouble, and diminished tithes. Judy crossed her arms and contemplated the stained glass windows. They were all standard Lemurian iconography, gilled and gilded saints, sunken cities and cephalopods.

“Octopus’s garden,” she said to herself, smirking at the reference.

Judy wondered if Isaac had woken up yet. She usually wouldn't let him doze off at all, preferring to get him dressed and out the door before one of her roommates came home but that wasn’t something she had to worry about tonight. Lorelei was off on one of her calamities in the making and Audra was out someplace, probably feeling sorry for herself.

If Judy had wanted to she could have waited for Isaac to wake up and have another go, instead she had come here. To a dingy little temple near the intersection of Ballindine Street and Route d'abbaye.

All around her ordinary folk were chewing and praying sloppily. Judy felt the pull of her dorm room and her bed. Even if Isaac wasn’t there his scent would still be lingering on the pillow.

“Careful princess,” Mother’s voice reared up from her subconscious, “don’t get too attached to your pets...”

And with that Judy got to her feet and headed for the door. Along the way a well dressed woman with a pierced ethmoid bone stopped her. She was full of invitations and promises. Judy took pleasure in laughing in the woman’s face.

That done she started walking back to the campus deciding to head a mile and half down Route d'abbaye then across to Kissos Lane. There were quicker ways to go but for some reason she couldn’t bear to even consider them.

The night sky was cloudless and crowded with stars, the Spire was a tall shadow rising up from the heart of the city and the waning moon was just starting to peer out from behind it. With each step Judy second guessed herself a little more. What had possessed her to come out here? There were almost a half-dozen restaurants and markets near the Hammond Academy’s campus.

So why? For free sushi? What did she need with free sushi? She was rich. She could have had it delivered to her room by a trio of dominatrixes riding ponies if she wanted.

Something’s wrong. She realized, This is magic. Subtle magic.

The hair on the back of her neck prickled. Was there someone following her, shadowing her every footstep? Judy forced herself not to turn around. If she turned around and made eye contact the chase would begin.

Better to do what she did best, play the dumb blonde while slipping the straight razor from her pocket.

Things like this were the reason her mother had married into the Lunt family. Who better to protect you from a merciless world than a clan of merciless, and wealthy, relatives? But it hadn’t worked out that way. All that had ended up happening was that she and her daughter found themselves having to fend off a better class of assassins.

Judy tried to bolt across the road and lose herself in the brownstones of Nooker Street but she couldn’t do it. It was like an invisible rope had taken hold of her and she couldn’t step off the sidewalk.

This is magic. Subtle magic.

Before she could do anything else a hand landed on her shoulder, turning her roughly around. Judy pulled the straight razor from her pocket and flicked it open with practiced ease. In her mind’s eye she had already opened her attacker’s throat.

Judy saw his face and gasped with recognition.

The straight razor fell from her hand.

Email ThisBlogThis!Share to TwitterShare to FacebookShare to Pinterest
Labels: Route d'abbaye, THE NICK OF TIME and other abrasions, weird tales

(I must be in a musical frame of mind today...)

Email ThisBlogThis!Share to TwitterShare to FacebookShare to Pinterest
Labels: musical interlude, sgt howie should have gone for it, sing it

I think we need a little Tom Waits - SING IT!

Email ThisBlogThis!Share to TwitterShare to FacebookShare to Pinterest
Labels: music, sing it

This always cracks me up.

No one thought the misprinted cards would sell but it turned out that a lot of people wanted to tell someone to “Pee my Valentine.”
at February 14, 2012 No comments:

Amazing Ed tried to help an old lady on the corner across the street, he ended up being arrested for patronizing geriatric hookers.

He prayed before every kickoff and gave praise after each touchdown. Finally, during the super bowl, Chtulhu showed up.

It was bad enough when the neighbor's dog started humping his leg. But when your neighbor started doing it all bets were off.

Beulah loved three monsters, the vampire for his sensuality, the werewolf for his rockin' body and the mummy for his dry humor.

The technology was available to send fresh fecal matter through the internet but nobody was in the market for steaming content.