Dedicated to Chris ‘Fifthrate’ Scheetz
It was a major coup to have ThrillCon 2011 at the River City Arena. Some saw it as a sign that at long last the city’s fortunes were changing, others said it was the natural result of the Megalopolis City Convention Center being crushed by a giant robot. In the end the reasons didn’t matter, what mattered was the influx of tourists, what mattered was the prestige of having celebrities and film studios promoting their summer blockbusters in a town that had been written off by so many.
By late Saturday afternoon the River City Arena was swollen to capacity. Dealers’ tables crowded together at one side of the lower level; comics, movies, magazines and collectables traded hands. Towards the middle of the arena the comic book companies and movie studios were giving away swag and trying to generate positive Internet word of mouth. Every half hour there was another promotional trailer or press conference.
The upper level of the arena was reserved for the famous, the semi-famous and the nearly forgotten. Almost all of them had a number of admirers lined up for autographs, pictures and the occasional unnerving question.
No one had more admirers lined up to meet her than Tanya Watson. She was the perky blonde starlet of the moment thanks to her lead role in the action/adventure TV series Jailbait. The producers of the series had decided to combat the softening second season’s ratings by sending her out to meet her fan base and press the flesh. Tanya was more than happy to do this, so long as there was plenty of security and hand sanitizer nearby.
The only table without a single visitor was Amazing Ed’s and he was mortified by this turn of events. He was an actual super hero, he didn’t just play one on TV, but no one was interested, no one even knew who he was. Sighing with boredom Amazing Ed drummed his fingers on the 8x10 glossies he’d had printed up and thought mournfully of the hours he’d wasted practicing his signature.

Suddenly there was a commotion near the front entrance, then a flash of light and a sound like a crash of thunder. Movie props and convention staff went flying in all directions. More attendees rushed to save the former than the latter. “BEHOLD!” a voice cried out, “THIS IS THE AWESOME POWER OF FANBOY X!”
Amazing Ed got to his feet, he didn't know who the Hell Fanboy X was or what he wanted but whenever someone started talking in all caps it was a sure sign trouble was brewing.
A tall heavyset man waded purposely through the panicking crowd. The gleaming metallic gauntlets and boots he wore clashed with his Star Trek uniform, just as his thinning hairline and beady eyes clashed with his overlarge ears.
“YOU!” Fanboy X pointed towards the autograph tables.
A terrified voice said, “Me?”
“NO! NOT YOU BURT WARD! I MEAN YOU TANYA WATSON!”
The yellow haired starlet leaned over to her publicist and asked, “Is he that Kevin Smith guy?”
“I AM FANBOY X AND I HAVE DECREED THAT ONLY YOU TANYA WATSON ARE WORTHY TO RECEIVE MY SEED AND BIRTH ME AN HEIR!”
“What is he talking about?” Tanya asked. She turned pale as her publicist discreetly whispered an explanation to her, “Ewwwwwww!”
The strange intruder raised his right arm and fired a bolt of energy from the silver gauntlet. Tanya Watson’s publicist, personal assistant, two bodyguards and small yappy dog were all thrown backwards. Fanboy X activated his rocket boots and took flight, sweeping up the bewildered starlet in his arms.
“Help!” Tanya cried, “This nerd is touching me!”
Amazing Ed chose that moment to make his move. He fired his grapple gun catching Fanboy X around the waist. “Put the girl down!” he ordered.
“WHO DARES?”
“I dare!” Amazing Ed pulled on the cable, tightening it, trying to drag the would-be kidnapper back down to the floor.
“FOOL!” Fanboy X flicked his wrist and a trio of Wolverine-esque claws that glowed like light sabers popped out of the back of his left gauntlet. He slashed the restraining cable easily, “YOU THINK YOU CAN STOP ME? I AM A MASTER OF SCIENCE AND MAGIC! I AM THE RULER OF THE NATION OF VULNAVIA! I HAVE OVER 2,000 FACE BOOK FRIENDS!”

Fanboy X paused to laugh maniacally at that last part, Tanya struggled in his grip and convention goers watched helplessly. Amazing Ed stared wistfully at the ruins of his grapple gun. This one hadn’t even been paid for yet.
“COME MY BRIDE” he said as he began to rise up towards the River City Arena’s skylight, “SOON YOU WILL KNOW ALL THE GOREAN SLAVE POSITIONS!”
Amazing Ed ran cross the autograph tables and leapt. He caught hold of a banner promoting a new Fox Sci-Fi series that had already been canceled and swung upwards. Amazing Ed tackled the villain and tackling him in mid air. The impact robbed Fanboy X of his equilibrium and control of his rocket boots. The right boot went left and the left boot went right twisting and breaking his legs. In his agony he dropped the starlet. Then Fanboy X and Amazing Ed crashed into the wall and slid down to the floor. Fanboy X was whimpering, his legs bent like soft pretzels. Amazing Ed was too dazed to do anything but watch helplessly as Tanya Watson plummeted towards the floor...
Only to land right in the arms of the quick thinking man dressed as Egon from Ghostbusters. “Are you OK?” he asked.
At first she was too terrified to speak, then she said, “Get me the Hell out of here and I’ll get you your own production company.”
He did as she asked, and the results were SyFi Channel history.
at February 17, 2011 3 comments:

The Glenn Beck Conspiracy Generator is almost as crazy as he is!

Hey looks like I'm getting some visitors from the HEROGAMES forums!

Nice to meet you all. Be sure to check out THE LOCAL HEROES stories for a taste of my kind of super heroes!
at February 16, 2011 No comments:

Neil Lansing, 33, was charged with drug possession and smuggling contraband in jail for having 30 items tucked up his anus, the Sarasota Herald Tribune reported.

Using a rectum as a smuggling compartment is nothing new in Florida, but this has to set some kind of world record or at least a state jail system mark.

On top of 17 blue pills and a cigarette, Lansing was able to fit six matches, a flint, a syringe, some lip balm, an unused condom and a receipt from CVS....

This just in- OH SNAP!

Thanks to FARK for this link

HEY! LOOK BEHIND YOU! Introduces us to SUPER HARMONY...

Thanks to HEY LOOK BEHIND YOU!

Upon becoming corporate trainer her first goal was to make sure no one ever got trained well enough to replace her.

18 Valentine's Days and in a row no less.

I spend a lot of time on this blog waxing poetical about all the girls that might have been or complaining about the indignities of being settled down and married but here's the thing I don't nearly say enough.
I love you Vanessa Bruno.
You stayed with me when others would have kicked me to the curb.
You believed in me even when I didn't.
For God's sakes you didn't even complain when I took time out from our Honeymoon night to watch the newest episode of Mystery Science Theater 3000!
I love to take the setbacks and sadnesses of our almost twenty years together and fashion them into parables and punchlines but the thing I want all of you readers out there to know is that this woman-this sexy, smart and amazingly patient woman is the reason my life has been sweeter than I could ever have imagined. 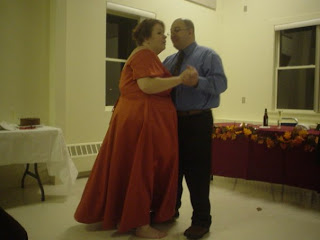