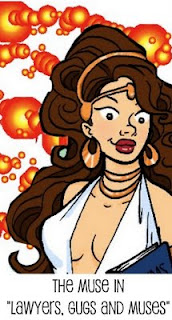 Lawyers, Gugs And Muses
by
Al Bruno III
The Muse is standing in the doorway. For a moment I am not sure what is more striking, her ethereal beauty or the trusting way in which she has allowed me to enter her home. Usually super heroes have high level security protocols. They require reporters be blindfolded, or extensively vetted. Many insist upon pre-agreed upon questions and, in the case of Stoneville’s defender Frogman, a full body cavity search.

Her apartment is a sparsely furnished two room affair. As she serves me coffee she explains that it exists primarily on the Astral Plane.

There are no chairs or couches, just soft, oversized cushions. She motions for me to sit down...

*
The Muse streaked across the skies of River City, her long brown hair fluttered out behind her, her jewelry gleamed with mystic force, and while it was true that she was one of the Nine Muses, her diaphanous gown left little to the imagination.
Leaving the River City limits behind her she zeroed in on Altar Hill and prayed she wasn’t too late.
*

It is a well publicized fact that you are bankrolling your team 'the Local Heroes' with profits from your line of romance novels. You're paying for everything.

The Muse: “I like to think the entire team contributes in one way or another.”

But aren’t you the one bearing the brunt of the team’s legal woes?
The Muse: “Legal woes? I stand by our record. Street crime is down 700%.”

True, but you must admit there are problems. Many prominent citizens have issued restraining orders against you and your teammates. Even now a citizens’ action group is trying to force you to leave River City. They cite reports showing that simply having a super hero team within the area increases the likelihood of a giant robot attack by 700%.

The Muse: “Our legal team has addressed each of these issues and it is a well known fact that the study that produced the ‘Giant Robot Bell Curve’ was highly flawed...”

Altar Hill was a craggy mound of Earth a few miles outside of River City. It was a swath of land that had suffered curse upon curse, where primordial standing stones had been toppled to make way for Indian Burial mounds that had then been desecrated by the twice-weekly witch burnings of 1693. Altar Hill was a damned place where nothing could survive, not even a Wal Mart.
The Muse saw the missing school bus parked there, just as she had expected. A trio of giant, four armed monsters called gugs guarded it, making sure that none of the imprisoned teens dared escape.
A lanky figure stood atop the bus. He was dressed all in black and wore a stovepipe hat. One of his hands clasped the handle of a worn carpet bag, the other was raised in a gesture of summoning...
*
The Muse: “And besides that, the state appellate court is due to hear our appeal in a few months and I have no doubt that the Sewer Ghouls’ charges of racial profiling will be dismissed.”

There are also questions about the ‘Altar Hill’ Incident?
The Muse: “I had to act quickly. The Carpetbagger had kidnapped an entire busload of River City High School students as virgin sacrifices.”

He can’t have been sure-

The Muse: He had the entire pep squad. Including the mascot.

“Hear my call!” the Carpetbagger shouted, “I summon you Shogroth the Incontinent! Fertilize the world with your vengeance!”
Still hurtling through the air the Muse sang a counter-spell. Each note crystalized in the air like a flash of neon.
“Fool!” The scrawny man in black flipped open his trusty carpet bag, another gug leapt out, “Die!”
The gug knocked the Muse from the sky with a single swing of its misshapen arm. Driving her into the ground with a force that would have killed an ordinary mortal.
“Stop this!” the Muse fought to catch her breath. The gug scooped her up in one of its hands. When it roared at her it’s mouth split open sideways revealing rows of shark-like teeth.
“You’re too late hero. Nothing in the world can stop me now!”
The busload of students screamed for help as the sky darkened and the air grew thick with the odor of eldrich flatulence.
*
The Muse: “Those lawsuits are frivolous and are the fault of outside agitators with connections to the super villain community.”

It certainly wasn’t a power anyone expected you to display.

The Muse: “It would have been to anyone familiar with comparative mythology.”

The Muse stood and glared across Altar Hill. For a moment she locked eyes with the Carpetbagger and knew that she had no choice but to call upon forces she could barely control.
A glow began to emanate from her hands, an amber fire that grew more and more solid with every second. Pinpricks of darkness began to swirl within the illumination. A faint droning sound began to fill the air. The Muse raised her hands and sent a cloud of black and yellow radiating outwards in all directions.
The students, the gugs and the Carpetbagger all began to scream at once as the swarm of insects reached them.
*
Bees?

The Muse: “They are known as the Birds Of The Muses. They're magic bees.”

You sent a swarm of bees into the middle of them?
The Muse: “It stopped the ceremony.”

Where did they come from?

Some of the students were stung. They reported allergic reactions.

The Muse: “I said they were magic bees. You can’t have a reaction to magic bee stings.”

You have to admit that answer seems less than inspired.

Thanks to TOPLESS ROBOT for this

(Check This Out!) Ross Payton's ZOMBIES OF THE WORLD

Ross Payton is the man behind ROLE PLAYING PUBLIC RADIO. His latest project is ZOMBIES OF THE WORLD an in depth examination of the hungry dead.

Zombies menace humanity, yet we barely understand them.

There are books that show you how to kill the undead but this is the first study to explain the importance of zombies to us. Zombies of the World reveals the undead to be a valuable part of our ecosystem and the key to new discoveries in medicine and technology.No other book covers these topics.

Zombies of the World brilliantly documents that evolution has led to a wide variety of species.

Few outside the scientific community even realize that creatures like the Egyptian Mummy (Mortifera mumia aegyptus) are actually zombies. Some species are even harmless to humans. The Dancing Zombie (Mortifera immortalis choreographicus) only seeks to thrill humans with elaborate dance routines. Destroying the undead isn’t always the answer.

Even if we could annihilate all zombies, we would lose knowledge potentially vital to our own survival.

After decades of research, we have no idea why zombies never tire or stop. They possess an endless source of energy to shamble or (in some cases) sprint after us. Unlocking this mystery could benefit all humanity. Only Zombies of the World tackles this issue and many other paradoxes.

He is taking pre-orders now!

Once again Mighty Woman was attacked by the Exploding Man. He was her mortar enemy.

Love means never having to say “No YOU sleep in the wet spot.”

To save money while she looked for a job Lori only used paper products made from hemp. She had the most popular resumes ever.

5 Second Fiction One Thousand Nine Hundred and Thirty One

Captain Hero exercised daily because the only thing less forgiving than his war on crime was the tensile stregnth of his spandex.

A rival farmer jabbed old MacDonald's mother with a pitchfork. Once arrested he was charged with crop staking and mother forking.