Look, I don't know how your day is going but I could use a song by Kate Bush right now.

Be sure to stop by YOG-BLOGSOTH for more!

ZOMBIES ARE MAGIC reminds us that TITUS kicks ass in iambic pentameter.

Sometimes you get an itch you just need to scratch and this week my itch was Julie Taymor's version of Will Shakespeare's Titus Andronicus. Titus is a full fledged horror film. In Shake's day it was called a "tragedy" but trust me, this is full on Goth horror. I saw this when it was released, well before we all knew Julie Taymor as the person who was fired from Spiderman: Turn of the Dark. I remember being deeply disturbed by it and thinking that Shakespeare was one fucked up individual. Seeing it again I am more convinced than ever that this is true...

...just doing a little experimenting with the layouts.
at July 15, 2011 No comments:

Today the Internet was a smorgasbord of boner fuel.

First we have Hellen Mirren...

Then we have Alison Brie and Gillian Jacobs

Truly we live in the best of times

Email ThisBlogThis!Share to TwitterShare to FacebookShare to Pinterest
Labels: boobies, something pervy

Everything Must Go (a true story)

Everything Must Go
(a true story)
by
Al Bruno 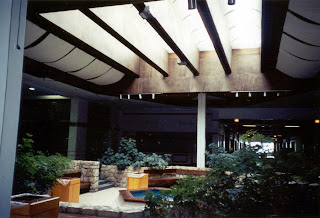 It was not a physical decay that had rotted Mohawk Mall away from the inside but an economic one. The stores had bled away bit by bit. Some had been small businesses that never stood a chance, like the store that sold nothing but products made in Switzerland. Others had been casualties to changing tastes and fashions.

Losses like that could be dealt with but when the mall's McDonalds closed down it was the beginning of the end. I was there for a liquidation sale for a big box electronics store that had been placed there in hopes of reviving customer traffic. The plan had failed and now this store was the only business left. Everything else was just empty windows and boarded up doorways. I wasn't there to buy anything but I was going to bring something away with me none the less. 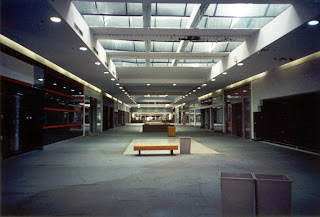 Bargain hunters like me entered the mostly-defunct electronics store through the front door but there was another door to be found. It was at the back, near the nearly empty video department. All that was left there now was a handful of Playboy features and a cheaply produced Disney direct to video movies. I doubt if anyone would have the nerve to bring either type of video cassette to the sour-looking woman at the register. That second door was kept open to cool down the store, better that than pay for air conditioning.

It was easy enough for me to slip through that doors and wander into The mall's darkened interior. I could see the empty spaces that had been a Woolworth's, a restaurant and a Spencer's gifts. When I was a teenager I had frittered so many hours and dollars away in this place. 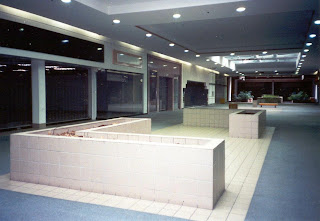 The mall's fountain had dried up long ago, the water turned off, the pennies and nickels snatched away. There was dirt and dust everywhere as well as scraps of old paper and rat droppings some dried and some fresh. The newspapers said that as soon as the electronics store was emptied this mall would be knocked down and a much more eye-pleasing shopping plaza would rise up from the ruins. There were even hushed and reverent whispers that a Target or Wal Mart would be there.

I wondered when that would be. I was thirty six and so many of my life's landmarks had disappeared or changed into something unrecognizable. I wondered how much longer it would be before the wrecking ball came for this place. I didn't know but I knew this would be my last chance to get what I had left behind. 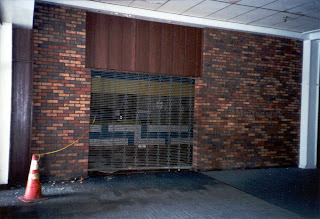 Despite the shadows and the grime I found the spot easily. It was just an ordinary bench, I remember it faced a women's clothing store. The bench was chipped and lopsided. It creaked threateningly as I sat down. When I closed my eyes I could remember the girl that had been sitting beside me. The strawberry blonde, my first love. 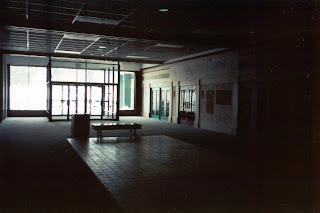 The sounds came first, the murmur of voices, the empty din of the piped-in music. I saw myself at sixteen years old, so awkward and forever feeling like I would never measure up to the world's expectations of me.

I could tell you that my first love was as cute as a button but that would be a lie because there wasn't a button made that could have held a candle to her. I remembered the white winter jacket she wore and the scent of her perfume. It was soft, gentle and unique like her and I never smelled its like again. That day we had been sitting side by side, joking and talking. That first kiss, my first kiss, happened so fast and after that nothing was ever the same again. 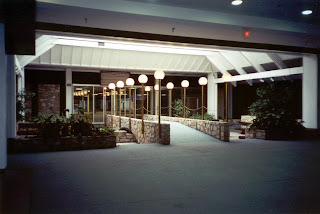 Did we look ridiculous sitting there making out in full view of the world? Probably and I suppose more than a few people didn't approve but no one tried to separate or shame us.

Which is good because you couldn't have pried her from my embrace with a crowbar. I didn't want those kisses to end, I wanted them to go on forever. 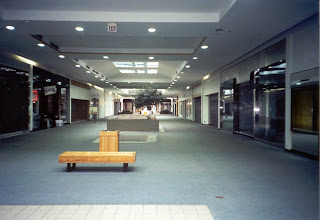 Impossible I know, but when you're sixteen time moves so slowly that forever seems easy.

But there was no forever, there was just that moment and that moment had ended as surely as Mohawk Mall had become a faux-deco tomb. I opened my eyes and I was thirty six- definitely older but only maybe a little wiser. I have a wife, daughter and an appalling number of pets waiting for me back home and for all my mooning over the past and smartass remarks I couldn't wait to see them.

I savored that memory and brought it with me, hiding it away in my mind and my heart. I was sure no one would mine one less ghost haunting a place like this.
at July 14, 2011 5 comments:

The Good, The Bad And The Zoog!

Robber who broke into hair salon is beaten by its black-belt owner and kept as a sex slave for three days... fed only Viagra...

The would-be robber was eventually released, with Zajak saying he had learned his lesson.

Jasinski went straight to the police and told them of his back-room ordeal, saying that he had been held hostage, handcuffed naked to a radiator, and fed nothing but Viagra.

Both have now been arrested.

When police arrived to question Zahjac, she said: 'What a bastard. Yes, we had sex a couple of times. But I bought him new jeans, gave him food and even gave him 1,000 roubles when he left."...

Michael Bukowski has a Fungus Among us!

Be sure stop by YOG-BLOGSOTH and tell the illustrator what you think.

Johnny Depp and Disney to remake THE NIGHT STALKER?

EXCLUSIVE: Disney and Johnny Depp's Infinitum Nihil are teaming up on two new projects: a feature version of the '70s TV movie The Night Stalker, and a drama about the Midnight Ride made by Paul Revere to warn Colonial militia of the impending British invasion. Depp is the potential star of both films, and he and his Infinitum Nihil partner Christi Dembrowski will produce.

Like many, Dembrowski and Depp had fond memories of the ABC telepic and series The Night Stalker, and they got Disney's Rich Ross and Sean Bailey sparked on a pitch for Depp to potentially play tabloid reporter Carl Kolchak. Originated by Darren McGavin, Kolchak was the dogged journalist first seen in the 1972 telepic (where he hunted a killer who was draining the blood of beautiful girls on the Las Vegas strip) and later in the ABC series Kolchak: The Night Stalker. Kolchak's investigations always seemed to lead him to the doorstep of vampires, zombies, werewolves and aliens. For its time, it was pretty scary stuff. The studio will go out to writers shortly. David Kennedy will be exec producer...

Disney and Depp remaking THE NIGHT STALKER seems like a good fit. I saw the original television movie when I was 5 years old and let me tell you Carl Kolchak was one of my childhood heroes, way before I became a frothing at the mouth Whovian. I loved every episode of the series, now matter how cheesy, I loved the humor and the scares. In fact I still do.

1.) Carl Kolchak is not a badass. He is clever, tenacious and has the kind of bravery of a man with his back against the wall. He's a clumsier Fox Mulder or a more exasperating Frank Black. He gets the job done but nearly pees his pants every second of the way. Carl Kolchak is just like us.

2.) Any NIGHT STALKER film should have witty dialogue. Carl Kolchak should be funny, the kind of verbal slapstick you found in the dialogue of the original GHOSTBUSTERS film. Kolchak gets in arguments with everyone because he knows he's right, those arguments should be hysterical.

Then again I am a forty year old unpublished writer, what the Hell do I know?

Stop by SWINGSHIFT STUDIOS to see the full sized version of the strip and don't forget to check out MY SUPA LIFE!

(Insane News) Man accidentally shoots himself while firing point blank at a target.

This moment of OUCHIE! brought to you by GAWKER

THE TROLL HUNTER was a delight!

I have heard this referred to a horror film but I don't really think it is that. It really is more of a dark fairy tale. The kind of story Neil Gaiman might write in between bouts of making sweet sweet love to Amanda Palmer. (Lucky bastard!)

Anyway, this movie is a lot of fun, it is done in the style of CLOVERFIELD but this was just so much weirder that it appealed to me more.

Check it out if you can.