We came here often as children, to spend lazy summer days under the filtered shade of the trees. Sometimes we’d bring a pole, though we rarely caught anything...

The rambling and broken exclamations continued onto the covers (and, well, frankly … into the scripts as well, but that’s a whole other picture). Not only were the covers themselves freaked-out psychotic episodes full of colorful logos in full-on grinding lesbian embrace and wraparound Where’s Waldo diorama in which “The point of focus” was the little fella in the stripey shirt and glasses, just about every comic had some character or another shouting – invariably in bold type – some puzzling inanity or babbling cacophany...

Click here to read the rest of the article at GONE & FORGOTTEN (one of my favorite websites folks, you should check it out) 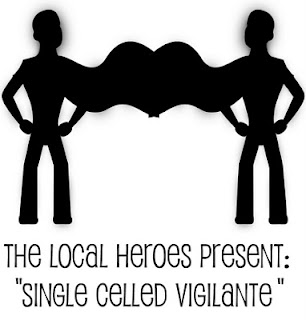 Single Celled Vigilante
by
Al Bruno III
the original version of this tale appeared at shortfastanddeadly.com
The spring of 1940 marked the beginning of the Golden Age of heroes. Masked marvels had begun to sprout up in everywhere, some had powers far beyond those of mortal men, others were just foolhardy adventurers but all of them were eager to change the world.
In the spring of 1940 River City was no different.
A figure dressed in shades of black and gray stalked along the rooftops near the River City Museum. It drew a dark cape up over a mask-like hood and watched a suspicious-looking truck pull up in front of the building. A gang of thugs piled out. Leading them was the infamous Vinnie the Claw leader of the Shellfish gang.
It was time to act, there was a new hero in town.
*
At the end of Vinnie the Claw’s right arm was a lobster-esque pincer that was three times the size of a normal man’s hand. He brought it down on the case full of Egyptian treasures shattering the glass. He then ordered his men to get the loot.
Vinnie’s pincer clicked in anticipation. The Museum’s alarms were ringing but there was no way the cops would get there in time. This would be the heist that put the Shellfish gang on the map, this is when he graduated from being a two bit mobster into a full-fledged crime lord. Vinnie grinned at the thought of what that meant- money, power and expensive personalized stationary.
Once he was sure his men had grabbed everything of value Vinnie said, “Come on. Let’s get out of here.”
A masked man appeared in the doorway of the Egyptian antiquities exhibit. He was tall and dressed in shades of gray, the hood-like mask he wore couldn’t disguise his mischievous grin, “Does someone miss their mummy?”
Vinnie didn’t know who the caped figure was, and he didn’t much care, self-appointed crime-fighters were a dime a dozen these days. Whoever the guy was, he’d just made a big mistake. With a gesture of his claw Vinnie ordered his men to stomp the guy unto the ground.
The thugs charged. Instead of running the masked man threw himself into their midst. A punch to the jaw sent one falling to the floor, an uppercut sent another stumbling backwards.
One of the Shellfish Gang grabbed a spear off of a display and jabbed at the man in gray, forcing him back.
“Better be careful,” the crime-fighter quipped, “someone’s going to get hurt.”
The thug snarled and jabbed forward again only to have the spear grabbed from his hands. Then the masked man used the blunt end to club the thug into unconsciousness.
“See?”
Two more thugs left. One came up behind the hero and got him in a headlock. The other began hitting the man in gray in the gut again and again.
“It tickles!” he joked before sending one thug flying with a kick to the face. Then he flipped the other thug over his head and tossed him into the wall.
The masked man looked around the room with a smug grin...
...until he realized that the ringleader of the Shellfish gang was gone.
*
The bags of loot were heavy but the car wasn’t all that far away. Vinnie waddled and heaved, he was sure his boys would be able to handle that guy but he wasn’t going to wait around to be sure.
“You’re trespassing.” the voice was a thick rumble.
Vinnie stopped dead in his tracks. There was a figure dressed all in black perched atop the getaway truck, the cape and hood-like mask he wore were a match for what the other guy had been wearing.
“You’re trespassing...” the hero in black leapt from atop the truck, “Because I own the night!”
The bags of loot dropped to the ground as all of Vinnie’s thoughts turned to self-preservation. He snapped blindly at the air in front of him with his pincer-hand.
Snap!
Snap!
Crunch!
Vinnie opened his eyes to see that he had caught a black-gloved hand in his pincer. He squeezed.
There was only rage in the hero’s voice as, “You think this hurts? You don’t know the meaning of the word ‘pain’.”
Suddenly grabbed someone Vinnie by the shoulder and swung him around. It was that other guy!
“Someone has a crush on you,” he joked.
Vinnie tried to block the gray-gloved fist that came rocketing towards his face but he was knocked to the ground, his eyes watering, his grip on the other hero lost. He reached for his gun only to have it kicked out of his hand.
*
“Who are you guys?” Vinnie demanded as they tied him to a nearby lamp post.
“I’m Amoeba-Man.” The crime-fighter in black hissed.
“And so am I.” The man in gray chuckled.
“You’re crazy!” Vinnie shouted, “You’re both crazy!”
“Oh yeah?” the man in black hissed.
“Watch this!” the gray suited vigilante said.
If Vinnie the Claw hadn’t seen it himself he would never have believed it. The two Amoeba-Men stepped together and merged. They became a single man, taller, more muscular and dressed in a costume that was both black and gray.
Vinnie slumped against the lamp post, “How did you do that?”
“I told you,” the masked man said, “I’m Amoeba-Man, and if there’s one thing I know how to do it’s divide and conquer.”
at March 25, 2011 2 comments:

Indeed, there was a naked man walking down the street.

A concerned woman tried to cover the man's parts with a towel, but the towel didn't stay.

Asked by officers why he was walking around nude, the man retorted, asking why they were wearing clothes...

They tried to create a stage play about colonoscopies but there were problems with blocking.

She was the rare kind of woman that could only be turned on by books of an academic nature. It was a kind of texual arousal.