I don't think much of the stuff they pass off as music these days...

Is it too late to talk about my favorite blogposts for the week????

Jeez I hope not!

Darcknyt made us wonder if pb&j and audiobooks were safe to use in tandem.

Gone and Forgotten reminded me that even my beloved JLA/JSA crossovers could be lame.

MonsterCrazy showed off the original cover for Låt Den Rätte Komma In (Let the Right One In)
Final Girl sported a gallery of Phamtasm movie posters.

Francis Hogan's My Supa Life went there. Oh yes. It did.

Plaid Stallions reminded me that once, a long time ago, the GI JOE teak fought alien cavemen.

The 10 Doctors continues to be better written and more involving than some moments from the actual Doctor Who comic.

I learned from The Drunken Severed Head that Shane Briant, an actor that appeared in some of Hammer Films latter day output, is now a writer living in Australia. Neat.

That's it for this week!

May I present the greatest moment in the history of televison...

It's such a brutal planet It's such an ugly world

That story was kind of harsh huh?


I've had this story in mind for a while but since it was inspired by the actual terrible things that happened in Sierra Leone I decided to wait a while before I touched on the events. Plus I had to work up my courage, monsters are easy for my, human cruelty is hard for me write about.

Well I hope you liked what you read. For those of you looking for funny stuff I promise it will be here soon. I tend to go from horror to humor and back again.

Of course Keep Circulating The Blog!


And for gosh sakes get some folks from North Dakota and Montana to visit so I can complete my collection!
at May 15, 2009 No comments:

Email ThisBlogThis!Share to TwitterShare to FacebookShare to Pinterest
Labels: Al Bruno III has no dignity, using my blog to talk about my blog

Because breakfast is the most important meal of the day

Police in Needham pulled over a man who was allegedly driving while trying to eat a bowl of cereal - with milk, according to Wicked Local Needham.

The 48-year-old driver, who is from Needham, was apparently spotted driving erratically by other drivers...

Well book one is starting to pick up speed... in a lazy sort of way I suppose.


I hope you all are enjoying it.

Hey did you notice we have had over 4,000 hits? Not too shabby all things considered.

At first I wasn't sure I liked it, I started reading it thinking we might have a bit of Lovecraftian horror mixed in with some childhood trauma but what I ended up getting was very different...

This is what Amazon.com has to say about the story- "Annie has terrible luck with pets. She's killed hamsters and mice and lizards and birds. For a domesticated animal, getting Annie as an owner is akin to a death sentence. But when Annie finds a little beastie in a drain pipe named Ojo, has her karma really changed or is she destined for more disappointment?"

Ojo was sweet and strange and it had a cameo appearance by a Mysterious Trout.

It's just odd but it's the best kind of odd really. I think I'll read it again soon.

But for now I am reading a collection of the original Vampirella stories. It was one of the comics my parents never allowed me to buy. I used to think it was because they weren't comfortably with me reading sexy horror stories at such a young age.

Now I wonder if it was because they were afraid I would start dressing like her... 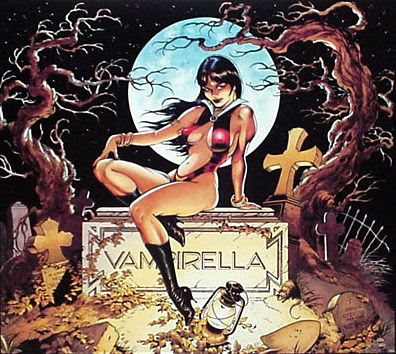 Man, Mondays have been beating the CRAP out of me lately!

I spent half the day at work in a daze and now here I am at home knowing I won't be able to sleep tonight.

Ah well, more time for writing I suppose, that serial novel isn't going to write itself!

did you hear there is talk about Shirley Jones posing for PLAYBOY at 75?