The Nick Of Time (and other abrasions): Breaking The Girl 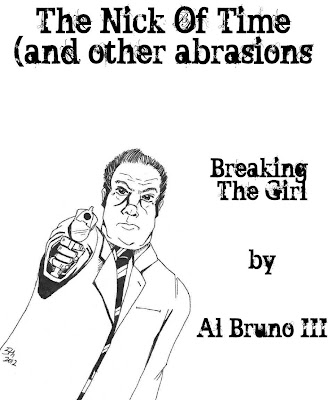 Breaking The Girl
by
Al Bruno III
She stirred groggily; her head was aching, she was tied to a chair, lengths of soggy rope bit into her wrists and ankles. And to think, just a few hours ago Jason Magwier had been chiding her with, “Come now my dear, what could possibly go wrong?”
Lorelei had been in worse situations than this. Hell her 16th birthday party had ended up looking like the last scene of Hamlet, so she just kept calm and didn't open her eyes or raise her head until she heard the click of boot heels on the stone floor. She looked up and spat an incantation-nothing too fancy, just something that would knock your average sized man off his feet.
Pain roared through her skull, the incantation became nothing but gibberish.
A familiar voice said, “Might wanna think about that again sugar-pie.”
Slowly opening her eyes Lorelei saw a hand mirror being held inches from her nose, arcane symbols had been painted on her forehead. She recognized them as Sigils of Enfeeblement and as long as they were there the most magical thing she was going to manage was a few card tricks.
Lorelei looked past the mirror to the grinning face behind it, to the red leather jacket, sunglasses and snakeskin boots. She knew this man all too well with his capped teeth, overdone hair and half-baked fashion sense. When she spoke his name her voice was full of contempt, “Jack Diamond.”
“Lorelei Miller.”
There was a table to his right, it had everything an uncreative torturer might need-things that were sharp, things that were blunt, things that gleamed and things that seemed to have been designed for no other reason that cruelty. Lorelei pulled halfheartedly at her bindings, “I suppose saying that you better let me go or you'll be sorry isn't going to gain much traction?”
“You always were a smart girl,” he made a show of drawing closer to her, looming over her, “now let's see if you're smart enough to know when to save that finely formed ass.”
“I'm not telling you anyth-AHHHHHHH!!”
Her every muscle locked, Jack Diamond pressed the taser into the flesh of her neck for what seemed like forever. When he finished he said, “You might want to reconsider that.”
Everything hurt, she felt faint and nauseous, “Do you really....do you really think we're going to give you back the Maker of Moons?”
“I know your boyfriend has it, I want to know where it is and what he’s up to.”
“He never tells me anything. Why don’t you ask him yourself?”
“Then where is he?” her tormentor scanned the bleak little room, “I don't see him here? Do you?”
“Torture and sarcasm?” she sneered, “However will I resist?”
Jack Diamond shook his head and dropped the taser onto his little workbench, “You really are something.”
The punch was so telegraphed that he could have sent it by Western Union, it gave Lorelei enough time to lower her face and catch the blow on the temple. While light flashed before her eyes, she shouted just to make sure he could hear her over the ringing in her head, “Untie me and I'll show you something.”
The next punch was to her stomach, the air whooshed out of her lungs. He said to her, “You know I was going to use my toys on you but I have to say this is very satisfying,” he punched her twice more in the head, “after all the times you and your compadres have screwed with me, this is very satisfying indeed.”
“...fucking...” she whispered, “...amateur...”
Another rain of blows, so many she lost count, they landed everywhere: on her head, face and chest. Lorelei tried to think of something else; schoolwork, her mother’s birthday, they lyrics from her favorite Patti Smith song.
When he was finished he left her with one eye swollen shut and a nose that dripped blood uncontrollably but that wasn’t the only place she was bleeding from, gashes had been cut into her cheek, her lower lip was split and blood was running from her forehead into her eyes. Lorelei welcomed the sting.
“Now...” Jack Diamond picked a pair of pliers from his workbench, “...where shall we start? The fingernails or the teeth?”
She shook her head fiercely spattering blood, making her face a red ruin, “Does it matter?”
“I suppose not,” he said, “you know, the thing about pain is that it shows us who we are. It helps us to get in touch with the animal part of us. Fight or flight. Some animals will chew off a leg to escape from a trap, others will just lay down and die. Let’s find out what kind of animal you are.”
She laughed a little, even her smile was bloody, “You believe that bullshit? You think you’re some kind of badass because you know how to hurt and kill? You’re just as asshole taking his traumatic potty training out on the rest of the world.”
“You just don’t know when to quit do you?” Jack Diamond grabbed for her.
She looked up and spat an incantation; nothing too fancy, just something that knock him off his feet. The second incantation melted the ropes that held her like butter.
“How the Hell?” Jack Diamond tried to stand but his leg had twisted under him and he went right back down again.
“You should have paid attention to where you were hitting me. Runes of Enfeeblement are only good if they don’t get smeared,” she tapped her bloody forehead, “I said you were a fucking amateur.”
He tried to draw the pistol from his shoulder holster but Lorelei was ready, she dug the taser into his skin and watched him twitch.
“I should be going,” she said, her finger squeezing the trigger, “but let’s just see what kind of animal you are. I think we’ve got the time.”
at June 24, 2010

Email ThisBlogThis!Share to TwitterShare to FacebookShare to Pinterest
Labels: Mythology In Progress, The Nick Of Time (and other abrasions)