The say the Acrobatic Flea killed a man in Gen Con just to watch him roll...

The Nick Of Time (and other abrasions): Smack My Witch Up

The Nick of Time
(and other abrasions) 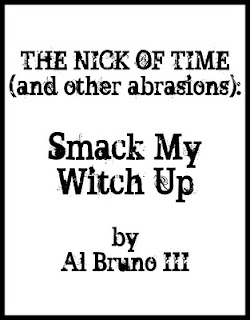 Smack My Witch Up
by
Al Bruno III

Judy Bauer ran out the door leaving bodies in her wake. Her jeans were torn up one side, there were unpleasant-looking stains on her blouse. Her long yellow hair had come undone and it swept out behind her.
How many was that? It had been dark and she wasn't sure. It had all happened too fast.
The streets of Salem, Massachusetts were deserted and dark, in the morning none of the ordinary citizens would remember anything more than their dreams. Even the people working nights were asleep at their posts, in a few hours they would awaken embarrassed but oblivious.
The February air was cold, it bit at her. The wisps of the dead thrashed mindlessly at her approach, the spirits of nature shuddered at her passing. A gray-hooded figure dove at Judy from out of an alleyway, slashing at her with a blade forged from silver and bone.
Judy reached out, drew a ghost from the realm of the dead and reshaped it with her will. What was once gentle and mindless became a screaming poltergeist. It tore into the gray-hooded figure, stinging and tearing but never leaving a scratch. The knife of silver and bone fell to the sidewalk as the gray-hooded figure stumbled back into the street. Judy snatched the blade up, then started running again.
Now how many?
There had been eight to start with, there might only be three now. That was an odd number and that might be enough to tip the balance against her.
Hunter-witches. The worst of the worst.
Footfalls behind her, bare feet and whipping robes. The rest of the hunter-witches. Judy glanced back and cursed. There were three of them.
Gallows Hill was her only chance, it was a park now but the ghosts and spirits there were thick as fleas on a fat pup. And wasn't it an appropriate place to go in the aftermath of a kangaroo court?
Witches had put other witches on trial tonight; it was the kind of irony that Judy's roommate insisted kept the Earth spinning. What had been billed as a convocation had turned out to be a prosecution.
The charge had been blasphemy. Blasphemy! Judy even hated the sound of the word. It was an accusation that the common horde always made against their betters. What was it her mother had said? “Blasphemy? Oh all the best people are doing it this year.”
Judy bounded off the sidewalk and ran across the deserted street.
One of the hunter-witches had nearly caught up to her. A quick incantation and his hand was burning. He grabbed at her. The odor of burnt hair goaded Judy to run faster. She could just see Gallows Hill Park resolving itself out of the darkness.
Unlike sorcerers and necromancers, witches drew upon already existing mystical resources. Modern witches strove to work in harmony with their environment, refusing to mark any part of the world, physical or otherwise, with their passing. That philosophy had never made much sense to Judy. Would the Sisterhood of the Magna Mater ask the permission of dead? Would the Brides of Cernunnos grovel before the spirits of the Moon? Should she stop walking out of fear of crushing insects?
No. Never. Judy Bauer might only be nineteen years old but she knew hippie bullshit when she heard it.
That was why she had tried to pass along what she had learned at the Academy to like-minded individuals, teaching them everything she could via coded letters and the occasional one on one meeting. This night of the Cara Cognatio was supposed to be the first meeting of her coven of strangers.
The hunter-witch with the burning hand was too close now. Judy did need him on her tail when she started to make her way up the incline to the place where Bridget Bishop and eighteen others met their end.
She spun on her heel grabbing at the hunter-witch’s wrist, twisting the grasping hand back at him. Judy cursed the fire spirit that had settled onto his hand, driving it to consume everything around it. The hunter-witch went up in flames as Judy dove for safety. Her adversary burned and twisted upon himself like a scrap of old parchment.
The remaining hunter-witches tried to save their dying comrade only to have the fire spirit lash out leaving one dead and the other with a face that had been burned away. Then the spirit turned upon itself devouring its very essence. Judy didn’t stay to watch.
*
There was a woman waiting for her at the top of Gallows Hill, the wise and proud Madeline Trevi. Her long white hair hung down around her shoulders, there was a fist-sized bruise on her jaw, it was dark and fresh. Judy could sense the ghosts of Gallows Hill clustered around her like a school of jellyfish.
When Madeline Trevi spoke her voice was waspish, “The Greater Eastern Council taught you well.”
“I would have shared what I learned,” Judy said.
“You would leave the world a husk.”
“The world is a husk already. You're just too stupid to realize.”
With that Madeline Trevi began to speak in the lost tongue. The words rooted Judy to the spot. She felt the air around her begin to bristle like the seconds before a bolt of lightning, the grass hissed at her feet as though it was full of snakes, the trees swayed without the slightest hint of a breeze.
The knife of bone and silver was still damp with blood, drops spattered everywhere as Judy threw it. The blade caught the old witch in the throat silencing her forever.
Madeline Trevi fell forward driving the knife point all the way through to the back of her neck. Judy kicked her and watched as another witch died on Gallows Hill and new ghost took its place among the rest.
All this. And on a school night no less!

Email ThisBlogThis!Share to TwitterShare to FacebookShare to Pinterest
Labels: friday flash, The Nick Of Time (and other abrasions)

ATTENTION FELLOW GEEKS! Would you rather watch Batman get beaten up or Wonder Woman belly dancing?

Now let me get this straight. They're remaking the remake of THE TEXAS CHAINSAW MASSACRE?

Lionsgate announced that it is teaming with Nu Image on The Texas Chainsaw Massacre 3D, a film that will be sold at Cannes. Takers helmer John Luessenhop will direct and Carl Mazzocone will produce...

Elasti-Nerd could stretch every part of his body, causing some people to dismiss him as a pretzel-neck geek.

5 Second Fiction One Thousand Nine Hundred and Fifty One

By now Jennifer had three kinds of jeans in her closet- loose, snug and 'Oh God I'm dying'.

Gary the horse's father went for a walk and never came back. Papa was a strolling roan.

It was standard proceedure for the reps at All Nude tech support to ask the callers to please bare with them.

But even Paul Naschy couldn't be all joy, all the time, and as I dig deeper into the voluminous depths of his surviving filmography, more and more I discover the counterpoint to that joyfulness, the "Dark Naschy" that lay just below the surface, sometimes overlapping (as in his wonderfully villainous turns in El Caminante and Horror Rises from the Tomb), and sometimes taking over entirely. Particularly in the late-70s/early-80s segment of his career, Naschy seems to have had some demons to exorcise, springing perhaps from his sense of insufficient respect for his work, or perhaps from a deeper, more personal space. The "dark" movies sometimes lose that sense of fun that drew me to his spectacularly muscled bosom in the first place, but nonetheless show a fascinating complexity in the man I've come to know and love so well... 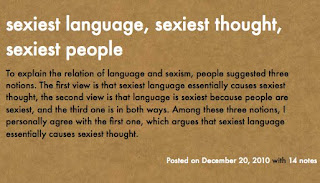 In the aftermath of FREE COMIC DAY at ACME COMICS

It was Saturday May 7, my first Free Comic Book day. Quite honestly it wasn't the kind of thing I ever say myself going to but my daughter found out about it and was really intrigued by it. And by intrigued I mean she became fixed on it with every ounce of her 11 year old being.

As you can she the girl is a force to be reckoned with.

So we made our way to ACME COMICS and got there by 10 AM.

ACME COMICS is the kind of place that makes me wish I had more disposable income- or I should say any disposable income. Even though we got there before they opened there was one Hell of line. So we got in line and we waited...

The thought of being in a long line filled with bored, bratty children and sweaty nerds frightened me especially since my daughter and I had hoped to be the only bratty and sweaty ones there.

But the good folks of ACME COMICS took that into account. They had kids from the local school selling soda and water. They had friendly folks passing out crayons and paper to the kids. And there were superheroes for photo ops!

(If anyone else asks I did not to ogle any of the spandex clad tushies on display...)

So anyway we got our comics and then I was ready to go but then my daughter saw that Kelly Yates was there.

Kelly Yates is one of the artists that work on IDW's DOCTOR WHO comics. My daughter is 11 years old and caught somewhere between properly nerdly fandom and the nightmare that is the DISNEY CHANNEL's tween-centric programing.

All she knew was that he was an artist that drew DOCTOR WHO COMICS and that she liked what she saw.

So it was off to line #2. The longer line of fanboys and girls waiting to get a sketch or an autograph from the guest artists. Sadly I had forgotten that bald headed men should not stand outdoors in the sun for long periods of time. Oh I'm paying for it now, my head looks the Red Hulk's testicle.

As she waited I got a chance to get a sketch from Ryan Dunlavey, an artist whose style I really enjoy. He asked what kind of a drawing I wanted and I asked him do try and sketch Lorelei from my THE NICK OF TIME (and other abrasions) stories.

His expression said it all, it said "This bloated, sunburned guy in a shirt that reads STUD MUFFIN is as crazy has he looks!"

But he took my suggestion and ran with it. This is what we ended up with- not bad eh?

Then my daughter asked Kelly Yates to draw her one of the Silence from the DOCTOR WHO episodes 'The Impossible Astronaut' and 'The Day Of The Moon'. Mr. Yates told her that he had never drawn one of the Silence before but he was more than willing to make a go of it. He got a reference picture via his iPad and set to work...

He made her day, it was all she talked about. Her message to him is as follows;

"Thank you very much. I hope you go to Hollywood someday. You are a very good artist. Your #1 fan Becca."

All this and we got some free comics too!

Thanks to Acme Comics,  Kelly Yates and Ryan Dunlavey for a great day.