I am now closer to the my death than I am to the sweet Thanksgiving night I lost my virginity!

But the point is- how did another year go by so damn fast?

Who knows? All I do know is that I've learned that aging is - much like jury duty and foreplay- is not something you can avoid.

However I do want to thank you folks out there for allowing me to share my stories with you. Time my be flying but you've been helping me to have fun while doing it.

The Nick Of Time (and other abrasions): Angel Hair And Baby’s Breath 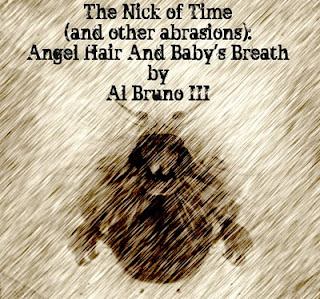 “What are we doing here?” Lorelei asked as she crawled through the second story window. She was nineteen years old. Her hair was dyed fuchsia and she wore mostly black.
“We’re- WUFF- We’re- WUFF-” Jason Magwier leapt up, his fingers just catching on the windowsill then slipping away, “-WUFF-I mean to say...”
The next time he jumped Lorelei grabbed his wrists and pulled him inside, “Talk.”
“I just need some angel hair,” Magwier fell on the hardwood floor. Even though he smiled his eyes were sad. His close-cropped hair was dark. He wore jeans, a battered leather jacket and a t-shirt for the long lost rock band White Brains On Toast.
The house they were in had been recently abandoned, Magwier had a thing for abandoned houses. Lorelei didn’t; when you lived in a world of secrets and magic life was cheap and real estate was at a premium.
Magwier put a finger to his lips and made a shushing sound. Lorelei pulled a long-empty Zippo lighter from her jacket pocket and flicked the tumblewheel. Reddish flame haloed out around them.
“Angel hair...” she quietly scoffed. There were no such things as angels so finding bits of their hair was next to impossible. “Sometimes,” Lorelei hissed, “I can’t believe we’re friends.”
“We’re a lot more than friends,” he said affectionately.
“Well... sometimes I can’t believe that either.”
They made their way up the stairs to the fourth floor. All along the walls were pale rectangles marking where pictures had once been hung. Lorelei wondered what had been there. Paintings? Photographs? One hundred year old framed erotic woodcarvings?
“What are you snickering at?” Magwier asked softly.
“Private joke.”
He raised an eyebrow, the crimson light from her haunted Zippo made him look demonic. What am I doing with this man? Lorelei wondered. I like him but he loves me...

“Oh!” Magwier said suddenly, “Excuse us...”
There was a woman at the end of the hallway; her figure was swollen and ugly, she wore a short, ill-fitting apron of red leather. At first Lorelei thought her face was locked in an idiot gape but then she realized the woman was wearing the mangled head of an inflatable sex doll over her face.
Lorelei asked, “Who are you?”
“Baby’s...” the grotesque figure’s voice was small and frail, “...Breath.”
“We don’t want any trouble,” Lorelei said.
Baby’s Breath cocked her head, “...are you angels?”
Lorelei didn’t answer, she didn’t dare. Theology and lunatics were always a volatile mix.
“There was an angel. His touch was like glass,” the masked woman whispered.
Magwier eye’s brightened with interest, “What do you-”
A tearing sound interrupted them. Something wet and gleaming dropped from between the legs of Baby’s Breath. It hit the floor with a splat and began to mewl. It tried to creep away, dragging itself turtle-like by its wings.
“Oh sweet holy fuck,” Lorelei said.
Baby’s Breath ignored the crawling thing and said, “You want the hair... they always want the hair...”
“Oh no,” Magwier said, “I have plenty of hair. I mean you should see my back. Am I right Lorelei?”
Lorelei didn’t speak, she just watched the grotesque figure drop to her knees looking like an animal getting ready to attack. “Magwier...” she said softly, “I think we should get ready to split up.”

He was incredulous,“You want to talk about our relationship now?”
Baby’s Breath charged at them.
Magwier pushed Lorelei aside and ran for one of the fourth floor’s empty rooms, the figure in red leather hot on his heels.
The impact with the floor momentarily dazed Lorelei. She heard a crash and Jason Magwier making a gurgling sound. Her Zippo was on the floor near her feet. She grabbed it and made a run for the doorway she had seen her lover disappear into.
Baby’s Breath was strangling him. He clawed at the hands around his throat but his eyes were starting to roll back.
Lorelei saw that Baby’s Breath was naked save for her ridiculous mask and red leather apron. Another squealing thing dropped out from between her legs and plopped onto the floor. Lorelei darted forward and flicked her haunted lighter scorching the madwoman’s exposed backside.
She screamed and dropped Magwier. Now it was Lorelei’s turn to run. She made it all the way to the top of the stairs before thick fingers tangled in her hair.
This is it. She thought, I’m going to die and in an appropriately ridiculous manner.
“WAIT!” Magwier shouted in a croaking voice.
Baby’s Breath turned in place, dragging Lorelei with her. The grotesque woman snarled a challenge.
There was an strange glint in Jason Magwier’s eyes. He extended one arm and hooked the other on his hip. Then he began to sing, “I’m a little teapot short and stout. This is my arm and this is my spout...”
Baby’s Breath drew back in confusion, her grip loosened and Lorelei pulled free.
Once she had blundered two steps back Lorelei spun around with and caught the other woman in the chest with a clumsy kick.
Clumsy but effective. Lorelei thought.
Baby’s Breath clawed at empty air as she tipped backwards and went crashing down the four flights of stairs. She hit the bottom landing face first and her stomach split open like a rotten melon. Tiny figures, wet misshapen and half squashed, crawled free.
Jason Magwier put his arm around Lorelei, she leaned her head on his shoulder. “What were those things?”
“Little messiahs,” He said, “come on, lets get that hair and go home. We can stop by the frozen custard stand if you like.”
They turned to leave, then Lorelei paused and punched him in the arm.
“What was that for?” Magwier asked.
When she spoke her voice was full of annoyed disbelief, “I’m a Little Teapot?”
at October 14, 2010 9 comments:

Email ThisBlogThis!Share to TwitterShare to FacebookShare to Pinterest
Labels: fridayflash, The Nick Of Time (and other abrasions)

The man speaks the truth, life does get better. If any of you ever feel like you might hurt yourself get help. If I hadn't gotten help I might not be here typing this to you now...

He watched as heroes become reviled as traitors and the great truths were dismissed as lies. Just an average day at FOX NEWS.

They thought she was crazy to build a filtration system out of an old mattress but soon people were lining up for her spring water.

The sickening smell of rotting flesh was becoming overpowering, reaching under the door that was now always closed, into the corridor beyond.

The nurse took a deep breath outside before knocking and stepping into the small room...

Thanks to HEY! LOOK BEHIND YOU! for recommending this.

I should be ashamed of myself for laughing at this video... and so should you!