Since I am on sabbatical this Halloween why not check out one of the best pieces of horror fiction I've read all year?

THE SPIRE IN THE WOODS

Robert Edward Kennan killed himself in the Fall of 1999. I wasn’t there but it’s where my story begins. It begins with Rob, 17 years old, sitting in a burning car in the middle of a crowded parking lot one Monday night in October. He burned for nearly four hours before the police let the firemen near enough to put out the flames and pull out his body.

I didn’t know him. Not really. We lived in a small town. I knew him by sight, knew his name, but I doubt I’d ever exchanged more than a few perfunctory words with him. It makes me feel funny talking about him, like I’m not justified doing it, but if I’m going to tell you about the Spire, it’s unavoidable. I have to tell you about Robert Edward Kennan and how the suicide notes he left behind tangled my life up with his.

Back then, we both lived in a sleepy town in New England, a little over an hour northwest of Boston, just across the New Hampshire border. It’s the sort of place that’s nice to live, if you’re the sort of person that doesn’t like doing very much. There’s really only three reasons anyone ever steps foot in my hometown. The first is that they’re on their way to Nashua, the shopping Mecca of the northeast. The second would be the ice cream. We have a dairy farm where they sell the world’s best ice cream. Thirty flavors, all of it made right there on the premises. And the third is because they bought one of those “Haunted New England” books.

If you buy one, you’ll find our town in there twice. The first entry will likely be the story of how our high school, which is one of the ten oldest in the country, came to have the Silver Specter as its mascot. I always thought that the Specter was a wonderful mascot. Much more interesting than the “Fighting (fill in the cat species here)” everyone else seems saddled with, and it reflected how steeped in folklore rural New England once was.

Way back in the 1880s there was a terrible blizzard. A proper nor’easter. It dumped several feet of snow across the whole region. There were many, many casualties, mostly the very young and very old stuck in their homes without heat. One of the exceptions, who was neither very young nor very old, was Jennifer Wilkins. She was a teacher, trapped in the school when the blizzard hit.

What little food there was in the school house couldn’t have lasted more than two days, and folks say by the fifth, she had resorted to boiling her boots, to soften up the leather for eating. It was two weeks before anyone was able to reach her. They found her, body thin as a matchstick, wrapped up in a gray wool blanket. If only they’d had paste in those days, she might have made it.

That old school house is now our town rec center. Supposedly, old Jenny still haunts its halls, wrapped in that gray wool blanket, her hollow, emaciated visage searching in vain for something to eat. I was there alone once, up in the rec center’s attic, when I was eight or nine. This was before I knew the origin story of our high school mascot, but even still, it was creepy. It was August, and I had snuck away from the rest of the summer reading program I was in. The attic was filled with these strange drafts, hot and humid mostly, but step in the wrong spot and you could practically see your breath. I told my mom about it, and she was the one who told me about Jenny.

The second story is that of the Blood cemetery. They call it the Blood Cemetery (its real name is the Pine Hill Cemetery) because it’s supposedly haunted by Abel Blood and his family.

The story says Abel Blood lived in the center of what is now the cemetery back when it was farmland. He returned from the fields early one day to find his wife in bed with another man— a tall, dark-haired stranger. Abel was stunned. How could Mrs. Blood, a good Christian woman, do such a thing? Obviously this scoundrel was forcing himself on his wife!

Abel retrieved his pitchfork and charged back into the house, his mind full of vengeance. But as he drew near, he heard his wife— mid-coitus— proclaim her love for the black-haired stranger, and with a note of satisfaction to her call that Abel had never heard before. Mr. Blood saw red.

He burst into the room, pitchfork held aloft, and ran them through. Over and over, he plunged the fork into their tangled bodies, before finally leaving them pinned, one on top of the other, to the bed beneath them. Looking at the bloody mess he’d made, Abel found his rage had not diminished. This seemed curious to Abel but it dawned on him why when he spied a picture of his family on the mantel. His children didn’t look anything like him, nor like their mother. They were all exceptionally tall, with full heads of somewhat greasy black hair.

They say his sons and eldest daughter put up a noble fight, but they were children fighting a grown man whose muscles had been hardened by a lifetime of farm labor. Only Abel’s youngest daughter, barely 5 years old, made it out of the house alive. She sprinted as fast as her little legs could carry her in a desperate attempt to reach her neighbors. But even with her head start her little legs were no match for her dad’s powerful strides. Just as she scrambled up over the stone wall separating their farm from the Hollises’, Abel picked up one of the stones and smashed it down on her head.

These days, if you go there, right at the edge of the cemetery you’ll see this curve full of skid marks. People say that they’re caused by cars swerving to avoid an oddly dressed little girl who runs out into the street each night. Back home, we had a rite of passage. As soon as you or one of your friends were old enough to drive, you had to trespass into the Blood Cemetery at night and make a rubbing of the Blood Family’s gravestones. I did it. And you should feel free to, but be prepared to be disappointed because none of the Bloods died on the same date.

A lot of ghost stories are like that. Doesn’t mean they’re not fun, but what you come to realize as you get older is that they’re mostly a form of social control. Jennifer Wilkins really did die a horrible death, but the story of Abel Blood is nothing but a fantasy story with a rather dark, misogynistic message: cheat on your husband and he’ll kill you.

I loved ghost stories growing up. Loved them. That’s what gave me my not-entirely-unearned reputation as “the spooky kid.” It was the reason that about a month after he died, Rob Kennan’s suicide note wound up in my lap. There, buried in the middle of apologies to his family and clear evidence of severe depression, was my first push towards the Spire in the Woods, the only ghost story I truly believe...

...she passed just a little while ago. 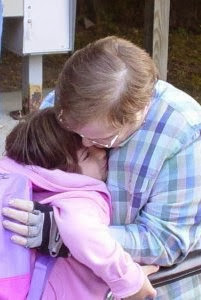