My name is Mike and about 3 and a half years ago, I was working at this call center in an industrial area. The only other buildings around us were warehouses, a dump, a juvenile hall and trees.. it was a small but lively place.. about 100 employees or so and because it was in a small town, it had that small town or should I say, high school mentality...

Email ThisBlogThis!Share to TwitterShare to FacebookShare to Pinterest
Labels: it came from nosleep, recommended reads

(Recommeneded Reads) A Hero Comes Along by Icy Sedgwick

St Joseph's Cemetery isn't the nicest place to put someone to sleep. Still, the dead don't get much of a choice in the matter. We're expected to lie back and not make a fuss. For the most part we do, but every now and then, one of us has unfinished business, and can't rest....

Taking a week or so off from story posts...

...but fear not there will still be the usual assortment of geek-centric articles, insane news and pictures of girls with big booties!

I just need some time to get my upcoming writing projects in order.

So the prose starts again in ten days-

August 19th - A new #FridayFlash and the begining of my first multi-part LOCAL HEROES storyline.

As always thank you for visiting and keep circulating the blog!

Where are the Route d'Abbaye stories?

Well they aren't gone they just aren't listed in the table of contents anymore.
I plan to revise them and make them fit together as a sequence better (I hope).
We will see what happens.
Please don't be angry about it, it will make me cry... 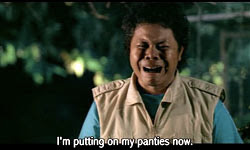 The Nick Of Time (and other abrasions): Jason Magwier Winds Up In Cleveland 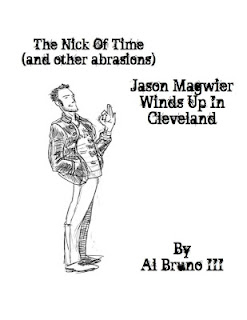 Jason Magwier Winds Up In Cleveland
by
Al Bruno III
It was a plain storefront building on a street called Euclid Avenue in Cleveland Ohio. The front doors were vault-like and well guarded, past them was the nightclub itself. It was small and clean, tables were arranged around a long bar. In the far corner a jazz trio played a ghostly, rambling melody. There were no mirrors or electric lamps anywhere.
Pexley Aldorus sat alone, drinking and sweating far too much. He was pudgy with thick glasses that gave him an owl-like appearance and a droopy mustache that made it seem like he had something to hide.
This place wasn't just a cabaret, this was the Chiliad Fellowship and Pexley was all to aware that he didn’t belong here. But what choice did he have? If he didn’t move fast Yi Fen would put two and two together and realize he’d been swindled. There was only one place Pexley could risk making a sale and only one man he could risk making a sale to.
So this was it, do or die, all or nothing, Cleveland or certain death.
Pexley had one last drink before he approached his perspective buyer. The man was dark-haired and wore a battered leather jacket. His arms were crossed, his head was down, he looked like he might be asleep or dead but when Pexley was a half step away he said, “Mr. Aldorus I presume?”
“Yes...” Pexley grabbed a chair from an empty table and dragged it over, “...and you’re Jason Magwier.”
“Indeed,” Magwier opened one eye, then another, his expression became cheshire-like, “I’m surprised you wanted to meet here. You aren’t really Chiliad Fellowship material.”
“I came with a friend... Agnes Trim... She’s gone home now.”
“And now here you are, a mayfly among the cicadas,” Magwier made a show of sniffing at the carnation pinned to the lapel of his leather jacket.
A chill ran through Pexley’s blood. A white carnation? Yi Fen wore a white carnation! Pexley told himself it had to be a coincidence or a trick to put him on the defensive.
“I thought you traveled with a bodyguard,” Pexley said, “a black man with a taste for firearms?”
“He prefers to think of himself as a poet,” Magwier said, “but enough of that, I believe you have something you want to show me?”
Pexley cleared his throat, “Yes, I recently came into possession of a rare item.”
“You don't say?”
“I have the Devil's Pocketwatch,” Pexley pulled the item from his coat. It was oval shaped and made from copper and gold, it dangled from a red chain.
“The Devil's Pocketwatch?” Magwier reached for it only to have it snatched away.
Pexley said, “I can see you're interested. Are you ready to name a price?”
Magwier fiddled with the white carnation, trying to keep it from going crooked, “I don't think you understand what you have there.”
“I understand,” Pexley slipped it back into his coat. “and I've tested the goods. This watch lets you go back and re-experience your sins. You feel everything you felt before. It's more than a memory and less than real.”
“Oh, it can do far more than that,” Magwier said, “it can actually move you back along the skein of your misdeeds. You can bend back time.”
“If you say so,” Pexley shrugged. “You can use it to make frozen custard for all I care, but how much are you willing to pay? I take cash, credit or black rubies.”
“My offer is this. You give me the watch and I'll protect you from the inevitable reprisals that are coming your way.”

“I won’t waste my time with nonsense,” Pexley grimaced as he stood up, “I thought you were a man with foresight.”
He walked away hoping Magwier would call for him to come back but he didn’t.
Once he was alone on the darkened streets, Pexley had to fight the urge to kick something. What a waste of time and resources this night had been.
An arm wrapped around Pexley's throat. The movement was so sudden and forceful that he felt his ears pop. Then suddenly there was a familiar voice in his ear and a familiar knife at his throat.
“You didn’t think I’d know what you did?” Yi Fen said.
Pexley tried to talk but the arm around his throat was like a band of iron. He realized that when the knife touched his skin he wouldn’t even be able to scream.
Something sizzled past Pexley’s ear. There was a wet pop and suddenly Yi Fen was dead. Just as suddenly Pexley was face down on the pavement. He would have been content to stay there for a few minutes but someone was already pulling him to his feet.
“I’m surprised you wanted to meet here,” Jason Magwier said as he brushed him off, “you aren’t really Chiliad Fellowship material.”
“I...” Pexley gasped, “...you?”
“Me?” Magwier smiled, “No not me. My friend Zeth happened to be writing sonnets on a nearby rooftop when he spied your predicament.”
Pexley looked around in confusion, “What?”
“Luckily he brought his rifle,” Magwier drew closer, “this is a rough neighborhood.”
Pexley was so dazed he didn’t even realize that Magwier was going through his pockets until after he had taken the pocketwatch. “Wait!”
“Payment for services rendered,” Magwier smiled, “or rescued as it is.”
“You planned this!”
Magwier kicked over Yi Fen’s body and after a moment’s consideration of the neat head wound, plucked the white carnation from the dead man’s dinner jacket. “No, I just knew this would happen.”
“Then why didn’t you warn me?” Pexley demanded.
“Maybe I wasn’t sure, maybe I was guessing,” grinning to himself Magwier put the carnation into his empty buttonhole. Then he began to wind the Devil’s Pocketwatch, with each twist he became more and more translucent, “Or maybe it was just a sin of omission...”
Then he was gone and Pexley was alone on the streets of Cleveland.

Email ThisBlogThis!Share to TwitterShare to FacebookShare to Pinterest
Labels: fridayflash, THE NICK OF TIME and other abrasions

Since every other blog is posting it - here is our first image of our new Superman!

Welcome to the franchise Henry Cavill...

Email ThisBlogThis!Share to TwitterShare to FacebookShare to Pinterest
Labels: superheroes

It's deja vu all over again!

(Insane News) "He's got the bunny outfit, a cowboy suit and a ballerina dress but you don't see him except where he's tripping through his backyard..."

Police in Idaho Falls have told a man to stop wearing a bunny suit in public after people complained he has been frightening children... one neighbor defended Falkingham as eccentric but otherwise harmless.

"He's got the bunny outfit, a cowboy suit and a ballerina dress but you don't see him except where he's tripping through his backyard," Deborah Colson told Reuters. "He's got a strange lifestyle at home but we all do weird things at home."...

Sir Timothy Of Kent got to see YELLOWBRICKROAD before I did! WAHHHHHHHHH! No fair!

He posted a very well thought out review on his blog... check it out!

YellowBrickRoad, from the writing/directing team of Andy Mitton and Jess Holland, is frustratingly close to genius.

The powerful set-up (detailed above) had me hooked from the outset with its Lovecraftian overtones and engaging mystery, and this certainly isn't a movie that spoonfeeds answers to its audience.

I love a good mental challenge as much as the next person and films that don't necessarily spell out everything that's going on, but YellowBrickRoad suffers because - in a similar way to Lost - it is ultimately too obscure and obtuse.

While it is certainly a film that will stay with you as you try to ponder what fate befell the inhabitants of Friar - and the contemporary expedition  - I don't believe there are actually enough clues to adequately fill in the gaps....

Only one thing can salvage this miserable Tuesday...