The trailer for FROGZ LEGZ reveals the dangers of Innsmouth jailbait!

And this puts me in the mind of a song!

THE LOCAL HEROES: A Final Appointment With Doctor Kjærlighet 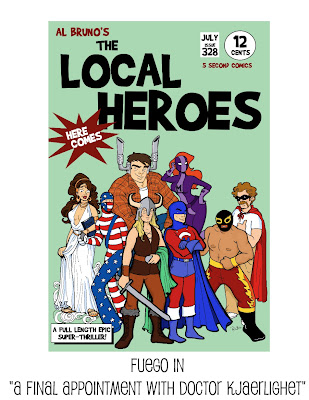 A Final Appointment With Doctor Kjærlighet
by
Al Bruno III

It was midnight. The full time-Luchador and part-time crimefighter known as Fuego stood in the entranceway to the Guzmán Huerta Sports Arena. The pale hallway lights gleamed off his bare chest, his red tights were torn, his black fiery mask was stained with blood.

Up ahead the corridor widened out into the stadium seating that surrounded the wrestling ring. A crowd of mobsters and thugs armed with bats, knives and chains waited for him.

Fuego barreled into the midst of them, toppling the first wave of attackers like dominoes. He had no fear of these men, not after he had escaped the death of a thousand screams with three hundred screams to spare.

When there were just two criminals left he smashed their heads together and let them fall to the floor. That done he ran to the center of the arena leapt into the air and landed gracefully in the center of the canvas square. A single spotlight shone down on him. “Kjærlighet!” Fuego shouted, “You murdering coward! Come out and face me like a man.”

“That’s Doctor Kjærlighet to you,” a harsh voice said from somewhere in the audience.

“Then face me like a doctor!” Fuego roared, “Your reign of terror ends tonight!”

A tall man wearing white and black tights climbed into the ring. A silver cowl concealed Doctor Kjærlighet’s features, a thick gold belt encircled his waist; the masks of fallen luchadores hung from the belt like scalps.

Fuego knew those masks, they belonged to his fellow members of the League of Extraordinary Luchadores. This could only mean they were dead. Fuego weakened momentarily at the thought. Their names echoed through his mind- Tierra, Vivento, Agua, Demonio Amarillo, Gigante Maya and Phil... All gone forever, betrayed by one of their own.

“You were the world’s only Norwegian luchador,” Fuego’s voice quaked, “why did you sell your soul to the evil gods from space?”

Doctor Kjærlighet said, “Because I was the world’s only Norwegian luchador.”

The two men circled one another, sizing each other up. Fuego made the first move, a backhand chop that made his opponent double over. Fuego followed that attack up with an elbow drop. Doctor Kjærlighet fell to the mat. “You are no match for me!” Fuego placed his opponent into a chin lock, “No man in the world is!”

The traitorous luchador chuckled, “That is your final mistake then for I am no longer of this world.” Doctor Kjærlighet raised his left arm. It split apart from the elbow down. There was no blood, instead it bloomed, remaking itself into a three foot claw ringed with a nest of tendrils that hissed like serpents.

“Ay dios mio!” Fuego cried as he found himself tossed eight feet into the air. This was the ultimate foreign object in the ring!

Fuego crashed back down onto the mat with bone jarring force. He tried to stand only to find himself caught in an over the shoulder arm drag. He tried to slip free but the grip of Doctor Kjærlighet’s claw arm was unbreakable. The serpent-like tendrils snapped and bit at Fuego.

“It was so easy to destroy you all,” Doctor Kjærlighet placed the hero into a bear hug and slowly began to tighten his grip, “now die!”

Fuego rolled away towards the center of the ring and got back to his feet. Then he ran at his opponent again and delivered a flying scissor kick. Doctor Kjærlighet shrugged off the attack and threw Fuego into the ropes.

It was easy enough for Fuego to untangle himself. He scrambled back to the other side of the ring and waited. What would come first? An attack or a speech?

Right, Fuego thought, a speech it is.

Doctor Kjærlighet shook his human fist as he spoke, “Once I have destroyed you I shall go to America!”

“America?” Fuego readied himself. He pulled off his right glove where a wise professor had tattooed the dreaded Elder Sign.

“Yes, America. And in that land I will defeat every challenger until I am declared the supreme champion!”

“Then every wrestler in the world will bow down before me!” Doctor Kjærlighet threw out his arms in a gesture of triumph, “I will become more powerful than Ed McMahon himself!”

That stopped the villain in mid-rant “Eh?”

“Vince McMahon is the man all the wrestlers in America bow down to. Ed McMahon was on the Johnny Carson show.”

When the smoke cleared all that was left was Fuego kneeling in the center of the ruins. Doctor Kjærlighet and his henchmen were gone, incinerated.

“What have I done?” Fuego gasped.

To take a life was a betrayal of everything a luchador stood for, to kill so many at once and like this was impressive but unforgivable. He reached up to grab at his mask and began to pull at it. To remove the mask was to die but wasn’t that what he deserved?

Or would that give Doctor Kjærlighet the final victory?

The sound of sirens and commotion began to draw in around him. Fuego left his mask on but knew he could no longer stay in Mexico City. He would have to go somewhere else and redeem himself.

Perhaps someday he would return but for now he would go to America.

He had heard stories of a place overrun with crime, ghouls and random giant robot attacks, a place called River City. He vowed to save that city, to fight for truth and justice until its citizens had safety and prosperity in a headlock.

But first Fuego needed to remember where he had parked his car.
at August 09, 2012 1 comment:

Who would win in a race- Superman or The Flash?

That's right! Another nerdy poll question. A question so contraversial they had to shut down the DC comics message board thread about it!

Stop by the WIT AND WEIRDNESS OF AL BRUNO III to cast your vote!

The Poll results are in and the majority of you wouldn't mind having POD versions of my works available.

Thanks for voting!
Now I have to figure out how to format these things so they don't look like deranged 4th grader's book report.
I'll keep you posted on how things go.
at August 05, 2012 No comments:

Email ThisBlogThis!Share to TwitterShare to FacebookShare to Pinterest
Labels: using by blog to talk about my blog

(Recommended Reads) 'Beyond The Theatre Of Hands' by Daentric

"He's not going to be asleep forever! Get the coin ready and wake him up!" A voice barked from outside my room. The sound of several people moving around barely seeped through the walls. What were they doing? What, "coin," were they preparing?

My room was anything but familiar; the walls, bed, and cabinets were colorless voids of white. Maybe this was a mental hospital of some kind, not that I recalled demonstrating unstable behavior. Actually, I didn't remember much of anything; where I worked and who I cared about didn't register. There weren't many clues available in that little white room, but there was something. My head had unexplainable pressure pulsing from the back; it wasn't painful, but once I noticed the pulsing I couldn't focus on anything else. Was it some kind of injury? The urge to reach back and feel the area was too much to pass up, so I carefully felt the back of my skull...

FASCINATION WITH FEAR praises THE SENTINEL.

Greetings, horror lovers! I’m going to tell you all about a movie that if you haven’t seen, you must. It isn’t very well known among my generation, some people my age know only of the horror movies that rely on sound cues and jump-scares. They don’t know about the golden era of horror, the 1970’s, when the films were original and the scares were real.

Nothing new or Earth-shattering to be found there but you might enjoy it. Stop by and say Hello!