The nude rapper liked to end his shows by yelling “Piece out!”

“It there's one thing I've learned it's never to trust a funeral parlor with a free buffet.”

It wasn't until her fifth marriage in six years that she realized she was addicted to wedding cakes.

THE DARK KNIGHT OFF

This madness courtesy of GEEKOLOGIE

Email ThisBlogThis!Share to TwitterShare to FacebookShare to Pinterest
Labels: humor

And in honor of my crappy week - FULL METAL DISNEY!

There, now I feel better... 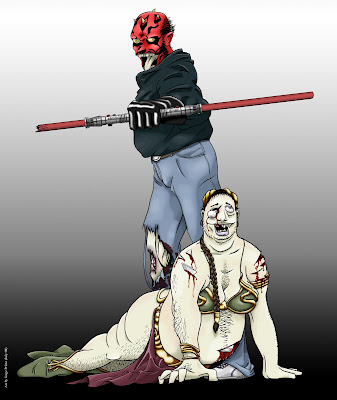 The front door of the house crashed open, Mark let the rake go so he could glare at Alec, “Well I hope you’re happy because –”

Except it wasn’t Alec standing there, it was a dead woman with blood all over her and one of her eyes dangling loosely from the socket. Snarling she shambled towards Mark. The zombie in the car was gnawing eagerly on the rake.

A cluster of ten of the things rounded the corner, their voices a mumble of misery and hunger.

Mark dove for the ten speed bicycle and started pedaling. In less then a minute he was back on the deserted street, he angled the bicycle so he was heading for Central Avenue and let himself coast for a moment. He couldn’t stop wondering what had happened to Alec in that house.

Mark felt a twinge of remorse at the thought. What if Alec wasn’t dead? What if he was trapped and waiting for rescue?

Central Avenue was a maze of wrecked cars and shattered storefronts, there was broken glass everywhere. Mark steer the bicycle onto the sidewalk.

A minivan lay toppled on its side, its empty window frames gaped, the child protective seats lying tattered and broken nearby. The internal DVD player was still something shifted inside the minivan.

Mark said to himself, “It looks like they’re all heading in the same direction, northeast.They’re going deeper into the suburban neighborhoods, by now they might have reached… home.”

Mark started pedaling faster. In his mind's eye he could already see his parents’ house. The front door battered down, his parents retreating against the scores of hungry dead. He imagined them blundering further and further back into the house until finally they found themselves cornered in his room. Mark flinched away from the vision of his parents being torn limb from limb, their precious lifeblood forever staining his Star Wars collector plates and action figures.

The edge of his Jedi robe snagged in the spokes of the bicycle's rear wheels dragging him backwards off the seat. The bicycle flipped over. Mark's head hit the pavement with a resounding crack, stars flashed before his eyes.

Then the bicycle landed on his crotch and the stars made the leap to hyperspace.

Blinking back tears Mark tried to stand but everything hurt too much. This would never had happened if he had worn his Storm Trooper outfit. If only he could have found that damn codpiece! Hissing with pain he brought himself to his knees and realized he had an audience.

There were at least ten of the zombies, milling characteristically around the entrance of a pet store, their hands dripping with the remains of gerbils and wiener dogs. They watched Mark gasping and struggling to his feet with detached fascination.

He started trying to back away only to spy a trio of zombies flanking him. The fat fanboy in Leia’s metal bikini was among the walking dead; his flesh was scored with lacerations, bite marks and electrical burns. When it raised its arms and shambled forward the bottom half of its costume fell away.

“Oh God. Oh my God...” Mark tried to break into a run but only ended up tripping over the bicycle again.

The zombies standing in front of the pet store let their half-eaten meals slip from their hands and moved as one towards him.

A thought stopped Mark in mid-cringe.

Why not? What do I have to lose?

Mark tried to calm himself, tried to become one with the mysterious, germ-carried universal power that bound and controlled the all living things. He raised his hand and tried to push the zombies away with the very force of his will.

The zombies were drawing closer. Mark closed his eyes and tried to let go of his feelings.

A spark seemed to flare inside him, a sensation that even in the midst of this nightmare there was something more, there was someone watching over him.

I think I can really feel it. And I can almost hear Alec’s voice.

“-I said what the Hell are you doing? Get your head down!”

“What?” Mark opened his eyes to see a red escort parked nearby, Alec was leaning out the driver’s side window with a shotgun. Mark ducked. Alec fired again and again. Zombies toppled like dominoes. Blood and splinters of bone filled the air.

Slowly, Mark stood on wobbly legs. He tried to flick the gore off his clothes and out of his hair but there was too much of it. “And I thought these things smelled bad on the outside.”

Alec got out of the car, reloading and watching the alleyways, “And I thought I told you to stay put.”

“So what now?” Mark sat down, he couldn’t stop shaking.

“The radio says the army has a refugee center set up at the Watervliet Arsenal, we could head there.” Alec got behind the steering wheel, handed the shotgun to Mark and started fiddling with the seat, “I can never get these things right…”

“Sure. Sure.” Alec put the car in drive.

The red escort started moving down the street, weaving between the wrecked cars and upended garbage bins.

“So…” Alec asked, “What were you doing back there when I showed up?”

The older man cracked a wicked grin, “It looked to me like you were trying to use the Force. Didn’t work did it? You’re damn lucky I saved you, damn lucky.”

Mark turned to glare at him, “What do you want? A medal?”

Click Here To Read The Next Story 'Attack Of The Crones'

And now a look at David Tennant from the FRIGHT NIGHT remake!

Peter Vincent is a magician in this version?

He read the memos from the central office religiously but never took them as gospel because it was one damned thing after another.

In his later years Lord Greystoke left the jungle to start a vineyard. That was how he came to be known as Tarzan the Grape Man.

At first she was excited that her milkshake brought all the boys to the yard, then she discovered they were all lactose intolerant.

5 Second Fiction One Thousand Five Hundred and Forty One

It turned out the members of the Black Robed Regiment dressed that way to hide their frilly lingere.

Of all the members of Abner Deggent's rogues gallery the ex Nazi Wilhelm Screame had the most distinctive battle cry.
at August 30, 2010 No comments:

He wanted to be a gigolo but wasn't sure if he could satisfy an older woman, so that first time was something of a dry run.