MY FICTION: The Ocean Doesn't Want Me 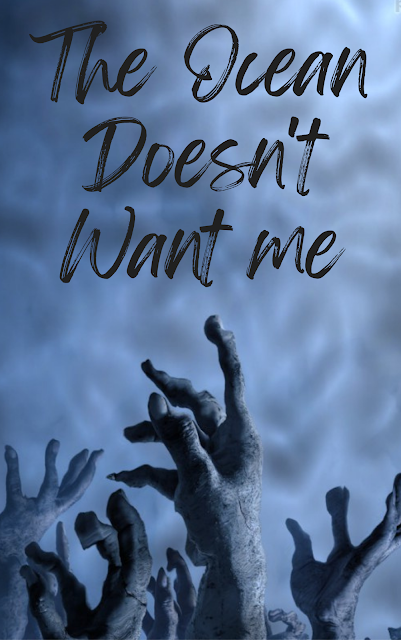 I think I'll start with the alarm. It was a loud and ugly electronic sound. At first, I thought it was part of a dream brought on by the pain or the morphine. But once I had fully awoken, I realized I was alone in the infirmary of the cruise ship. I swung my legs out of the cramped little bed and put my hands to my ears. The infirmaries’ cheery colors and oversized photographs of tropical scenes made me want to punch about a dozen different people in the face - starting with my travel agent.

I staggered into the bathroom and tried to pee. Pain like a hot wire lancing from my balls to my spine left me gritting my teeth but all I was rewarded with was a pitiful squirt. A promise of torments to come.

You think you're in charge of your body, but even if you take care of yourself, there could still be surprises in store for you. Even if the spirit is willing, the flesh is weak. It was kidney stones. I was having a kidney stone attack while I was on vacation. And not just any vacation, a week-long singles cruise on a ship that my travel agent winkingly referred to as the SS Hedonism. We were out in the middle of the Pacific ocean and there was no way they were going to turn around and take me to a hospital on the mainland, not when they had a whole cruise ship full of horny middle-aged singles and college-aged gold diggers to think about. No, the ship's doctor had decided to keep me stoned and under observation. Every once in a while, between bouts of treating alcohol poisoning and passing out handfuls of Valtrex, he would stop by and pat my arm and gazed down at me with trained benevolence.

After a while, I pulled my complimentary pajama bottoms back up and flushed away the pale pink water. The infirmary was still empty and the alarm was still blaring. I wondered if this was some kind of a fire drill. If it was, you would think somebody would have warned the poor sap from cabin 434 D. That thought, led me to an even worse thought. What if this wasn't a drill and everyone had decided the poor sap from Kevin 434 D could go fuck himself.

I walked out into the empty hallway, trying to find someone, anyone that could tell me what the hell was going on. There wasn't a ship steward or a fellow passenger anywhere. The only company I had was that shrieking alarm. Some of the cabin doors were open. I stopped to look around in a few of them. They all looked like whoever had been there had left in a hurry.

TVs were still turned on and the showers and faucets were still running. There was nothing else I could do but keep searching. I thought to myself that we must be at least three days out to sea now, the halfway point of the trip. I had only gotten to enjoy the first day of the cruise.

The sun had been shining and the waters of the ocean had been clear and blue, like something out of the movies. I even saw dolphins chasing the ship. Everything had been just perfect, I made some friends and even brought a woman I barely knew back to my cabin for a little fun. She was no bathing beauty, but she was up for anything. And two years after my divorce, a little willingness, and a little soft lighting was all I needed.

Of course, all that ended the morning of the next day peeing blood. At first, I thought my one-night stand had given me some kind of fast-acting super VD, but the ship's doctor sent me straight. He even assured me that the worst was probably over and I'd be up in about no time.

The alarm stopped. The silence was startling. When you're on a cruise ship, there are all these different sounds. The sounds of walking, talking, and piped-in music, even the faint hum of the engine was there. If you listened for it.

With a  little work, I'm sure the story it would have made for the worst penthouse forum letter ever. I stepped out onto the deck. The air was warm but the breeze was cool. I made my way around the lower deck, finding abandoned drinks and belongings, but not a single person. I was alone.

The Lido deck seemed like my next best bet I figured that if I didn't find anyone, I could at least grab a bottle of tequila from the unattended bar. My body didn't take kindly to the stairs so I moved slowly and tenderly. I found the Lido deck just as empty as the lower ones so went behind the bar and helped myself to a bottle of tequila. Leaning against the bar I started medicating myself and My best bet seemed to be getting to the bridge and trying to radio for help. I looked around, figuring there had to be a service elevator somewhere. That was when I saw him.

He was dressed in the uniform of a ship's crewman, but he was barefoot. The expression on his face was crazy. His eyes bugged out. He had gnawed on his lips until they were dripping and ragged. I was so startled and repulsed that I didn’t even notice he was carrying a fire ax until he charged at me.

I ducked behind the bar. He came after me, each swing of the ax shattering one bottle of high-class booze after another. He was babbling the whole time but nothing he said made sense.

“This sky broke open!” He said, “And it reached down with arms like white jelly…” The mirror behind the bar shattered. Broken glass was everywhere. Then I saw he had gotten his ax stuck in the wall. He was trying to tug it free. I got to my feet and clocked him upside the head with my tequila bottle.

He dropped his face, all blood. He whimpered “Why wouldn't it take me?”  before he became silent. I watching him die with a sensation of relief and horror.
This only left more questions. There was no way that guy could be responsible for the missing passengers and crew. I mean, if he had been, the hallways would have been a lot messier.

I searched around the bar until I found an unbroken bottle of gin, then I headed for the bridge. The idea of climbing three more levels of the stairs didn’t exactly thrill me, but I didn't see much of an alternative.

This next part is the craziest part. It's the part I don't think you'll believe. You'll probably think I was drunk or stoned, but I know what I saw. And if you don't believe me, then you can say whatever the hell you want about what happened on this ship. With any luck, I won't be around to argue with you.

It was everyone from the ship, everyone, but me and the dead man on the Lido Deck. At first, I thought they were all dead and the motion of the waves against the ship was keeping them clumped together.

But the shape was too uniform for that. It was almost as though they were swimming together in formation like a school of fish. I started to shake all over.

When the shape breached the surface of the water, my legs went weak and I had to grab the stairway rail to catch myself. It came out of the ocean like a whale. It was bloated and misshapen. The bodies had melded together, flesh threading into flesh. Live faces stared out of that tangle of limbs and torsos, more faces than I could count. They stared out into the world with eyes that were aware and full of ecstasy.

The thing was only visible for a moment before it crashed back down and began to recede deeper and deeper under the water, slipping purposefully down into the depths until it was gone from sight.

Why did it choose that moment to reveal itself? Was it waiting for me so I could bear witness and tell the world?

Did that make me lucky or damned?

All I do know is that once I'm done writing all this down I'm going to go back to the infirmary. I'm going to find where they keep the morphine or sleeping pills and with any luck, I'll be long dead by the time you find this

But I worry that I might lose my nerve. That the will to live is stronger than my need to forget what I've seen.

Even when the spirit is willing, the flesh is weak.

Email ThisBlogThis!Share to TwitterShare to FacebookShare to Pinterest
Labels: Channel Ab3 Library, horror fiction, my fiction, stories in the key of lovecraft