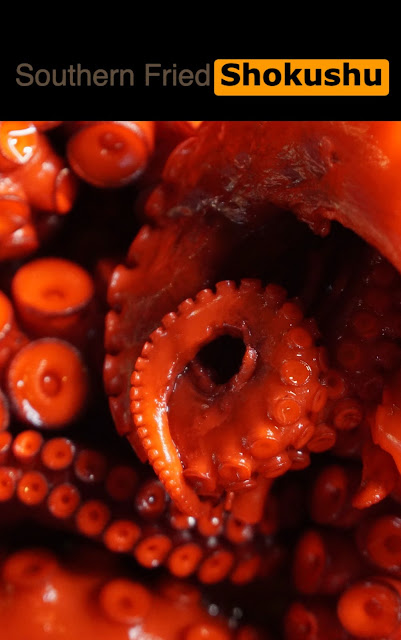 Jessie Warren and his get rich quick schemes made him a source of embarrassment for the whole town of Zebulon, West Virginia. I got no problem tellin’ you and your deputies what I know but don’t try and pretend that you aren’t just a little bit glad that he’s out of your hair for good.

Did I know what he was up to this time? Of course, we were best friends, sworn blood brothers and I got the hepatitis to prove it. I was always the first person he came to when he had one of his money-making ideas. Jessie could always make things sound so simple. Why not make brew moonshine? Why not cook some meth? Why not start selling counterfeit fainting goats?

We discussed the whole thing over coffee at Ralph’s Diner. See I figured that he’d want to do something normal and wholesome like the Bangbus but in a pickup truck. But oh no, Jessie had other ideas, he wanted to do something called shokushu.

Shokushu is girls gettin’ it on with tentacles...

No, not testicles- tentacles. You know like on an octopus or a squid.

I didn’t believe him but damn if he didn’t have the pictures to prove it. I guess it was a Japanese thing. I don’t know which pictures bothered me more, the girls that didn’t look happy to be getting molested by an octopus or the ones that looked like they were having the time of their lives.

Say what you want about me Sheriff but I didn’t want anything to do with such a thing and that’s what I told Jessie. He spent the better part of fifteen minutes trying to talk me into it. He said he got a girl all lined up, said she was up for anything. I asked him who this girl was and he told me it was Eunice.

Now I gotta admit using Eunice was a stroke of genius. She is one beautiful girl and, ever since that mule kicked her in the head on prom night, gullible as Hell. I still said no and then he tells me he already ordered a freshwater squid from some guy down in New Orleans named Castro.

We all know there ain’t no such thing as a freshwater squid but Jessie didn’t want to hear it. He said he had that Castro guy coming up to his house in a couple of days.

Maybe I could have talked him out of it but right about right then Stella came over to refill our coffee cups. She took one look at those pictures of girls and octopuses and fainted. In the ensuing chaos I went my way and Jessie went his. I’m pretty sure neither of us bothered to pay the bill.

And that brings us up to tonight. It was about two o’clock in the morning when my phone rings and sure enough it was Jessie.

He’s voice is this scared whisper and he says to me, “I can’t find the squid.”

There was a long pause, mainly because I thought I was still dreaming so he spoke again.

“Are you listenin’ to me George? I can’t find the squid. I got up to take a piss and it ain’t in the bathtub no more.”

So then I said, “You bought the squid? You really did it?”

“Sure, it got dropped off this morning. Eunice helped me load it off the old man’s truck. I figured she should get used to touching it you know?”

What else could I say but, “And you put it in your bathtub?”

“It was bigger than I thought. Big as a man. It had green eyes and its skin changed color when it breathed. Eunice didn’t like it, she said she didn’t like the way it looked at her.”

Nothing he said was making sense, but that didn’t stop him-

“After Eunice left I tried to feed it a hamburger but the thing just left it floating there in the tub. Suddenly I felt real tired and went to lie down,” he sobbed a little, “I had these dreams. They were about this city with buildings all crooked and seaweed in the windows. I saw this shadow, then I felt like I was falling. When I woke up it was night time and I could hear it singing. It was coming from the bathroom and it was like nothing I ever heard before.”

A musical freshwater squid? I was speechless.

“I wasn’t scared of that thing in the daylight but now I was too scared to get out of bed. I just listened to it singing and sloshing around. By the time I got the nerve up to actually go and check on it, it was gone.”

At moments like this I always ask, “Jessie? Are you high?”

“Why was it singing? What does the song mean?”

Then he started screaming and there was these wet slobbering sounds and then everything got quiet. “Jessie!” I shouted, “Jessie are you all right?”

And then the part happened that no one believes, the that part makes me sure you’ll never find no trace of my best friend. The part that makes me tell you to drain the pond out in back of the Warren place and don’t let no one go in those woods alone.

This voice came on the line, it was all high pitched and sing-song but it spoke perfect English

And this is what it said;

“You fool, Jessie is DEAD!”

Email ThisBlogThis!Share to TwitterShare to FacebookShare to Pinterest
Labels: Channel Ab3 Library, horror fiction, my fiction, my stories, stories in the key of lovecraft