MY FICTION: Found On The Laptop Of Doctor Todd Booth 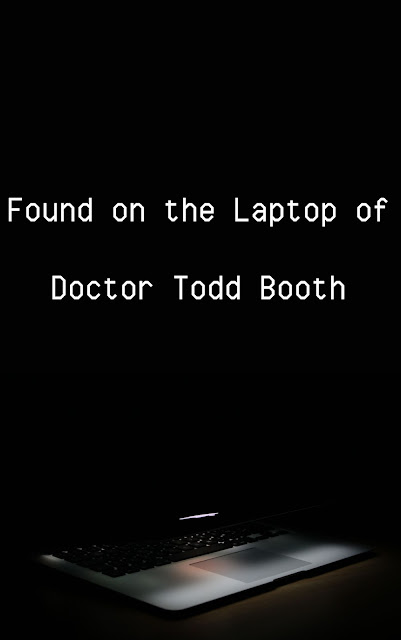 I can only hope this email reaches you. Have I ever told you that your steadfast friendship has been one of the great constants in my life? If not I should have done so far sooner than now.

The nightmare began a few evenings ago at the conclusion of my workday. I was strolling out of the Asylum, silently making my plans for yet another solitary post-divorce supper when I spied a cat lurking near my car. Its white fur was marked by a delightful confusion of calico colors. The animal appeared to be a stray but when I approached it did not flee or hiss. In fact it purred and allowed me to stroke its head.

Soft hearted as ever I decided to bring the animal home with me but when I stooped down to pick up the creature it bolted.

I watched after it, disappointed and saddened. The cat had moved with a pronounced limp, making me feel all the more concerned for its well being.

The confounded animal turned and seemed to regard me. Bemused I approached again only to have the cat retreat towards the wooded area that surrounds the Asylum.

Determined and foolish I made my way into the darkened treeline and in no time at all I was lost in a maze of hidden obstacles and shifting gloom.

Howard, I can almost hear your chortling at my foolishness. If only I could join you.

With all sight of my feline quarry lost to me I turned my attention to the task of finding my way back to familiar surroundings with a minimum of humiliation but as I stated before I was utterly disoriented. It seemed as though the very trees themselves were conspiring to confuse me. I wondered why I could not see the lights of the parking lot.

The woods around me grown so silent and so very cold. I endeavored to retrace my steps and after several frustrating twists and turns my light starved eyes began to perceive the shape of a house. There was no doubt in my mind that I had wandered so far astray that I was now approaching the neighborhood that bordered the far edge of the Asylum.

But I soon realized I was in error for there was no sign of the tall fence that separated the quiet street from the Kaydeross Asylum.

The house was the very antithesis of the kind of home you and I grew up in. Shadowed on all sides it slouched in the darkness like some great beast waiting to pounce on the weak and unwary.

At that moment I should have turned away, if not for the glint of light that caught my eye I would have.

Fitful, pallid and yellow, it emanated from the basement window. As I stood there, sweat prickling my brow, I heard sounds that rose and fell in synchronization with the twinkling light.

I crept closer, laboring to be as silent as I could. Each yard traveled seemed to take an eternity, I glanced upwards to see if I could somehow discern the hour by the evening sky but the looming trees obscured my sight. What might have been a few minutes but might also have been hours.

When I knelt beside the basement window I found the flickering light to be no brighter. The window was filthy and scratched, I had to all but press my nose against it to see clearly.

And what I saw left me so terrified a shrieking oblivion consumed my mind. I cannot say how I got back to my car no more than I can say where that terrible house truly was. All I know is that some hours later I found siting in the familiar driveway of my home. My shoes and slacks were caked with mud. When I got out of the car I screamed at the sight of the calico cat. Its mangled remains clung to the underside of the wheel well. There was something mocking about the rictus of death on its face.

Howard might well wonder what could have provoked such dread in a man you ordinarily know as cheerful and keen minded.

When I glanced in the window the first thing I saw was the shadows, twisted and swine-like they undulated around a solitary candle. That candle rested on an altar seemingly carved from a single slab of pearlescent black stone. A sense of ancient repellence came over me.

What hellish rites that altar might have presided over, and for how long? I imagined that the thing had always been there and the house had built up around it like a cancer.

Near the altar was an idol, gilded, blasphemous and unspeakably primitive, it gleamed and winked by the candle’s light. Like the altar the sight of the idol stirred in me the most primal fears.

The shadowy figures began to chant, the words made little sense to me - it seemed that they spoke a language no Earthly tongue could approximate.

But the voices Howard! Curse my ears! The voices!

I knew them, I have heard the same voices from behind the locked doors in the lowest level of the Asylum. Voices that whispered and gibbered and promised the darkest of raptures.

It has been a fortnight since that terrible evening. I have not ventured out. I have not answered the phone that rings ceaselessly. There is a frightful, feline yowling outside my bedroom window but I will not peer out of the curtain. Sometimes I hear heavy footsteps outside my bedroom door despite the fact I know that all the windows and doors of my home have been carefully locked.

I fear we will never speak again Howard, but do not investigate my fate however strange. There are things that lurk and promise in the night, there are nightmares that might one day hide behind the features of a friend...

Email ThisBlogThis!Share to TwitterShare to FacebookShare to Pinterest
Labels: Channel Ab3 Library, my fiction, stories in the key of lovecraft