(Insane News) Evil Clown Dominic Deville hired for stalking, threats and a pie in the face or NIGHTMARE FUEL!!!

Evil Clown Dominic Deville hired for stalking, threats and a pie in the face
| Metro.co.uk 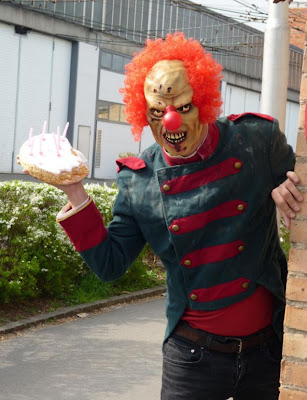 He posts notes warning children they are being watched, telling them they will be attacked.

But Deville is not an escaped lunatic or some demonic monster.

He is a birthday treat, hired by mum and dad, and the ‘attack’ involves being splatted in the face with a cake...