MY FICTION (for Eden Studios): Raiders Of The Lost Primate 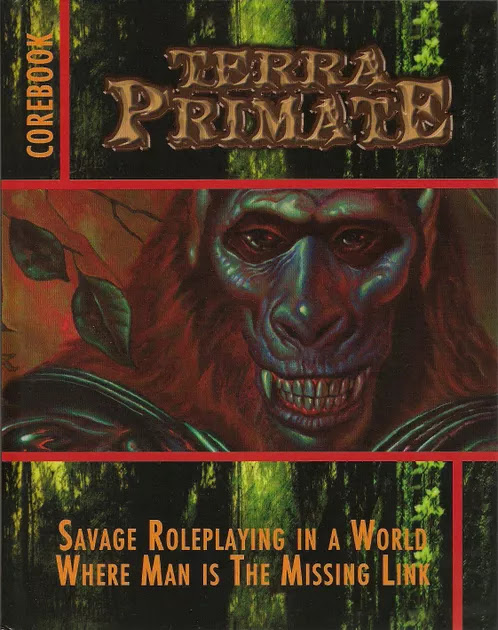 Raiders Of The Lost Primate
By
Al Bruno III
(This story originally appeared in Eden Studios' game TERRA PRIMATE)
Abner Deggent, world-renowned playboy and adventurer was used to being in precarious situations. In the last ten years he had survived shootings, stabbings and airplane crashes, he had tussled with madmen, assassins and femme fatales and left them all lying in the dirt.

The square jawed man in the torn shirt ran into the ancient temple.  It was a strange and breath-taking construct of teakwood and ivory. The archeological survey team had constructed scaffolding against the furthest wall, a hasty assembled structure of bamboo and rope. Without proper tools or experience the group of dilettantes and academics had created a comedy of uneven angles and sharp protrusions. But what else could they do? No one had expected the walls of the temple to be so tall, or pictogram history of the Bollue natives to be so elaborate. Weeks that had been intended for exploring the rest of the valley had been lost here as the archeologists scarped away at layer after layer of fungal overgrowth so they could record what they found beneath. It was all Greek to Abner, pictures of misshapen men worshipping a robed masked figure.

And in the end it had all been for nothing for now the temple was burning and a bloody great gorilla was carrying the voluptuous Lady Fiona Peinforte to the top of the scaffolding. "This is too damn much." Abner skirted the flames to draw closer.

All around him priceless relics of a lost culture were being consumed by flames, the rest of the archeological team was either dead or suffering from cholera. The scaffolding they had used to survey the etchings on the temple's high walls was piled high with boxes of plaster for making molds and other equipment. The monstrous ape reached the upper level of the scaffold and threw the Lady Fiona down. Her red hair fanned out behind her as she swooned with helpless terror.

The primitives that had worshipped and made virgin sacrifices here had called the ape Nodyek-Nogk. Loosely translated the name meant 'Immortal Son', they believed that the ape was a child of a god and it's blood… and other bodily fluids could confer immortality.

Abner Duggent shuddered at the memory of the rituals they had witnessed. He has seen some unspeakable things in his time…

There was a crash and Abner fell forward his vision swimming in and out of focus. He turned to see Hoskins standing over him with a hammer. Instinctively Abner reached back and ran his fingers along the base of his skull. His fingertips came back bloody. His mind reeled, this was the financier of the expedition! "My God man! What are you doing? We have to rescue the Lady Fiona!"

Hoskins shook his head, "I'm afraid not. I'm afraid the rescue party will find that I alone lived tell the tale."

"You?" Abner stiffened and then regretted it, the room rocked crazily beneath him, "You're the saboteur?"

"Yes." Hoskins smiled thinly as he advanced, "It was all too easy to frame Jobue."

"It seems I owe him an apology." Abner wished he hadn't lost his sidearm when he'd fallen off that bluff, "But why Hoskins? This discovery would have made you famous."

The older man gestured wildly with the hammer, sending flecks of blood spattering. "Since you are going to die anyway I will explain."

Somewhere up above them Lady Fiona was conscious and screaming again, she was trapped between the bloodthirsty ape and a 30 foot drop into flames. Hoskins continued speaking, oblivious to her pleas and cries, "That beast there, he is the same ape that slew the members of the 1820 Expedition."

"No not impossible. You see the mushrooms growing up along the walls of the temple, then ones that you so carelessly threw away? Their unique chemical composition actually retards the aging process, in some cases halting it entirely."

"Insanity and superstition. I thought you British were so… rational." he tried to back up but the flames devouring the walls licked at him, blackening his clothes and skin.

"I thought so myself so I had Wilkins double check my findings, before I killed him."

"So, you've been picking us all off one by one so you could get the credit for this miraculous discovery when you reveal it to the world."

Hoskin's laughed heartily "Bugger the rest of the world Degget! I've been killing you all so I can LIVE FOREVER!!!!"

"That was my second guess." Abner said as he shifted trying to keep the smoke and pain from obscuring his vision.

A horrified scream filled the air, punctuated by a crisp tearing sound. A scrap of Lady Fiona's dress fluttered down between them. Hoskins caught the fabric with his free hand and leered at it, "I see that being over a century old has not dimmed the great Nodyek-Nogk's appetite for virgins."

"Look…" Abner said, "You've got what you want, just let the girl go. She's done nothing to you."

Hoskins threw back his head for a hearty laugh, "You are a hopeless fool Deggent!"

That was when Abner made his move, tearing a loose section of the wall loose and brandishing the burning length of teakwood as a makeshift club. The blow connected with the side of Hoskins skull. Abner felt the shock of the impact reverberate up his arm. The bloody hammer clattered to the floor. Hoskins fell back, lost in a curtain of smoke.

Abner held his ground, ready for a second attack. His eyes were watering, his thick muscles were taught and ready. Abner cursed himself a fool, the bastard had played him expertly, it all made sense now.

Abner realized he owed their native guide Jobue more than an apology, he should never have tried to beat a confession out of the man.

Fresh tearing and screams roused Abner from his thoughts, handfuls of lace and silk drifted lazily through the silk. He dropped the board and started climbing up the scaffolding. Abner wondered how many more layers of petticoats the Lady Fiona could stand to loose before the immortal ape realized that she was no virgin.

The first level of the scaffolding was ten feet off the ground, it pitched and shifted under Abners feet like a funhouse ride. The gorilla looked up from sniffing at Lady Fiona's corset to bellow a challenge saw him and beat its chest.

For lack of anything better to do, Abner roared back and beat his own chest.

Nodyek-Nogk seemed taken back by this. Abner took advantage this and began to clamber up to the second level of the scaffolding. His whipcord tight frame was soaked with sweat, a trail of blood had run it's way down from the back of his head to stain his shirt. Smoke and exhaustion snatched the breath from his lungs. For a moment all he could do was hang there from a bamboo support rod and watch the flames devour the pictograms even as they illuminated them.

And wasn't it odd that one of the pictograms seemed to depict a man ascending a network of lattices? Wasn't there a demon poised at the top structure? Abner blinked trying to clear his vision, when he opened his eyes again the pictograms were lost.

Lady Fiona screamed "Abner look out!"
Startled to motion again he threw himself to one side as debris rained past him. The gorilla was throwing whatever it could, crates, cameras and barrels.

Ordinarily Abner would have waited for his adversary to run out of ammo but the fire had reached the scaffolding and already the bamboo was crackling and groaning.

There was a pause, he could hear the gorilla shuffling around above him. Panic and lust left the beast uncertain, it growled and stomped. The Lady Fiona was sobbing demurely.  Abner waited until Nodyek-Nogk had trudged past before he leapt to action.

Only to crash back down to the hard bamboo surface of the scaffolding's second level. He looked down to see what had hold of his ankle.

It was Hoskins, his face a mask of blood and burnt flesh, he was cursing and screaming. Abner kicked at him but he refused to let go. He was dragging the rugged adventurer back down off the scaffolding into the fiery ruin that was the temple's lower levels.

Fingers scrabbling at the worn bamboo Abner managed find a handhold. He looked down to see Hopkins half on half off the scaffolding, he had Abner's boot in a deathgrip. Above them the gorilla plodded heavily back to the Lady Fiona. Abner tried to shift to a better position, only to have his free leg catch on one of the vertical support beams.

And then he realized what he had to do.

Drawing back with all his might he kicked at the support beam. The scaffolding rocked like a ship in stormy waters. Hoskins and Nodyek-Nogk shared almost identical grunts of confusion.

Abner kicked again. The support snapped in two. One half of the scaffolding's uppermost level shuddered and collapsed onto the second- crushing Hoskins and sending the gorilla tumbling into the flames.

"Help me!" the Lady Fiona screamed.

"Almost there!" Abner called back as he pried the dead man's fingers from his boot. With that done it was relatively easy to help the terrified woman down and escape the burning temple.

When they were clear of the structure they collapsed into each other's arms. "Oh Abner." She buried her head in his chest, "It was terrible to be at the mercy of some lusting beast…"

"It's over now." He said has he ran her fingers through her long red hair. They both fell back into the long grass and Abner wove a trail of kisses down from her lips to the crook of her neck. His touch glanced over her exposed midriff. She pulled at the tattered remains of his shirt, all but tearing it off his back.

They entwined together, so lost in each other's touch that they were oblivious to the approach of the vengeful Bollue tribesmen.
at February 16, 2022

Email ThisBlogThis!Share to TwitterShare to FacebookShare to Pinterest
Labels: Eden Studios, my fiction