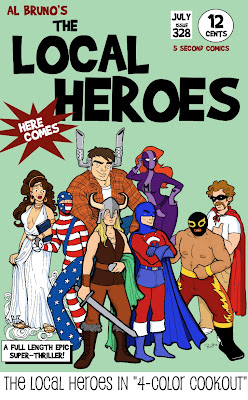 It was such a rare thing for the entire team to be together at the same time that the Local Heroes almost came to look forward to global crises. Not that any of the low-powered defenders of River City were ever called upon at times like this but since most citizens and criminals were hiding in their homes it was as good a time for a rooftop cookout.

“Now tell me again who is invading?” displaced luchador Fuego asked as worked the grill. He had once been a champion wrestler but satanic mobsters had robbed him of his title. Because of this he has vowed to wear his mask at all times until he was reinstated - he also refused to wear a shirt but that was more of a lifestyle choice.

“The Quablidoids,” Rusty Johnson, cyborg redneck pointed across the river. “You can tell by the honeycomb shape.” Years ago Rusty had been in a terrible accident, a passing group of friendly aliens saved his life but their unfamiliarity with human physiology had led them to combine parts of his body with parts of his beloved monster truck. The experience, and the resulting series of interplanetary malpractice lawsuits made him the team's expert in all matters of an intergalactic nature.

The cookout was taking place atop the town's second tallest building, a parking garage. From there they had a perfect view of the battle taking place over the night-darkened skies of Megalopolis City. Blasts of laser fire and heat vision flashed though the air like fireworks.

“Oooooo.” Hrothgar the Viking gaped at a particularly lovely explosion of antimatter, his sword in one hand a chili dog in the other. The heroic berserker could only escape from Valhalla so long as he kept his hand on the pommel of his magic blade, if he let go of the blade for more than a few seconds he switched places again with his mild mannered ancestor. While he was a nice enough fellow the team rarely needed the assistance of an asthmatic DMV employee.

Another explosion, another Quablidoid saucer careened wildly and crashed into the Hallenbeck River.

The Maven, Psychotic Kid and Amazing Ed watched the battle with high-powered binoculars while chewing on hamburgers. “Ok who is the new kid over there?” the Maven asked. She was slender and wore a dark purple costume and full face mask. She had to pull the face mask up to her nose so she could eat her hamburger. She was one of the world's greatest detectives and occasionally worked as a consultant for the more notable and powerful superheroes, mostly because beings that could change the course of mighty rivers rarely knew how to solve a murder mystery.

“Which one?”Amazing Ed asked. His costume was a pair of khaki pants, a dime store Lone Ranger mask and a T-Shirt was an 'A' hastily scrawled on it with magic marker. His only known power was his boundless enthusiasm in the face of horrible and regular beatings.

Psychotic Kid wore a ninja outfit made from an American flag and his voice was a constant snarl; some said he sounded like Clint Eastwood with hemorrhoids but never ever to his face. “He applied to be a part of our team,” he said, “The Captain wouldn't have it.”

“Of course not.” Captain Hero said. He was the teams leader and he stood on the ledge of the parking garage, his hands on his hips and his cape billowing, He never wavered in his fervor to defend liberty and the American way, he also made one Hell of a potato salad, “Heroes with fire powers set a dangerous example for the youth of today.”

The Maven gave a little groan, “You have got to be kidding me.”

“I never kid when it comes to the youth of today.”

Fuego looked up from the grill, “Who wants cheeseburgers?”

“Me! Me!” said the woman wearing diaphanous robes and hovering about an inch off the ground. She was Erato, a minor goddess that dabbled in crime fighting and writing smutty novels. The Local Heroes only called upon her in the direst of circumstances mostly because the theological implications of her existence made some members of the team profoundly uncomfortable.

The Maven scanned the aerial battlefield and then stopped, she focused and re-focused her binoculars, “There’s Mighty Woman!”

Psychotic Kid snorted dismissively, “I hear all her powers come from her golden armor.”

“Commander Infinity doesn’t need to use special armor to change the course of mighty rivers.”

Rusty Johnson spoke with a mouthful of potato salad, “Yeah, and we all know how the EPA reacted to that.”

“It’s sexism,” the Maven commented, “no one wonders were Commander Infinity gets his powers from.”

“Well what else are we going to talk about when it comes to her?” Psychotic Kid said, “She doesn’t even have a rogues gallery. The number of villains out to kill you is directly proportional your awesomeness. Even Hrothgar has an evil nemesis.”

The viking glared at the ninja, “Are you mocking my blood feud with the Wal Mart legal department? That greeter scoffed at my helmet I tell you.”

“He put a smiley sticker on it for God’s sake.”

Amazing Ed sighed wistfully, “It makes you wonder doesn’t it? Here we are eating and bickering while greater beings decide our fate.”

Erato smiled, “That would have been more impressive if you didn’t have mustard all down the front of your spandex.”

The Local Heroes were all so busy laughing that no one noticed the Quablidoid mothership sounding the call to retreat.
at February 17, 2022