MY FICTION: The Way Of The Ninja 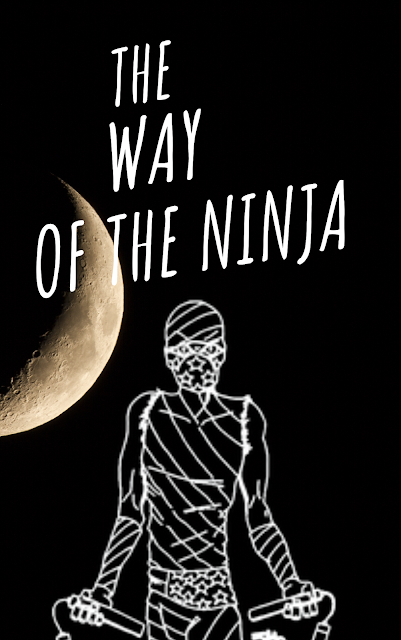 The Way Of the Ninja
by
Al Bruno III

The headquarters of Overseas Imports is the tallest structure in River City’s business district. Twenty-four stories high it looms over the stunted, rundown buildings that surround it. At this hour the tower glass and steel is the only source of illumination for several blocks. Its reflection skitters and dances across the surface of the Hallenbeck River.
A masked man dressed in shades of red white and blue scaled the building's sleek, gleaming walls. The handholds he used were imperceptible to normal sight and touch but years of training had left the hero known as the Psychotic Kid with preternaturally sharp senses.
This was the way of the ninja.
The penthouse office was dark. The Psychotic Kid clung to the wall with one hand and traced patterns on the window glass searching for the weakest point.
A breeze shifted him slightly. Hanging by one arm was dangerous even at the best of times and tonight he was more tired and almost blind with anger. The Psychotic Kid ignored these things, he had been taught to ignore exhaustion, pain and the need for regular restroom visits. His body was an instrument of his will and his mind, not a prison for it.
This was the way of the ninja.
Once he had found the weakest point found he tapped it a single time and the glass on the window and the glass pane simply fell away leaving the penthouse exposed to the night air.
Psychotic Kid back flipped into the office and landed on the mahogany desk sending papers flying. He was ready for anything but for a moment the framed motivational posters of kittens and cute sayings confounded him.
“I figured it would be you,” a voice spoke.
“Another witness is dead.” the costumed hero’s voice was a snarl, but then again it was always a snarl, “You think you’re gonna get away with this?”
The lights flickered on. A broad shouldered man glared from across the room; his suit was expensive, his hair dark and thinning. His eyes were bulging and black, each one twitched independently of the other. “I was here in my office the entire time this tragic yet amusing turn of events took place,” he said, “I have witnesses.”
“Oh sure,” Psychotic Kid said. This man always had an alibi but he was responsible nonetheless; Johnny Crawdad practically ran River City these days, “But it was you. I know the truth.”
“The truth?” Crawdad chuckled, “The truth is that no goofball in American flag pajamas is gonna bring me down.”
With a snap of his fingers thugs came streaming out of a hidden doorway looking to Psychotic Kid like a tidal wave of blunt weapons and bad haircuts.
A pair of thugs threw themselves against the desk shoving it out the hole where the window had been but Psychotic Kid had already backflipped away. He had seen their intent in their eyes and read it, read it in the way they had moved.
This was the way of the ninja.
Psychotic Kid came to a stop in the middle of the room. The thugs surrounded him. One swung a blackjack at his head. Another tried to hit him in the kidneys. A third swung a crowbar at the back of his legs.
The hero in red, white and blue twisted in place letting each attack flow around him. One thug fell with an injury to his head. One thug was knocked face first onto the carpet. A third was rocking on the floor clutching his broken knee with his hands. It was as though Psychotic Kid had never been there at all.
This was the way of the ninja.
One of his adversities threw a knife. Psychotic Kid heard the air whistling around the blade and caught it by the tip.
The last two more were coming now, each rushing him from the opposite side.
Still holding the knife Psychotic Kid leapt into the air. The spinning kick brought the first one down, an elbow to the face left the other staggering in place with a dazed expression.
Psychotic Kid pushed him over and rounded on the knife thrower, “Get outta here.”
And he did.
“This doesn’t change anything,” Johnny Crawdad said as he glared at what was left of his best men, “the DA’s got nothing. You Local Heroes got nothing. Nobody in the Shellfish gang is going to prison.”
Psychotic Kid was motionless, “Will too.”
“Yeah, and how many people are you gonna let get killed to do that?” Johnny Crawdad laughed, “Unless you’re willing to be a man and use that knife I’ll always win.”
The costumed crimefighter threw the blade, it crashed through one of the ‘Hang In There!’ posters and buried itself deep in the wall. Psychotic Kid might have been trained to kill but he wouldn’t take a life. That was a vow he would never break.
Johnny Crawdad’s cellphone began to ring.
“Better get that,” Psychotic Kid said.
His black eyes filled with suspicion but he took the call, “Yeah? ...what? ....when?”
“Something wrong?” Psychotic Kid couldn’t have kept the glee from his voice if he wanted to.
“My house is on fire...” the cell phone slipped from Johnny Crawdad’s hand, “...you set my house on fire!”
“I was here in your office the entire time this tragic yet amusing turn of events took place,” Psychotic Kid replied, “I have witnesses.”
Screaming like a madman Johnny Crawdad pulled the revolver from his jacket and fired but the penthouse office was empty.
Riding his grapple line across the street the masked man dressed in shades of red white and blue listened to Johnny Crawdad call him a dirty, sneaky, son of a bitch.
And Psychotic Kid had to laugh for this too was the way of the ninja.