The Nick Of Time (and other abrasions): The Chosen and The Damned


The Nick Of Time
(and other abrasions) 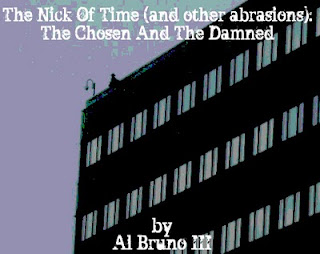 The Chosen and The Damned
by
Al Bruno III

It was dusk. Jeff Hayes stared down the sights trying not to shiver from the cold, trying to control his breathing like he had been taught. Wet snow was falling, soaking through his jacket and making the rooftop a maze of puddles. It would just be a little while longer before the girl stepped out of her front door to head for the bus stop, maybe forty minutes to an hour, and when she did Jeff Hayes would do shoot her dead.

“How old are you?” the stranger asked.

“Fourteen,” Jeff said. Water had dripped down between his eye and the scope blurring his vision until he blinked it away. His father had warned him that if anyone saw him up on the rooftop he was to drop the rifle and run, Reverend Ferdman had stressed the exact same thing but Jeff stayed in his place and let the stranger talk. There was something both relaxing and familiar about the man.

“I brought soup,” the stranger said. “Do you want soup?”

There was the sound of a thermos being opened and then a warm, meaty smell reached Jeff's nose, “I can't now.”

The stranger slurped audibly, “As you will. This person you're going to kill-”

“How do you know I'm going to kill someone?” Jeff turned to glance at the stranger, he was no taller than Jeff was but his face was old and his dark eyes seemed even older, he wore a leather jacket and a weatherbeaten blue fedora.

The stranger smiled, “Magwier, Jason Magwier. Now who was this girl you're going to kill again?”

“Her name is Janice.” Jeff's throat tightened a little at the name, he turned his attention back to starting down the scope and tightened his hands around the reassuring solidity of the rifle, of his father's rifle.

“Her father is a doctor that kills babies,” Jeff tried to recapture the anger he had felt when he had first learned the news but he couldn't.

“So you're going to kill her?”

“The sins of the father will be visited upon the son a thousand times. Reverend Ferdman said that means daughters too.”

A light flicked on in the house, Jeff angled the scope so he could watch the Tillman family go through their morning routines.

“How do you know what she looks like? What if you kill the wrong person?”

“I know who she is.” Jeff said, he could hear the stranger pouring himself another cup of soup, “We used to go to school together... back when I was still going to school. The Reverend said it was better we learned at home.”

Leaving school had been hard but Jeff's father felt they spent to much time filling him up with facts instead of faith. It had hurt to know he could never see his friends again but Jeff mourned them in secret. Reverend Ferdman was always warning his flock against earthly attachments that even loving your children too much was a kind of idolatry.

“Oh,” Magwier slurped another mouthful of soup, “This reverend sounds like a fascinating fellow.”

“He said the Holy Spirit moved through him.”

“He would call you up to the altar and touch you on the forehead so the Spirit would go out of him and into you. Usually you faint or have visions but only the Chosen get to go up to the altar, only the ones that have been saved by my Lord Jesus Christ.”

“Back in school I was always chosen last. Makes you wonder doesn't it?” Magwier got to his feet and began to pace in little circles, “If you can be chosen for redemption can you be chosen to join the damned? Is it even our choice at all? Some would say that it's all part of God's plan but if that's the case then that means that some people are going to be damned no matter what they do.”

“You volunteered to kill this girl?”

The snow was falling faster, the flakes getting thicker and wetter as the sky brightened. Magwier tried to get the lid back on the thermos but it wouldn't go, finally he threw it down into the alley, “...never liked that one anyway.”

More lights were flicking on, Jeff moved the sights from window to window feeling sick with anticipation, “I think you should go now.”

“But I want to hear more,” Magwier returned to where he had started and saw down on the wet roof; he crossed his legs and rested his chin in his hands, “It's not that often that I get to talk to someone that had the Holy Spirit in them. Were you scared?”

“...Yes,” Jeff tightened his hands around the rifle again remembering the way it had recoiled when he first fired it, it was a heavier caliber than the one he was used to, “But my Dad was there to catch me when I fell.”

“She was my friend once.” Jeff said.

“Janice- it was the three of us, me Janice and Greg, we hung around a lot in 7th grade.”

“How long ago was that?”

“A year ago... maybe. Everything changed when we switched churches.”

“Greg's Dad was my pastor but Reverend Ferdman said he was a ravening wolf.”

“What was it like when the Holy Spirit entered you?”

Jeff looked up from the scope but kept watching the house, he could almost see the muzzle flash- the face caught in a rictus of surprise and terror. Was it the same every time? “Wait a minute… How did you know my name?”

“You said Jeff and Janice but I never told you my name.”

“Actually I said Janice and Jeff.”

“I’m am,” Magwier’s voice lilted with mischief, “what I am.”

It was getting brighter now, the streetlights were flickering off, morning traffic began to clog the streets. It was just raining now and Jeff was soaked to the skin, he felt like he was going numb inside and out. He said, “If she's good she'll go to Heaven.”

“Janice?” Magwier was lighting a cigarette it was thin and foul smelling, “Will she be with the Holy Spirit?”

“So what was it like when you felt the Holy Spirit?”

“Oh you must, how could anyone forget something like that?”

“Then tell me what you do remember.” Magwier puffed smoke.

Jeff sighed, “My Dad was holding my elbow. Everyone was singing and the Reverend was there. I couldn't breathe. I was so excited. Usually only adults can be chosen to have the Spirit in them but I was special because of what I was going to do...”

“The Reverend put his hand on my forehead.”

One of the lights in the house flicked off, Jeff readied himself, “She's coming. You have to get out of here.”

It was almost too easy this time, when he had shot his father he had been quivering and weeping, the rest of his family had been easier. Reverend Ferdman had been a wicked kind of pleasure. Jeff turned back to the Tillman house but his target was already making her way to the bus stop. Jeff considered trying to take the shot anyway but there wasn’t a clear line of sight. Better to wait, better to surrender himself to what he knew he had to do. He would make ready to slaughter sons and daughters for the guilt of their fathers lest they rose up and possessed the Earth.

With a sigh of resignation he headed for the stairwell. Magwier was coughing blood as he tried to speak, his fingers clawing at the wound in his belly.

Email ThisBlogThis!Share to TwitterShare to FacebookShare to Pinterest
Labels: Dark Fantasy, Mythology In Progress, The Nick Of Time (and other abrasions)