THE LOCAL HEROES A Penny Earned 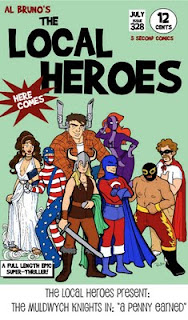 Over the years the tower in the center of the city had come to be known as the Citadel Of Champions but no one could remember whose idea it had been to do so. It hadn’t been the citizens or the municipal authorities, it hadn’t even been the team of superheroes that made it their base of operations. The name just, for lack of a better explanation, happened, but then again when it came to the city of Muldwych, England things ‘just happened’ all the time.
Perhaps it was because the city had been built on the site of a rift between worlds, or perhaps it was because the municipal park had been built over a mad druid burial ground, it even might have been because of the strange events that had caused the walls of the observatory to drip with jam.
Whatever the cause there always seemed to be something happening to keep the heroes known as the Muldwych Knights busy.
Tonight was no different. The remaining members of the Knights had been in the conference room when the Citadel’s intruder alert went wild. The three men sprang into action, showing far more enthusiasm for unknown danger than they had for this month’s budget meeting. They spread out, Dr. Hercules covered the lower levels, Grant Mandelbrot headed for the upper floors and the Acrobatic Flea searched the ground floor.
The Acrobatic Flea wore a green costume and full face mask, his oversized red goggles gleamed. He bounced from one hallway to the next until he found the intruder.
“Why is it...” he began, “...you nitwits always go right for the memorabilia room?”
The memorabilia room was where trophies from the team’s different adventures were kept under glass alongside marble statues that honored the past members of the organization. They were all represented- even Captain Hero.
The intruder casually pushed over one of the statues. It shattered. “Hey!” the Acrobatic Flea cried.
“You should be worrying about yourself,” the intruder said. She was a short woman with a mop of curly red hair. She was wearing an ankle length frilly blue dress with a white apron. She raised her left hand and the copper-colored nails of each finger extended six inches, “My name is Penny Dreadful and I’m here to kill you. I’m here to kill all of you.”
The Acrobatic Flea leapt at her, his wrist blasters firing. She spun and flipped out of the way. Penny Dreadful slashed three times at the hero, the second swipe of her nails catching him on the forearm.
“I don’t believe it!” he cried.
She grinned, her smile was crooked and ugly “Impressed?”
“No. I mean I’ve never seen a female assassin that wasn’t dressed like a stripper. I just can’t believe it.”
With that she charged him, a flurry of spin kicks, nail swipes and flashing polka-dot bloomers. The Acrobatic Flea leapfrogged over her and ricocheted off the wall.
Then that wall exploded outwards. Dr. Hercules PhD stormed into the room, causing the rest of the statues to topple domino style. His seven foot tall, broadly muscled physique was covered by a three-piece pinstripe suit and bowler derby. “I do not know who you are but surrender and do not be obstreperous. Obstreperousness will not be tolerated so be not obstreperous!”
“Just get her!” the Acrobatic Flea shouted, “Or I swear to God I’m gonna hide your word-a-day calendar!”
The Olympian with an honorary doctorate swung a massive arm at Penny Dreadful. She vaulted over it and raked her nails across his face drawing blood. He cried out in surprise for he had thought nothing short of an exploding shell could break his skin.
The two heroes tried to coordinate their attacks but their motions became sluggish. The Acrobatic Flea’s leaps became less and less amazing until he blundered and fell. Moments later Dr. Hercules crashed into a display case and slid down against the wall.
“What’s...” the Acrobatic Flea began.
“...happening?” Dr. Hercules finished.
“There’s a neurotoxic venom under her mithrl laced nails.” Grant Mandelbrot walked calmly into the room, “Am I right?”
Penny Dreadful turned to glare at him. Grant Mandelbrot was thin and bald, he wore jeans and a cream-colored turtleneck sweater. “The last of the team,” she smirked, “and the least.”
“Oh I wouldn’t say that,” Grant crossed his arms over his chest and smirked back.
“...oh look...” the Acrobatic Flea mumbled, “...he’s doing the smug thing...”
The assassin sprung at Grant. Before her nails could connect he burst into a cloud of shimmering powder and reformed behind her.
“How did you?” Penny Dreadful spun back to face him.
“...he became his essential saltes...” Dr. Hercules explained as he slipped in and out of consciousness.
“...and that’s saltes with an ‘e’...” the Acrobatic Flea added.
Penny Dreadful and Grant Mandelbrot drew closer. “It doesn’t matter,” she said, “I’ve brought down the best.”
“That you have,” Grant said, “you have quite the reputation.”
“Flattery?” she laughed, “Is that all you have left in your bag of tricks?”
Grant shifted into dust and floated around her in lazy circles, letting her swipe at him. He said, “One last trick.”
When he reformed again he looked different, he was stoop-shouldered, scarred and dressed in black. Penny Dreadful stopped dead in her tracks, “You? But you’re the one that hired me.”
“I had to see if your reputation was well-deserved.”
Penny Dreadful retracted her nails, “This is insane.”
“...seconded...” the Acrobatic Flea chimed in then began to snore.
“The Knights need a new fourth member,” Grant explained, “I want you on the team.”
“What?” the assassin began to leave, “You’ve wasted your time and money hero.”
“I know your heart,” Grant shifted back to his normal shape as he called after her, “I know what you’re running from.”
“Go to Hell,” she called back.
“We offer full medical coverage,” he added.
Penny Dreadful paused, one eyebrow raising, “And dental?”
at June 23, 2011