The Nick Of Time (and other abrasions): Going Out, Going In 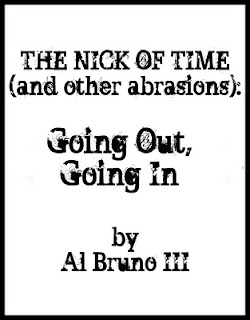 Going Out, Going In
by
Al Bruno III

“Are you going out?” the dark haired girl asked. Her name was Audra and she was wearing baggy sweatpants and an even baggier t-shirt. There were six playing cards in her right hand and she kept them close to the surface of the table. She eyed her opponents with suspicion, “You can't be going out already.”
“You'll know when I'm going out,” her roommate Judy replied. Her hair was long and yellow, her nightie was equal parts frills and solicitation. She had her cards casually fanned out and clasped to her bosom. She nudged the young man in black sitting next to her, “Your turn.”
Isaac drew another card and sighed with resignation.
The Hammond Academy strove to keep the male and female Apprentices apart in an effort to curb the tide of sexually transmitted diseases, binge drinking and assassination attempts that came with every fall semester. Despite this Isaac Yoder snuck into the girl's dormitories every Thursday after dinner, because Thursday night was canasta night.
Judy set down a group of matching cards and cackled victoriously, “You’re not so tough at this game when Lorelei isn’t there to help you. What do you think of them apples Amish boy?”
Isaac didn’t react but Audra became annoyed on his behalf, “He’s not Amish- he’s a Mennonite.”
“Big diff.”
“You only bust his chops because he’s taken a vow of silence,” Audra took another card and grinned, “finally!”
“Going out?”
“Wait and see.”
The three girls that lived in room 413- Audra DiMico, Lorelei Miller and Judy Bauer- were Isaac's only friends, the only students willing to look past the fact that once he completed his lessons he would use them to hunt and kill wielders of magic and creatures of mystery. They didn’t care that he still had years until graduation.
“Speaking of Old Leather lungs...” Judy thinned a few more cards from her hand before she went on, “...where is Lorelei off to this time?”
“You think she tells me anything?” Audra commented, “I’m just her best friend.”
A pair of electric lamps filled the room with pale sickly light, the card players were huddled around a three-legged folding table. The room had only one window and that was square-shaped and barred, it’s frosted glass made a smear of the night sky. Isaac studied his cards, occasionally stealing a glance at Judy. Over the last few months he had become an expert at stealing glances at her. The trick was never to look for too long and never to glance at everything. Sometimes he would taken in the curve of her chin, at other times the color of her hair, sometimes it was they way the skin of her legs would rise up in gooseflesh when she had a winning hand. Alone in his room he would add those glimpses together, assembling them like the pieces of a puzzle until he had an image of her in his mind.
In those half-dreams he would speak to her in a voice he barely remembered.
Judy smirked, “Is she off on another adventure with her stalker?”
“His name is Magwier,” Audra laid another handful of cards down.
“He’s her crazy stalker,” Judy said, “and she’s crazy for sleeping with him.”
Audra frowned, “He’s not a stalker, he just follows her around everywhere.”
There was a loud knock on the door. The two girls looked up in alarm but Isaac was already heading into the bathroom. With the door closed behind him he pressed his ear to the wood.
“Oh,” he heard Judy through the door, “why hello Dean Beardsley. What brings you here at this hour?”
Isaac was still holding the cards from his last hand; someday he would be forbidden to play games of chance, but he had years until graduation. He pocketed the minor suits and red queen.
“A message came through via the telegraph,” Beardsley’s voice was thick and wet, “we have spoken to you girls about this. The telegraph is for administrator use only.”
“I’m sorry sir,” Audra said, “it won’t happen again.”
“Indeed,” the Dean said. A moment later Isaac heard the door close and Judy gave the all clear.
There was scrap of paper in Audra’s hand, it was a chaos of dots and dashes but it wasn’t Morse code. It was something the girls in room 413 had worked out for themselves.
“Well, what is it?” Judy asked.
“It’s Lorelei and Magwier. They need my help, they’re sending me on a mission,” Audra preened at the word mission.
Judy frowned, “You don’t have to help them.”
“I want to. They need to me go to Route d'Abbaye.”
“Fine then,” Judy put her arm through Isaac’s, “they we go with you.”
The dark haired girl became a flurry of activity, she was changing her clothes oblivious to the boy in her room, “She said you have to stay here.”
“Screw what she says.”
Audra pocketed her Mojo bag and shook her head, “You don’t understand. Someone is killing members of the Lunt family.”
Gooseflesh ran down Judy’s legs, “I’m not a Lunt.”
“Your stepmother is.” Audra called as she was halfway out the door, “Watch after her Isaac.”
He nodded as Audra slammed the door behind her. Judy threw her cards down in disgust. Isaac saw an ace of spades and another red queen. Judy still had her arm around his, she smiled slyly, “Well what are we going to do now?”
Even if he could have spoken Isaac would have known better than to waste words on a moment like this. He kissed her and undressed her with familiar ease. He gave himself over to the sweet weaknesses of the flesh.
Someday he would have to kill Judy Bauer and all of her kind. He had sworn an oath not to suffer a witch to live but not now, not yet, he still had years until graduation.
Posted by at 4/14/2011 10:36:00 PM