Two trailers for HANNIBAL the TV series show a lot of potential.

Finally were getting some answers over at THE ABADDON! 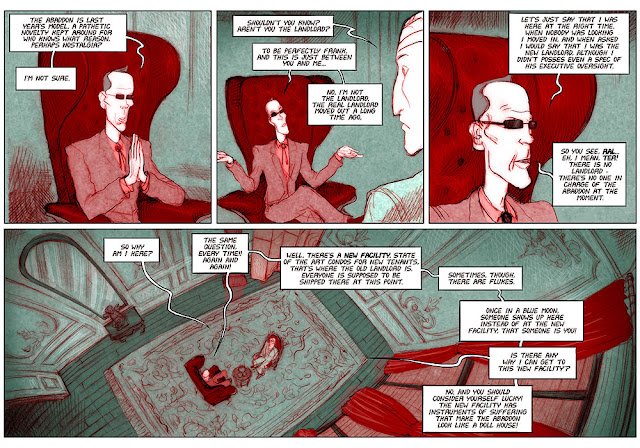 Email ThisBlogThis!Share to TwitterShare to FacebookShare to Pinterest
Labels: something strange, webcomics

And now the trailer for the awesome Wonder Woman movie that will never get made! 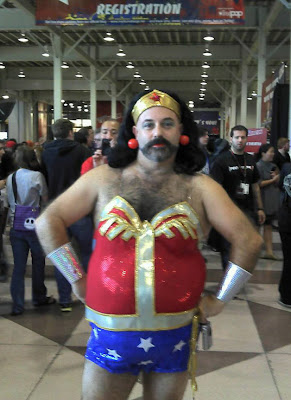 The trailer for LORD OF TEARS is a real hoot!

Email ThisBlogThis!Share to TwitterShare to FacebookShare to Pinterest
Labels: lovable links, the owls are REALLY not what they seem, trailers

THE COLD INSIDE (a serial novel) Chapter Twenty-three part one

At the Blessed Heart School Friday morning homeroom was set aside for Chapel. Chapel was held in three locations on the school campus. For the kindergarten through fourth grade it was the same room they used for story time and assemblies. The older and preteen students met in the back of the library. The high school aged students met in the actual church that was left over from the main building's previous life as a convent. It was a modest building by most standards but there were pews, an organ and stained glass windows. Some of the older nuns said that the chapel by the cemetery had been much more impressive, of course that was before it had fallen into disrepair and the roof had collapsed.

Every Chapel began and ended with a kind of generic non-offensive prayer. This was done as a kind of halfway point between the school's fervent belief in an all powerful and all loving God and the realization that at least a fourth of the students sitting in the pews came from non-Catholic families. The opening prayer was followed by a ten-minute homily delivered by Father Robert Eagle, the school Chaplain. Most of the time he instructed them on some aspect of the golden rule or spoke about how all the young men and women gathered here had to step forward to meet the challenges of the future. Tristam might have found these life lessons a little more moving if Father Eagle didn’t try to seem contemporary by peppering his sermons with slang gleaned from top 40 Hip Hop songs that he obviously barely understood.

The six members of the Magnificent Seven sat at the pew near the front. It was safer for them that way. None of them dared speak of course, speaking during Chapel got you a week's detention, but they all shared the same thoughts

Where was Drew? What had happened to her? Worry had even eclipsed Tristam’s nightmare-like memories of last night.

Half a nightmare, half a wet dream, he thought and then flinched a little. Not the nicest thought to have during Chapel. Then he remembered how little a place like this truly meant. Even ghosts were driven away from the sterility of a church.

He'd never gotten around to flying by Drew's house. His lesson had left him feeling like he was coming down with the flu. It had been worth it though; he had never performed the sexual act before with such rapaciousness. He had left both Phil and Ariel with deep bruises.

The old man had been half-admiring and half-terrified by what happened. He'd given the stripper an extra handful of bills by way of apology.

But that doesn't have anything to do with Drew does it? I have to find out what happened to her. I have to find out if she's sick or worse. Actually, if it had been worse there would have been some kind of an announcement wouldn't there?

Tristam glanced over at his friends. Warren in his too-tight pants, somehow he always found a spot where he could stare at Solana.  Yusuf sat rigidly in the pew, afraid that the slightest move might offend Allah or Father Eagle or both. Rich was either praying or sleeping. Greg and Adelphos seemed to be the only ones actually paying attention to what was being said.

Then again, Tristam considered, maybe the loss of one of us isn’t worth an announcement.

A flurry of whispers made Tristam start, it was coming from directly behind him and that could be trouble. He might get spit on or poked with something sharp. Tristam remembered how a year ago he’d scorched Warren's ass with a lighter.

Sometimes I think this bullshit is exactly what I deserve.

Except that nobody deserves this, I see that now.

The whispers became giggles and then over that Tristam heard someone making a slurping noise over and over again. He resisted the urge to turn his head and see who it was; he made himself concentrate on the stained glass windows.

The noises and giggles continued all the way through Chapel.

Ok everyone for the last time - STOP GOING OUT IN THE WOODS TO PARTY! And now the trailer for CHEMICAL PEEL...

Oh Lord! It's the trailer for HOLY GHOST PEOPLE!

MARBLE HORNETS morphs from a web series into a movie!

Popluar web series MARBLE HORNETS, whose YouTube channel has more than 250,000 subscribers with over 55 million views of its 65 episodes, has just been tapped to become a feature length horror film from production company Mosaic, Variety has reported.

Joining Mosaic on the production is Kirill Baru and John Zaozirny with James Moran, the second unit director on the past three PARANORMAL ACTIVITY films, set to direct from a script by Ian Shorr...

Email ThisBlogThis!Share to TwitterShare to FacebookShare to Pinterest
Labels: the slender man has a better career than I do