BRUTAL AS HELL schools us on THE BLIND DEAD

There have been countless undead hordes down through the years, but Amando de Ossorio’s skeletal, cowl-wearing Knights from his Blind Dead series of films have a special place in the history of the genre. Appearing in four films altogether – Tombs of the Blind Dead, Return of the Evil Dead, Horror of the Zombies and Night of the Seagulls – Ossorio’s walking corpses emerge straight out of a unique place and time in European cinema...

To get out of my depressing apartment, I went for a lot of walks and spent late hours writing in an all-night coffee shop in nearby Studio City called Tiny Naylor’s. Sometimes writing was difficult because the people-watching at Tiny’s, which unfortunately no longer exists, was so distracting. Every Wednesday evening, a group of familiar character actors – the kind of actors whose faces you recognize but whose names you don’t know – came in together. The group always included Mark Lenard, who played Spock’s father Sarek on Star Trek, and Dave Madden, who used to play Reuben Kincaid on The Partridge Family and whose distinctive voice carried throughout the restaurant whenever he was there. They were the only two whose names I immediately knew, but the group included other familiar faces from movies, TV shows and commercials. Tracy Ullman and Jodie Foster came in frequently and most trips to Tiny’s included at least one celebrity sighting. The San Fernando Valley is probably the capital of the porn industry and Tiny’s got a lot of business from people I often didn’t immediately recognize with their clothes on...

click here to visit Ray's blog and learn more about the origin of his novel and more importantly how to get a copy of your own!

Email ThisBlogThis!Share to TwitterShare to FacebookShare to Pinterest
Labels: lovable links, something cool

So there I am, sitting in the back of the taxi with the cute brunette. She keeps fiddling with the strap of her bag, and I resist the urge to put my hand on her knee. I thought I was dreaming when she came up to me by the pool. Normally I have to buy a chick a few drinks before she’s so bold. Not little Daphne. Of course, she wasn’t talking to me for her. No, she figured her mistress would like me. You know the type - shy divorcee, too scared to approach a guy herself, so gets a companion to do it for her. Well, I’ve been scamming old broads along the coast for four years - what was one more...

NOBODY MOVE has a quote from one of my childhood icons! How could I not reblog it?

"Sherman Duffy of the NEW YORK HERALD once said, 'A newspaperman is the loneliest guy on earth. Socially he ranks somewhere between a hooker and a bartender. Spiritually he stands with Galileo, because he knows the world is round.' Not that it matters much, when his editor knows its flat."

I miss you Karl! (and Darren!)

Be sure to visit NOBODY MOVE! 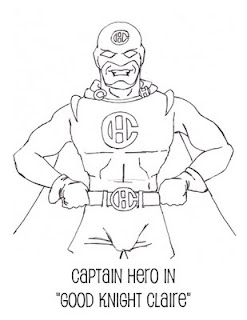 this story is dedicated to the memory of Elizabeth Sladen
The trip from the United States to England took eight hours. Bill Kane had chosen to travel coach, he kept his bag of carry on luggage in his lap the entire way. The cab ride from Heathrow airport to the city of Muldwych Point took another hour. Once he had checked in to his hotel room he removed the red and blue spandex from the secret lining of his suitcase and slowly put it on. Before he donned his mask and became Captain Hero he added a plain black armband to his costume.
*
The buildings of Muldwych Point were further apart than he had expected and it took Captain Hero half and hour to find the proper rhythm for leaping from rooftop to rooftop.
The city of Muldwych Point was famous for two things; its cheese and its superheroes. The cheese was a sharp, smoky cheddar variant made exclusively from the milk of fainting goats.
It’s superheroes were no less unusual. There were four of them and they worked together to defend England from dragons, mutants and aliens. They called themselves 'the Muldwych Knights' and there were four of them; the Acrobatic Flea, Girlizard, Dr. Hercules PhD and Grant Mandelbrot.
There were four of them... Captain Hero thought with a frown. He fired a grapple line, made sure it had caught hold of the nearby office building and swung.
He knew he was being followed but he decided to bide his time.
*
There was a tower in the center of the city. It had been built in the 1960’s to house a computerized telecommunications system. It had been abandoned a few years later after the computerized telecommunications system became sentient and tried to take over the world with giant robots.
Now it was the headquarters of the Muldwych Knights. From the ledge of a nearby apartment building Captain Hero watched the citizens standing vigil. The had surrounded the base of the tower with cards, flowers and other symbols of grief. The spectacle was as heartwarming as it was sad, it hammered home to Captain Hero the utter finality of this situation.
His years of crime-fighting had taught him that superhero deaths were like celebrity weddings- they rarely stuck, but this time felt different, terribly different. This was no hoax or imaginary story, Claire Heath aka Girlizard was dead.
A slender figure dropped onto the ledge beside Captain Hero, bounced a few times and then settled down. He wore a green costume and mask that was complimented by red boots, matching gloves and dark oversized goggles. Even though his mask covered his entire face the little antenna attached to his goggles betrayed his expressions, “If it isn't Captain Mid-life Crisis!”
“How's are you insect?” Captain Hero turned to look at the man beside him, the high-jumping super hero that called himself the Acrobatic Flea.
“Like I want to punch someone.”
“Don’t get any funny ideas,” Captain Hero said. He and the Acrobatic Flea had fought on several occasions, mainly due to misunderstandings or mind control but their last most terrible battle had been over Girlizard. This was the first time they had spoken since.
Of course we both fell for her. He thought. She was sweet and sassy and she could turn into a nine foot dinosaur.
“How are the others?” Captain Hero asked.
The Acrobatic Flea rubbed the back of his neck, “Doc Herc is acting like nothing happened and Grant... well Grant is Grant.”
“And what about you? How are you holding up?”
“I don't...” The Acrobatic Flea sighed, “...I don't know if I...”
The sound of an explosion rocked the night. The two costumed heroes looked to the Muldwych Point bank. “Speaking of holding up,” Captain Hero said.
*

The super criminal known as Black Pudding waded through the flames and wreckage. He was an obese, pink-skinned nightmare in a dark suit. He extruded tentacles at will, tearing the vault door off its hinges and tossing it casually aside.
The two masked heroes stood near the bank’s ruined entrance. Captain Hero asked as he thumbed through his utility belt, “What is that?”
“Black Pudding,” the Acrobatic Flea said, “he’s a shoggoth.”
“You don’t say?”
Black Pudding grabbed several sacks of money and absorbed them into his bulbous torso. Sirens and alarms began to fill the air. Neither crime-fighter liked to think about the chances the local authorities would have against this villain.
“Last year there was a community theater performance of Macbeth,” the Acrobatic Flea explained, “it was so bad it tore a hole in the fabric of reality and this wanker came through.”
Black Pudding turned to see the two heroes blocking his way, he roared and oozed in all directions. A gleaming black tentacle lashed out at the Acrobatic Flea but the hero was already leaping through the air, his wrist blasters firing.
Since the Acrobatic Flea was going high Captain Hero went low tossing a handful of concussion grenades at Black Pudding’s feet.
The attacks splattered parts of the shoggoth in all directions. In his rage he began tearing the bank down around himself- and the heroes.
Bounding through the flying wreckage the Acrobatic flea pulled the other crime-fighter back out into the street.
“Something tells me-” Captain Hero coughed, “-we’re going to be late for the wake.”
“You know,” the Acrobatic Flea adjusted his wrist blasters again, “I loved her man. Really loved her.”
“I know,” Captain Hero said, “I did too.”
Black Pudding burst out of the wreckage his body swollen and bristling with limbs, tendrils and mouths. He was making all the standard threats but neither of his adversaries paid attention.
“I wonder what she would say,” Captain Hero mused, “if she could see us working together.”
The Acrobatic Flea chuckled, “I think she’d say something like- ‘Kick his ass boys.’”
Laughing they charged into battle once more.
Posted by at 4/21/2011 09:45:00 PM 8 comments:

Rest In Peace to one of my favorite Frankenstein monsters

Just found out via BLACK HOLE REVIEWS that actor Michael Sarrazin passed away. He starred in the miniseries FRANTKENSTEIN THE TRUE STORY. A mini series that had nothing to do with the actual plot of the book but as a kid (and even an adult) I really enjoyed the take on the story. Mr. Sarrazin did a great job as the monster, a performance I still remember.

(Insane News) Ironing On The Expressway... what more can I say?

This article found via FARK.com

It brings new meaning to going 'flat out' on the motorway. A man wearing a blue dressing gown and slippers made the bizarre decision to do a spot of extreme ironing in the central lane of the M1 this morning....

Click here to read the rest at THE DAILY MAIL

And now a musical interlude courtesy of HEROPRESS!

Be sure to visit the Acrobatic Flea's blog because he is a hopeless romantic.

The movie does start formulaically with a group of teens and their broken down car. One goes up the road to get help (never to return) and the others soon run into Mr. Slausen (Chuck Connors), proprietor of Slausen’s Lost Oasis, a wax museum. The stranded teens (including futureThat 70’s Show MILF Tanya Roberts) hitch a ride with Slausen back to his place. While the group’s lone guy, Jerry (John Van Ness) and Slausen head back to try to fix the car, three girls are left at the Oasis and warned not to venture out due to coyotes. The real danger is Davey. As the girls start to venture out exploring the creepy old house behind Slausen’s tourist trap, they soon encounter the doll faced Davey and his telekinetically powered killer mannequins. The girls as soon picked down to one, the sweet and wholesome Molly (Jocelyn Jones) who discovers the true nature of the slasher’s secret...

(Recommended Webcomic) THE ABADDON reveals that Hell is for roommates.