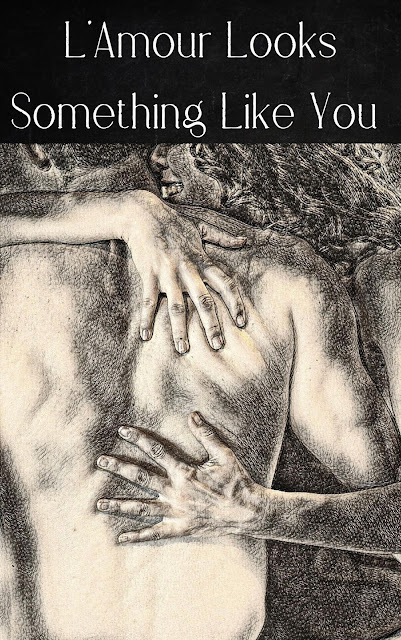 The bed was too small, the room was too warm and her clothes were too tight but in a matter of moments one of those problems would be solved for her. Kate felt his hands snake up along her back and take hold of the zipper on the back of her black dress.

She couldn’t believe she was doing this! He was half her age, half her age and beautiful. He still lived with his parents but he was undressing her like an old pro.

The dress fell away and Kate felt a flush of uncertainty, these weren’t the perky breasts of a college hottie, these weren’t the hips of a girl flush with the promise of youth. Her shape was still lovely enough to catch a man’s eye but she knew her body had been marked by the passage of time; there were stretch marks and over a tattoo that had seemed like such a good idea at the time.

What would she do if he flinched away from the sight of her? She would die, she would just die.

He didn’t look away and a little smile pulled at the corners of his mouth, an appreciative smile. Then he was pulling her close and closer still.

There was stubble on his chin, his breath smelled like gum and his kisses were like candy. His name was

Robbie. He was a valet and he had flirted with her as she dropped off her car and headed into the grand old hotel for the wedding reception. She was sure he gave the eye to all the middle aged broads that crossed his path, but he’d walked off the job to be with her hadn't he? Walked off the job with a breezy laugh of “They won't fire me.”

What was it her old friend Debbie had said about cougars and cubs? Debbie was always one for smutty little remarks. She’d even made them when she was in hospice, trying to make the orderlies blush while she’s still had the strength to speak.

What would Debbie say if she could see her now?

Robbie had stripped Kate down to her plain cotton underwear. The panties of a woman with no expectations. His touch skirted the old scar that marked the place where the doctors had gone in to remove her cancerous womb. Did he know what that scar meant? Or was he too busy kissing just below her navel and working his way down?

In spite of everything Kate giggled when those kisses reached their goal and he made himself busy. No one had done that in a while!

Or with such thoroughness.

It had been the wedding of a daughter of an old acquaintance, someone she had lost touch with since college and then found again thanks to the dubious miracle of Facebook. Kate decided to go on a whim, thinking it might be fun to see her old home town again. To see what had changed and what hadn’t. Maybe she would even rekindle an old friendship or two.

She had avoided the actual ceremony however, wedding ceremonies left a bad taste in her mouth. She had been burned twice and that was enough, the only thing more expensive than her weddings had been her divorces.

Now it was her turn to undress him. The terrain of his body was familiar but there were surprises. A pierced nipple, washboard abs and he was more than a handful in all the right places; and he was ready to go! No purple pills and pregnant pauses here.

There was a word she didn’t like crossing her mind. Especially considering what she had lost at such a young age, even more so when she realized who else was at the reception.

Of course she should have guessed. Hadn’t the invitation come from an old and mutual friend? Kate was civil enough when Scott her old fiancee called out her name and told her it was long time no see. He hugged her in a way that showed he still didn’t have the slightest idea how much he had hurt her way back when.

He had smiled and told her she hadn’t changed a bit. He bragged that he was the manager of this hotel and he had charged the bride’s family half price for the affair. Then he had introduced his wife and offered to show her his wallet full of kids. The need for those kids was the reason he had left her within months after the hysterectomy.

It was a clumsy move but she had excused herself by pretending her cell phone was on vibrate and there was an important call coming in. She made a show of talking

to someone that wasn't there and made as dignified a run for the exit as she could.

She hadn’t even known that she was crying until the handsome valet had asked her if she was all right. This was not the distracted concern of a well- trained employee but the tentative reaching out of a would-be friend. Ordinarily she would never have gone off with some stranger but Kate already felt like she knew him.

It had been good to have someone to talk to, better than good, they found a booth in a little diner and talked for hours.

And now here she was holding him while he made love to her, running her nails along his wide back until he shivered. When she climaxed she cried out blissfully, carelessly.

That cry brought Robbie's parents running into the room. Covering herself quickly Kate said the only thing she could think of, “Hi Scott, long time no see...”