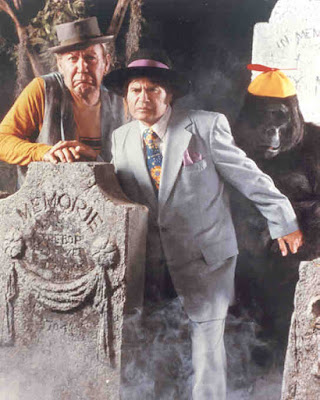 So, first things first: credit Filmation’s The Ghost Busters for devising first the very premise of the 1984 blockbuster of (almost) the same name.

As is the case in Ghostbusters starring Bill Murray, The Ghost Busters involves hapless paranormal investigators who use technological means to bumble through the capture of supernatural villains.

But man, The Ghost Busters is damn weird. ### It stars past-their prime F-Troop (1965-1967) stars Larry Storch and Forest Tucker as the ghost busters, but they team with a gorilla, Tracy. And when I say gorilla, I mean a man in a gorilla suit (Bob Burns).

Why a gorilla companion? Well, why a talking chimpanzee in Filmation’s Ark II? In the Saturday morning program of the 1970s, these things just happen, I guess you could say.

Maybe an attempt to capture the Planet of the Apes demographic?

The Ghost Busters (1975) ran for fifteen episodes, and features cornball humor. One episode labors over the difference between a “stake” and a “steak,” in regards to vampire-hunting tools. And the theme song, as you can play in video form above, features Storch and Tucker warbling out a terrible tune.

Email ThisBlogThis!Share to TwitterShare to FacebookShare to Pinterest
Labels: flashbak, recommended article, who ya gonna call?