In The Shadow Of His Nemesis chapter thirty four 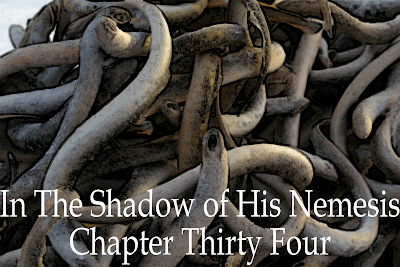 “Really?” Jack said, “What about you and your cousin Tess?”

“She was my third cousin- not my sister or anything like that.”

Roxanne explained, “Well when you get right down to it the Lunts are a family of cousins. It was decided long ago that intermarrying would be the best way to keep the bloodline pure and our gifts undiluted.”

“If you say so,” Warren coughed a little, his eyes were still watering.

Isobel poured herself a little more wine, “Well did you... you know?”

“Hell yes,” Roxanne said, “I was sixteen years old and on the verge of an arranged marriage, I needed to feel like I was in control of something. But we had to be careful. If we got caught it would be off to the basement for Chadwick.”

“And the basement would be bad right?”

“Oh very,” Magwier said. He had gotten out of his seat and was busying himself straightening the pictures on the wall, “The Lunt family basements are kept flooded- all the better for the breeding of their precious ǽlfix.”

The candles were dwindling along with everyone’s energy, the poor light, the wine and the lateness of the hour gave everything a dream-like quality. Roxanne continued, “So I wasn't a virgin on my wedding night but thankfully my new husband was close to seventy and easily distracted. I guess all men are if a girls' got the right distractions.

“About a month after my honeymoon came my first night as an Oracle. They lay you out on this soft bed and you wear a ceremonial gown that would make a Vegas showgirl blush. The Lunt men surround you with their little notepads but some of them use tape recorders nowadays so they don’t miss anything.

“They prepare the Gemætan and the first time you hear the wormy things sobbing you want to just call the whole thing off but there’s no turning back.”

Roxanne scanned from one end of the table to the other, almost preening at being the center of attention. “They give you a cupful of the stuff,” she explained. “The cup is wooden- more tradition and ceremony- and it tastes like drinking spoiled milk when you have a bad nosebleed. Most girls throw up a little the first time but you always get enough of the stuff in your system for the visions to begin.

“My first vision wasn’t of some great mystical truth or mystery, it was of Chadwick. I saw him as an old man, fat and ruined looking- he was kneeling before a wall of masks. He looked… so alone. That’s what I saw but what I said didn’t match up with it at all, the men said that all I talked about was the Hierophant and the Forest of Doors.”

Magwier turned back from his picture straightening, “The Hierophant?”

“Yes, that was one of the things that sent the menfolk scrambling to their books. It's especially important for the males to be familiar with religious texts and certain sources of arcane knowledge. We supposedly have the sole original remaining copy of Boken av Drömmar och Damm. In fact we have one branch of the family that spends most of its time copying the text exactly down to each detail.”

“What not just photocopy it?” Isobel asked.

“Roxanne shook her head, “Photocopies and things like that don’t work, they just don’t come out. While all this was happening to me they had sent Chadwick away to complete his studies. He never came back. It happens a lot really, there's a whole big wide world out there after all. One of the Lunts actually runs a summer camp if you can imagine that?

“It was years later when I got a package in the mail with no return address. It was a handwritten manuscript called Vizards and Veils: The Transformative Evolution of Masks. There was a note attached telling me to read it and then find him.”

“Excuse me,” Warren asked, he was on his sixth glass of wine and his speech was getting slurred, “But if he didn't leave you an address how were you supposed to find him.”

“Chadwick also wanted me to bring him some ǽlfix eggs,” Roxanne said, “So I stole some. It wasn't as easy all that really, I had to stab a squonk to get out the door. Of course that meant there was no going back for me, but I decided Chadwick was worth it.

“I found my brother in the midwest living in a big house with no furniture. It turned out my brother had been playing at oracles. He had six very ordinary girls wrapped around his finger and they couldn't wait to have a vision or two. He told me over a dinner of cold pizza and warm beer that he’d been snatching bits of Gemætan here and there for his personal use from other branches of the Lunt family. I told him he was lucky not to have been caught and killed but he just laughed and said something about the blessings of Iadalboth.”

Magwier made a tiny squeak at the name but tried to cover it by clearing his throat. Isobel and Galen shared a shrug of the shoulders. Warren kept trying to refill his wineglass only to have Hao snatch it away. Angie was fast asleep on Sig's shoulder and he couldn't be happier for it. Zeth, Jack and Bodivar seemed to be listening intently, but Bodivar was slowly twirling a butterknife between his fingers and Zeth kept glancing Magwier's way.

“All through that dinner my brother kept making these remarks about women being the weaker sex and that our visions were tainted by our lack of clear thought. I offered to be his oracle but he told me he needed these girls because they had none of the Lunt family indoctrinations,” Roxanne frowned, “Oracle or not, I was surprised when a few days later when he and his harem skipped town leaving me behind to make a life for myself.”

“Respectfully,” Zeth began, “What was the point of that story?”

“I leaned what it feels like to have wine come out your nose.” Warren said.

Email ThisBlogThis!Share to TwitterShare to FacebookShare to Pinterest
Labels: Dark Fantasy, Horror, In The Shadow Of His Nemesis, Mythology In Progress