In The Shadow Of His Nemesis chapter thirty two 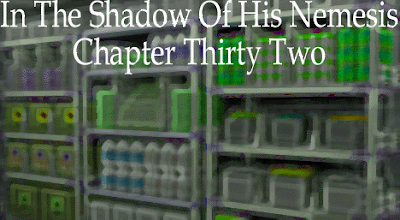 The cold air sent a shiver of clear mindedness through Warren, he watched his breaths come out in little puffs. It was colder here than it was outside but he didn't hear the whir of a single fan or refrigeration unit. Just another one of the mysteries of his new home.

“Where are we supposed to look?” Warren asked.

Hao gestured with the candle holder “I’m not sure, the ice cream is around here somewhere.”

“If you say so.” Warren said. This was the second time he had been to Laurel House's larder- that was what Jack called it- a weird name that Warren associated with old British TV shows and movies. The larder was bigger than any of the rooms he had visited, bigger than his room, bigger than the library, bigger than the solarium. It was crowded with rows of shelves that were packed tight every kind of perishable food he could imagine. There was apparently another ‘larder’ somewhere nearby that had dry goods and candies.

Must be one Hell of a grocery bill. Warren thought. Actually I wonder where they get this stuff. They can't exactly get deliveries and I can't see Sig wandering back from town with a backpack full of frozen roasts.

Still though it was a funny thought.

“Any luck?” Hao called to him. The candlelight had rendered her into a silhouette. It was a Hell of a nice silhouette for a woman in her forties.

“Not yet.” Warren turned his attention back to the shelves. He found himself staring at a bunch of chickens; it looked like a whole coop had gotten the chop. Near that were steaks and roasts- it was like something straight out of a grocery store. Except there was no plastic packaging or price tags anywhere to be seen.

Is there a farm or something nearby? Warren wondered and then immediately dismissed the idea. If they had been doing business with a farm then they might have something other than that generic looking powdered milk to use in their cocoa.

“Do you really think you deserve the things that happened to you?”

“What?” Warren almost didn't realize what she'd said. He was too busy staring at an entire shelf of frozen bread. What kind of lunatic froze bread?

“I said do you really think you deserve what happened to you?”

Warren almost ran the hand with missing fingers through his hair, “I don't think that.”

“You sure? That's the way you sound.”

“Do I?” Warren started to run his ruined hand through his hair again.

“I’m not sure...” was it the candlelight or the five glasses of wine that made it so hard to gage her expression?

“Galen's people, and Sig’s, are called the Vlodek. They took my mother from her family. They made her breeding stock. Four children and three miscarriages later she died giving birth to me,” after a moment's pause Hao put the candleholder down on a nearby shelf, “I was sold to the Culann family.”

“They trained me, taught the incantations of a sorceress and the talents of a whore. They branded me as their property.”

“By the time I was your age I thought I deserved all of it. That somehow there must be something I had done, some kind of damnation I had carried with me since birth. Do you understand what I mean?”

“Of course. I was raised Catholic,” he winced as he said it but was either too drunk or too stupid to stop himself.

“What happened to you isn’t your fault,” she stepped closer and hugged him.

Warren felt his pulse start to race; he debated hugging her back and decided to go for it but not to hug her back too much.

“Maybe… maybe if I was a little more badass I could have fought them. When it all happened I just kind of froze. Why didn’t I throw a chair at them or yell at them or something? They killed my friends and I all I could do was stare.”

“You know what they are. There was nothing you could do. You’re just man Warren.”

He couldn’t look at her any more, he stared at the larder wall, the candlelight made the patterns in the marble dance, “I’m not much of a man, that’s the problem. I never think to fight, just cower.”

“That doesn’t sound much better,” Warren felt himself starting to cry. “The gentle guy usually doesn’t slay the dragon and get the girl.”

“Why would you ever want to slay a dragon? The poor things.”

The hug broke and she reached around him, “Ah there we are.”

She pulled a rectangular box from the shelf to the side of him, it was labeled ‘Ice Cream’ but was otherwise generic looking. She handed it to Warren and retrieved the candleholder, “We better get back before they think we’re fooling around.”

“Come on,” she headed for the door, “We better get that pie before Sig summons the Metastasis on general principals.”

“You know, a lot of the time I have no idea what you’re talking about…” Warren followed her, “…but thank you.”

“My pleasure,” She gave him a smile, “Besides it’s nice to have someone around here I can beat at chess anytime I want.”

“Just a minute here! How do you know I wasn’t letting you win?”

Just as the larder door swung to a close, Warren heard a rustling sound. He looked back to see the shelf they had retrieved the ice cream from- it was an ordered row of boxes without a single gap in it.