In The Shadow Of His Nemesis chapter twenty four 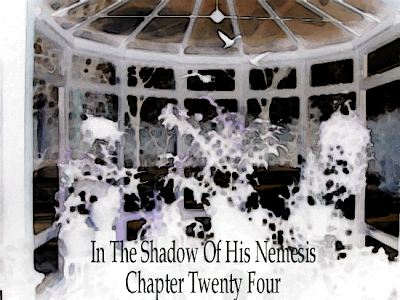 
After dinner Isobel had asked if there were any pencils or paper around, she felt crazy with the itch to draw. Hao had done more than find her pencils and papers; she had brought her a sketch pad and some charcoals.

Just what the doctor ordered.

Setting down in the empty solarium Isobel worked by the light of an oil lamp- there was no electricity at Laurel House. At first she just made little doodles here and there on the paper; a bird, a car, a tree, an imaginary face. Slowly reality began to intrude on her work- there was Cheryl’s face, the gentle landscape of Galen lying nude atop her bed, the grotesqueries that were Ms. Ginnmett and Mr. Sauno.

It hurt to make those drawings but it somehow reliving as well, as though she was somehow purging herself. Of course Isobel wasn’t so naïve to think this simple act would truly earn her a good night’s sleep but she let herself hope.

She heard a giggle and looked over to see Roxanne and Jack pass with platefuls of food. They were both in their bathrobes and grinning like children at mischief.

It amused her for a moment to imagine the two of them together, Jack with his long hair and male model build snuggled close to Roxanne with her boyish hairdo and oversized curves. It seemed like the rule of Laurel House was that opposites attracted.

Is it that? She wondered. Or is it that they have no one else?

Angie told her that some of the guests had been here for more than a decade and Isobel tried to imagine a lifetime of lamplight and water closets, of fireplaces and wood stoves. She couldn’t really, this whole thing felt like a camping trip sometimes; a bit of roughing it before returning to the real world.

Of course she knew better than to assume she could ever return to her old life now. For all she knew she might very well become one of Laurel House’s lifetime guests.

I’ve got a funny feeling Warren wouldn’t mind that one bit. Isobel thought, At least as long his new crush stays here too.

At the thought of them Isobel made a quick sketch of the pair of them, her brother and the regal, dark skinned woman staring moonily into each other’s eyes.

Galen was standing before her. Isobel felt goose bumps work their way up her arms and her mouth go dry. She had spent so long trying not to say more than two syllables to him but was that really how she wanted things to stay? Wasn’t he just as much a victim of any of them?

They kept looking at each other; the uncomfortable silence stretched on until finally Isobel said, “Sit down.”

He pulled a chair up close to her, “What are you drawing?”

“This and that” She said but he glimpsed the sketches before she could hide them.

“I guess we should talk.” She said.

Galen nodded, “Me either”

The night was cloudy and the dark seemed to press down on the glass ceiling of the solarium. It almost seemed like the rest of the world didn’t exist. Except that the way Jack had explained it to them was that the world was just fine, it was Laurel House that didn’t quite exist.

They heard the sound of a piano from further inside the house, Bodivar hard at work on Fur Elise again. He played other songs so beautifully but this one always seemed to daunt him.

“I don’t think what happened between us was a mistake…”

“I shouldn’t have.” Galen said, “You don’t know what this is about. You were innocent. If I had made you drop me off at a gas station none of this might have happened.”

“Yeah but it still might have. Everything that happened...” She said, “…it’s still all too much sometimes.”

“Where…” He ran a hand through his red hair, “…where does that leave us now?”

“I don’t know.” Isobel turned off the oil lamp and stood, leaving her art supplies on her chair, “Maybe we should sleep on it.”

Isobel retreated to her room, hoping that he hadn’t realized she was trembling.