In The Shadow Of His Nemesis chapter twenty three 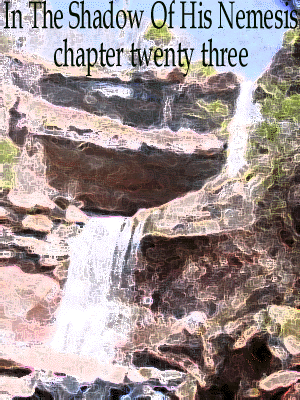 
Warren had worked up a good sweat in spite of the thin air and November chill. Was it the exercise? Or the pleasant company? Or was it the fur-lined nightmare of a coat he had been given to wear?

It was probably all of the above but Warren was enjoying himself too much to care.

The countryside was like something out of a postcard, the green of the pine trees, the white of the snow and blue of the sky. Hao had already pointed out a dozen interesting things- frozen streams, deer cautiously making their through the trees- even a cave he’d been dared to peer in. It made Warren think regretfully about how little time he spent in nature; his was a life lived indoors where the only landscapes to been seen were on the television or in his Dungeons and Dragons books. There had been no camping trips, no nature hikes, the untamed wilderness was just something to be glimpsed from a car window.

“You ok back there?” Hao called to him as she scrambled further uphill.

The going was a slippery and steep but Warren had a walking stick in his good hand to keep him from falling on his face, or worse. “I’m great …great. Hey how long have you lived at Laurel House?”

She said, “Come on, almost there.”

“We’ve only been at this an hour.” She laughed.

“Really? Feels like longer.” Warren momentarily imagined what it would have been like to have Tim and Colin along with him. Tim would probably be keeping up with Hao so he could try and put the moves on her and Colin would be unconscious at the base of the hill. Warren started to smile but suddenly their deaths were playing out in front of his eyes all over again. His pace slowed.

“Warren?” she called back to him, “Are you all right?”

“Yeah.” He made himself catch up top her; both of his pals would have wanted him to keep pace with the pretty girl.

Spruce Creek looked more like a river to Warren’s tenderfoot sensibilities. It reminded him of the kinds of places you would see fishermen wading into with high priced rods and ugly hook-laden hats. The sound of the water was peaceful. Of course he couldn’t appreciate it fully until he had caught his breath.

“This is where I come,” Hao said, “when the memories are too much.”

“You think you’re the only one that Monarchs have hurt? They’re like feuding giants, stomping around and not caring who they trample.” She moved closer to him, her face sympathetic and sad.

“I tell you Hao, I still don’t get what they’re about. Or what they want.”

“I know it sounds like a cliché but what they want is the world.” She found a handful of stones and gave half of them to Warren, “Then again I suppose we all do in a way but we learn to accept with less.”

“I never knew what I wanted, except maybe to get out of high school alive.” Warren watched her skim a few stones before trying himself. His stone landed in the water with a depressing Ker-splunk! “Now I think I’d just like to stay alive.”

“You could always stay here.” Her next throw skipped all the way to the other shore, “Unless of course the need for cable TV is worth the risk.”

“Well at least I could catch up with my reading.”

“See what I mean about learning to accept less?”

"I saw my two of my best friends murdered in front of my eyes for reasons I don’t think will never make sense to me.” He was surprised by the anger in his voice, “How can I accept that?”

“We have to if we want to survive and I think living happily ever after is the best revenge.”

“Some real revenge sounds nice but I wouldn’t even know where to start.” Two skips that time, he was getting better, and with his left hand no less, “I’d just like my old life back but that’s never going to happen is it?”

“Nope.” Hao threw her last rock and started walking again, “When you become aware of the...for lack of a better word, the 'preternatural' you can never divorce yourself from it."

"What do you mean?" Warren walked beside her and intended to keep doing so, so long as they didn’t go uphill any more.

"You can never regain your innocence, you can never go back. You've become aware of an aspect of the world that most human beings can't see and don't believe in."

"It's a two way street Warren, that aspect of the world has also become aware of you." She offered him a melancholy smile. "It's like that depressing little freak Nietzsche said, 'When you look long into an abyss, the abyss also looks into you.'"

“You mean the Monarchs are eventually going to get me? And the whole world to boot?” Warren started to feel that familiar claustrophobia, not the kind that was triggered by hemmed in physically but the kind that came from feeling trapped by his own life.

"It's not so bad. There are other places like this, although they are slowly dying out and being replaced by mini-malls and cheap housing. And there are other forces at work in the world, some worse than the likes of the Monarchs and Galen’s people, others better than angels.”

“Whoa. I guess I should have stayed in Sunday school.” They were starting to head slightly uphill again but the incline was gentle.

Hao laughed a little at his quip, “None of this is as simple as I'm making it sound, most of us just tread the gray borderline between the two polarities and try to keep alive."

They walked in silence for a time, the sound of rushing water was growing louder until is sounded like a roar of hoofbeats. Hao smiled and led him further along and suddenly they were at their goal.

The green forest gave way to cliff that sent the waters of Spruce Creek foaming down over a hundred feet to a second drop of nearly equal height to a basin where the water churned and sent up spumes of mist. “It is really beautiful.” Warren said again, “That you for this.”

She gave his arm a friendly squeeze, “Anytime you need to come out here you just say the word.”

A troubled look crossed Warren’s features, “Hao, what did you mean by Galen’s people? I have a funny feeling you didn’t mean the Irish.”

“Totally.” This was one of those moments where Warren didn’t know what news he was going to get, but he knew he wasn’t going to like it. The roar of the falls seemed to fade into the background in favor of her voice.

“Ok…” Now he was really worried.