In The Shadow Of His Nemesis chapter nineteen 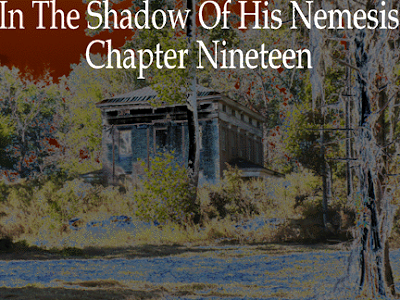 
The air was still crisp with the aftermath of the morning's frost. Galen had left the trail used by hikers an hour ago. He navigated his way down the slope of North Mountain, slipping like a shadow between the sycamores and pine trees. Dirty and grass gave way to jutting roots and exposed rock. He had taken his shoes off, tied the laces together and hung them around his neck. It felt good to feel the Earth under his bare feet, to breathe chilly air and feel the sun at his back.

And the silence! There were no growling engines, or chattering voices here; just the wind whispering through the trees and the calls of birds. To Galen it was like returning home after a long journey.

But he couldn't enjoy it, not when the home in question had been tainted by treachery, not when he felt more like an intruder with every footstep.

His route brought him to a break in the trees that gave him a view of the peak of Stoppel Point. This entire region of the Catskills had once been called the Great Wall of Mantiou and it had been teeming with mystery and wonder, now it was called an escarpment, an empty pointless name.

And ruins. Galen thought, So many ruins.

For a time this entire region of the Catskills had been home to dozens of resorts and campgrounds, whole economies built up around the ebb and flow of vacationers. Changing tastes and the affordability of travel to more exotic destinations brought an end to all that and by the 1980's the entire region became dotted with abandoned lodges and retreats that were slowly being consumed by the elements and decay.

Of course there were other remains as well, remains that hinted at a whole other world.

The sound of a patch of ice cracking cut the silence, Galen paused, listening. He told himself he was worrying over nothing. No one knew where they were and even if their pursuers suspected they could never find Laurel House, it was hidden and protected. Some said by love. He wasn’t so naive as too believe that of course, but it was a comforting sentiment.

Galen waited and listened for a minute more before he started moving again. His path took him further down slope, the trees closed back in over his view of the skyline.

Galen spotted the first marking that showed he was heading the right way. To the normal eye they seemed like nothing more than large stones scratched and worn away by the elements or wildlife. He veered left heading towards the place where the shadows of North Mountain and Stoppel Point met. The sloping, half frozen ground made his footing more and more precarious, he thought to himself that this would be a bad place for him to be cornered.

But cornered by whom?

The possibilities were endless. He’d been making enemies for as long as he'd been running.

Sometimes it left him so weary, the subterfuge, the never feeling safe and no matter where he ran, no matter what he did other lives were destroyed in the aftermath, conspirators and innocents alike. Isobel and her brother were just the latest victims.

Another marker, this one a trio of short blunt cuts across the top of an old boulder, he was getting closer now. Part of him wanted to give in to the callings of instinct and tradition but there was no point to it. Traditions didn't matter when your culture was in ashes and following your instincts, like following your heart, could only lead to disaster.

Galen didn't know what surprised him more, that he had become physical with Isobel so easily or that she had become so infatuated with him. In truth he hadn't come back to her apartment that night looking to play Romeo or rescuer but that was exactly what he had found himself doing. After she had fled he had felt obligated to search for her and protect her.

Then she had strong-armed him into that fool-headed rescue attempt. Galen had known that the Monarchs couldn't be bluffed or stared down. He had tried, and look what it had gotten them.

There was a darkening in the treeline up ahead, he could see the outlines of the Culann manse. It was made from wood the color of smoke, the gambrel roof was a shamble of scattered shingles. Dormer windows marked the first and second floor of the building, were all gaping and glassless. Galen stood there for a time, imagining with the last moments for the Culann family must have been like, wondering what face their doom had worn.

Galen drew closer, his hair standing on edge, his nerves jittery with anticipation. The door had been splintered long ago and dirt had slowly worked its way into the house, tiny pawprints made their way this way and that. They were cat-prints, Galen was sure of it.

The elegant furniture of the antechamber was rotted and stained; the walls were scarred and dented with bullet fire. He absentmindedly ran a hand along the dents and pits.

Down the hallway past the receiving room led to the great hall. The great hall was wide and windowless, taking up and entire wing of the house. The bare wood floor creaked with his passing, there was more furniture here but it had been reduced to scraps and kindling.

A mural stretched across the far wall of the chamber, that was what Galen had come to see. Neglect and time had done nothing to weaken the strange power the painting held. An ordinary man seeing the gruesome chaos of Bosch-like imagery would take it to be a work of surrealism or fantasy but Galen knew better. There was one of these in each of the Great Houses.

The leftmost side of the mural depicted shapes spilling out of the shadows, most bestial, some man-like and a small handful were spindly with flesh the color of moonlight. All these creatures that had been born from this primal darkness shared single trait- silver eyes.

The shapes moved together as one for a time but then began to split into packs. The pale pearlescent figures made their way to the upper regions of the mural, the man-like creatures headed down towards the floor but their numbers dwindled by the inch. The beast-like forms roared across the center of the landscape, their eyes soulless, their teeth flashing.

And such a landscape! From mud huts to cities, from standing stones to swamps, beneath the stars, beneath the sun, the creatures ran riot over whatever they found; the beasts devouring, the moon-skinned taking slaves and the man-like creatures assuming postures of capitulation and defeat.

There was a map hidden among the allegories and legends but the trick of finding it was not for mundane sensibilities. Hidden symbols and subtle shadings marked a trail no less obscured than the one that had brought Galen here.

And there it was, a Torweg and not too far away at all. Relatively speaking.

He wondered to himself how many more were left in the world now, how many had been corrupted.

It pained him even more to know he was responsible for it.