In The Shadow Of His Nemesis chapter twenty 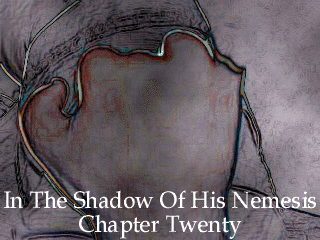 
Bad enough that he had to adjust to life with missing fingers.

Bad enough to find himself facing a short and unpleasant life on the run.

But to have to hide out in a place where there was no TV reception at all? No cable? No satellite? Not even a radio?

Laurel House had more than enough books, there were bookshelves of some kind in every room and books of every kind- fiction, non-fiction, even photo albums all arranged at in even rows and in random order. Warren didn’t feel much like reading, trying to hold a book just made him all the more conscious of his ruined hand.

He spent a lot of time alone in his room with nothing but his memories of lost friends and old cruelties to occupy his mind. If he got bored with that he would just remember that last day in his parents’ house, the day the future of the Talbot bloodline was almost wiped out in one fell swoop.

Galen had gotten them to Laurel House with a combination of high speed, low cunning and at least two cases of auto theft. There was no doubt in Warren’s mind that Galen had done this kind of thing before. But who is Galen? Warren thought again, What is he all about? Even after a week Warren still didn’t know, he didn’t really know what anyone here at Laurel House was all about.

There was a walk in closet, a big bed, a picture window, a balcony, a dresser, a roll top desk and a bathroom big enough to line dance in. The only thing that bothered Warren about it was the wallpaper, there was something very 1970’s about it. It looked one of the sets from one of those John Holmes movies that Colin had been so fond of.

A walk is what I need. Warren stepped out into the hallway where the lighting was soft and the carpet was not quite green. There were two doors on either side of his and a balcony directly ahead of him. If he wanted to end everything he could just pitch himself over the railing and hope he hit something hard or sharp enough on the floor below.

And if I don’t die Jack and Hao will kill me.

The thought of Hao made him smile a little bit; Warren wondered what she was doing now. He decided to find out.

The last door at the end of the hall opened and a grinning stoop-shouldered man stepped out. He greeted Warren with a voice that was thick with a Brazilian accent. "Hello pal."

"Hey Bodivar," Warren said. This was the man that had given his hand a proper bandaging within minutes of their arrival. Of course that arrival had involved them leaving their stolen car by the roadside and trudging through the Catskills for hours. By the time they had gotten there Warren had felt faint enough not to be surprised that there was a vacation lodge sitting out in the middle of the forest with no roads or power lines to mark its presence.

There had been a welcoming committee waiting for them however- Jack, Zeth, Sig and Bodivar.

"How are you feeling today Warren?" Bodivar asked as they walked slowly down the stairs.

“Better. Feeling better.” Warren said, and he supposed it was true.

Bodivar clapped him on the shoulder, “Good. Good. I was going to have some wine. Care to join me?”

“Isn’t it kind of early for that?”

“It might be later than you think.” Bodivar said, then exploded with laughter.

That man loves his own jokes…

“I was going to talk to Hao.” Warren said.

“Ahhhh.” Bodivar’s look became sly, “I imagine you might find her in the solarium.”

“Yeah I kind of figured.” Warren said, “But back on Earth we call them terraces.”

Bodivar laughed again, “What is a solarium but a terrace with a great glass canopy over it?”

“If you say so.” Warren said, “And I think I better check in on my sister too.”

“Galen is away so I think you might find her with Angie.” Bodivar said, “From One redhead or another eh?”

When they parted company at the landing, Bodivar was still chuckling to himself.

Warren headed for the solarium. He spied his sister and Angie sitting by the fireplace and talking quietly. Angie was a frail looking red haired woman. She was sweet and quiet and there was something about her that Isobel found very soothing. Warren decided to let them be.

There was very little light in the solarium at this part of the day but Warren knew that by sunset it would be blindingly bright and toasty warm. There were tables and lounge chairs arranged seemingly at random but Hao was sitting in the middle of the hardwood floor with her Barbie dolls and their accessories. Hao was a very pretty ebony skinned girl with an incongruous Chinese name; she was dressed in jeans, a sweater and a baseball cap. Humiliating experience had taught Warren never to ask a woman her age but he guessed she was older than him, a very beautiful kind of older.

She was humming under her breath as she held a Ken doll in one hand and a Malibu Barbie in the other; she moved them in a rough approximation of dancing. When she saw him she set her toys aside. “Hi Warren."

“Almost is the...” He started to wag his finger at her, and then realized it wasn't there anymore.

She gave him a sympathetic frown. “Why don't you sit down? Grab a doll make yourself at home.”

“I'll sit down but I'm not really into dolls.”

Warren picked up one of the Kens and twirled it idly with his good hand. “Nope. My parents were all about giving me sporting equipment and bikes. Thankfully my grandparents were good for the occasional computer or videogame.”

“Any reason?” Hao asked, “Or were they just jerks?”

She gave him a playful once over with her eyes. “Well it worked.”

“Not exactly. I was huge until last year or so.”

“Accent on the bored,” he said, “I would love a newspaper or a some HBO.”

“No gots. Sorry,” she said, “what's the point of being hidden if you have mail service and a cable bill?”

“I got it,” she stood and then pulled him to his feet, “Let's go for a walk. I bet you haven't been outside once.”

Warren felt his heart to a little flip at the feel of her touch, “I though we were supposed to be lying low.”

“I don't even have a coat!” Warren felt himself getting more flustered.