In The Shadow Of His Nemesis chapter eleven 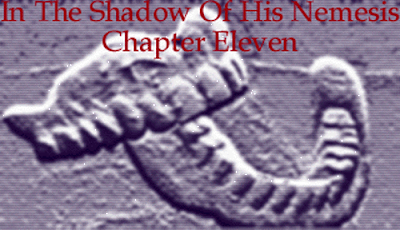 Sunlight glistened through the streaked windshield of the Honda Civic; somewhere a car horn bleated a long ugly note. Isobel stirred groggily, peeling her face from the drool-sticky passenger seat. The cuts on her arm had dried and scabbed, her blouse had become stuck to it. The wound in her side was still sore and weeping blood but at least it was less than before. She had fallen asleep worrying about stitches and blood loss but afraid to go to a hospital.

"Run if you want. We'll catch up to you later."

"Oh my God." she whispered. Her car was a park that only really got used by high school kids and that was just for partying and making out. "Oh God." Isobel cupped a hand across her mouth. She could still smell the odor of gunpowder on her fingers. Her gag reflex twitched and her mind rebelled.

Isobel put a hand on the cold steering wheel, pumped the gas pedal twice and turned the key. The engine coughed miserably.

What am I going to do? She wondered

"Run if you want. We'll catch up to you later."

Isobel put her car into drive. Why hadn’t she waited for Galen? Or tried to rescue him? Was she that much of a coward? Was it because she had glimpsed his world and wanted no part of it? She drove slowly towards the exit of the park and when she got to the main street, she merged with traffic. She asked herself what the intruders in her apartment had been.

And what, she wondered darkly, do they want with Galen?

The Honda Civic sped up but Isobel still didn’t know where she was going. Then she made a decision and headed for the Thruway. A few well timed U-turns later and she found herself where it all began. She pulled off to the side of the road near where Galen had emerged from and got out of her car. The night had made every landmark seem vast and threatening, but by the light of day Isobel saw its true face. The blacktop itself was not really black but a weather-beaten gray; the woods of roadside might have seemed deep and primeval but were really nothing more than a cluster of sad-looking trees. Somewhere high tension wires throbbed, setting Isobel's teeth on edge.

Occasionally a car whooshed by, the sound of its passing somehow sounding vaguely mournful to her. She started walking leaving the side of the road behind.

What am I expecting to find here?

A gust of wind blew her hair into her face, temporarily blinding her. As her fingers pulled it clear Isobel felt a moment of dreadful certainty that when she cleared her vision Helen Ginnmett and Piers Sauno would be there.

She bit her lip and parted her lids. She was alone.

Deeper into the woods her foot brushed against something, it was a shoe, a brown shoe. Although it wasn’t much of a shoe anymore, it looked as though if had been gnawed to pieces. Curiosity had hold of her and she made her way further in. Just beyond the trees she found a small clearing, a stunted meadow. Ankle length grass shifted in the wind. The bright cloud-free sun made her squint as she scanned her surroundings. She saw a figure crouching against a tree.

Isobel stopped breathing, she backed up getting ready to run. She was too far from her Civic now, too far from witnesses. Anything could happen to her out here and no one would ever know.

But the figure didn’t acknowledge her and Isobel risked a few steps closer.

It was a man, and she saw that he wasn’t crouching; he was slumping against the tree. His posture was too relaxed for him to me anything but –

Seeing a second dead body in so short a time was bad enough but when she realized how quickly she calmed down a heartbeat or three later she almost felt guilty. Drawing nearer she saw the coin sized hole in the side of his temple and the spray of blood that had run down and dried on the bark of the tree.

The dead man had a sharp suit and ragged features. And an earring? There was a gun in the dead man’s hand, it was the very opposite of Cheryl’s slender automatic weapon - this was a bulky, grimy looking revolver. Isobel pulled the gun free of his stiffened fingers. A sour taste started to build up in her mouth but she held it at bay.

How many bullets left? How do you pop open the cylinder thing and check? Can I do it without shooting myself?

Isobel cast a furtive glance this way and that, and then started going through the dead man’s pockets.

She found a book of matches from someplace called Club Bes, a handful of mints and a velvet drawstring bag. Isobel jostled the bag in her hand hearing the contents clink together like a fistful of marbles. She pocketed her findings, gun and all, and then tried to find the dead man’s wallet.

If he falls on me I’ll go crazy. I know I will.

Three stifled breaths later and she had it, a leather billfold thick with cash. Isobel thumbed through it; it was all fifties and hundreds, more cash than she ever saw in a month of paychecks.

Mobsters or monsters? Or both? And what do they want with Galen?

A pair of dentures fell from the dead man’s mouth with a dry plop!

Isobel screamed and ran back to her car.

Email ThisBlogThis!Share to TwitterShare to FacebookShare to Pinterest
Labels: In The Shadow Of His Nemesis, Mythology In Progress