In The Shadow Of His Nemesis chapter eight 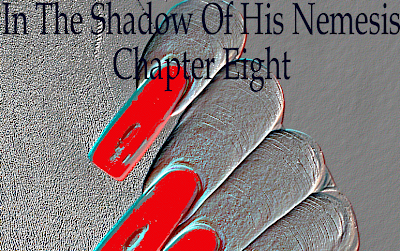 At seven minutes of five, Nick Schlegel turned off of Sand Creek Road into the Colonie Towers parking lot. He parked his black Camero and walked towards building A; his hair was hastily wet down and combed back, he was wearing a white shirt and tie with his leather jacket. He had come straight over from work without stopping for flowers or candy; he knew he wouldn't need either. For all she might insist otherwise, Nick knew that after just a few minutes of his puppy-dog eyes and expert charm that sweet, ever-forgiving Isobel would be cooing on her back. The thought of her legs wrapped around him made him start to grow pleasantly hard, Isobel might not be much to look at but like most plain girls she was a tiger in the sack. Nick always assumed it was because they never knew when they were going to get lucky again. He pushed the button for Isobel's apartment and waited.

Finally the door buzzed, he pushed it open and walked through the lobby. Nick hummed to himself as he pressed the button for the elevator. Isobel hadn't returned his calls today but he wasn't worried. Where else would she be? Her parents were off on some kind of world cruise and he knew for a fact that her bitch friend Cheryl worked late on Thursday nights.

There was no doubt about it- she was in her apartment, waiting for him. Even if she didn't want to admit it to herself, even if she was doing housework or watching television, that's what she was really doing- waiting for him. It never failed, Nick thought, the worse you treated a woman, the crazier she was about you.

A soft bell sounded to announce the elevator's arrival, the doors opened and a trio of women with baby carriages trundled out. Nick watched them pass, a look of discomfort crossing his features. The air of the elevator reeked of baby powder and department store perfume. Nick pressed the 4th floor button and felt his stomach lurch as the car began its ascent.

When the doors re-opened, his view of the lobby was replaced with the main hallway of the fourth floor. Nick got out and walked quickly down the quiet, gently lit corridor to apartment 430. He paused, Isobel's door was open a crack. Had someone broken in? Nick didn't think so, the Colonie Towers was pretty safety conscious, any visitors would have to be buzzed in.

Maybe, he mused, she was in there waiting for him. Grinning Nick pushed the door open; it creaked slightly, underscoring his voice as he called her name.

Walking into the parlor, he felt a cold slap of surprise as he saw the slender too-handsome man sitting on the couch. Right off the bat Nick knew he was a cop, his suit and posture made it so damn obvious.

What the Hell is that little bitch up to? Nick wondered as he readied an all-purpose excuse.

"Then again…" A woman stepped out of the kitchen, her hair was an elegant tangle of loose curls, her suit was finely tailored. The sight of her made Nick's palms sweat. "We didn't expect not to see you here. I mean the girl’s got pictures of you all over the place."

"But those pictures were face down." The man chuckled, "My partner is such a romantic."

Nick shook his head, "Uh, what is this? Who are you people?"

The woman with the killer bod slipped behind him, for a brief moment Nick felt her press against him. As she closed the door she said, "But those messages on the answering machine, so pleading."

"But not too pleading." The man stood, "And look he's here empty handed. I think romance is the furthest thing from his mind. Am I right Mr.…?"

"Mr. Nick?" Her laugh was like his, just softer.

"You to have five seconds to stop dicking me around and tell me what the frig is going on here before I leave."

"See?" The too handsome man said, "He didn’t even ask about Miss Talbot once."

"Which means our Good Samaritan soiled her bedsheets last night with Galen." The woman shook her head with bemusement, "Trampy."

"Fuck this." Nick turned to leave, "And fuck you."

The too-handsome man lunged at Nick. His grip as like iron, with one hand he pulled Nick's arms behind his back and forced him to his knees. Nick started to cry out.

"Hush." the woman silenced him by pinching his lips together. The force of her grip drove the ends of her long red-painted fingernails through his flesh.