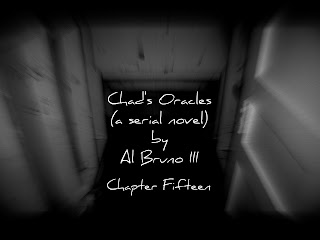 The lanterns were running low, and the boarded windows of the house made the hallways and rooms even darker. One Squonk held her arms down, the other her legs and the third held her head steady with hands on either side of her skull. Her skin crawled at their touch. Which one was it? She wondered morbidly, Who was my first?

Chad had a fresh notebook on his lap, “Just tell me what you see. We’re so close now.”

She tried to turn to look at him but the hands holding her head would not let her, “What if I lie?”

“Why haven’t the police come searching for me? They must know about this place.”

“How? How would they know?” He scribbled down a few more notes at the bottom of the notebook and turned to a fresh page. Then he placed the book and the pen beside him on the floor, “The only ones that knew were you, Samantha and …What was his name again?”

Chad reached into his pocket and drew out a wad of tin foil, “He was out bright and early delivering his papers.”

“Oh God… Oh my God…” Thelma had thought she had no tears left.

“His neck was broken it was quick.” He unwrapped the foil, the shape inside only tangentially resembled the Eagoryl she had seen before. That sad scrap of flesh had been shriveled and greasy with decay but this was gleaming and pink. It reminded her of a piece of meat that had been freshly filleted.

“You shit. You cocksucker!” She would have cursed more but the Squonk holding her head gave her jawbone a squeeze forcing her mouth open.

“Hush now. It doesn’t matter, he never mattered,” Chad gave the Eagoryl a twist, the veins that threaded through it popped and bled. It was even worse when it was fresh. It tasted like teardrops, blood and death. Waves of revulsion washed over her like a fever, she thought of Laurie, and Samantha and Peanut. She wondered how many souls had been destroyed simply because a monster had passed in their wake.

The room twisted around her, transforming itself into a jumble of sharp angles and clean arcs. When she stared up at Chad she found she could see every pore of his skin, every blemish and wrinkle. A heartbeat later and she could see past the solidity of him to the swirling confusion of matter that made up his physical being.

“You don’t understand.” Thelma said blearily, “You can’t even guess.”

“Jungle and dust…” She tried to bite her lip and keep from talking but she had to, she was sure if she didn’t her head would burst, “I think it’s Africa.”

Chad was scribbling again, pausing only to ask, “When is it? Who do you see?”

“Empty classrooms and mass graves… The Hierophant walks… Searching…” Thelma nodded at the familiarity of that yellow cloaked shape, “The sigil is everywhere… You can hear the whispers…”

Chad voice sent the vision scattering like a school of fish, “I can’t make out what you’re saying. I need facts.”

Hands seized her by the shoulders, drawing her up, setting her head lolling on her shoulders. A few weeks ago Thelma would have been certain that the only expression Chad was capable of was an easygoing smile. To see such desperate rage twisting that grin out of shape and bringing tears to his eyes was a wonder to behold. In the moment before he started violently shaking her she realized she could see a resemblance to the Squonks now, an almost familial resemblance.

“Not again! Not this again!” He screeched, “You’re lying! Why won’t you tell me what you see?”

But Thelma was beyond seeing him, beyond feeling the fury of him thrashing her back and forth until her head was battering the wall with plaster-cracking force. The ringing in her head became a roomful of voices all talking at once. Only two of the voices were familiar yet she knew them all- her sister Oracles; Laurie, Samantha, Adrienne, Nikki, Jeannie and so many others. Each one was so different from the last but they all shared a single final vision.

“My Principals find you wanting and of limited use because you believe that destiny is a river whose course can be changed. Your desires mean nothing to the future.” She shouted through rattling teeth, “You talk of oblivion but only in the future tense. You have glimpsed the Ruins of Creation but refuse to understand.”

Chad threw Thelma to the floor and sent the Squonks scurrying to the other side of the room. He grabbed her by the throat, watching her gasp and choke as he rained curses down on her.

…flesh and matter lose all meaning; reality peels away and becomes translucent. The Spaces Between loom, they are the eternities that span the silence between each tick of the clock and the yawning void that sprawls in the distance between one molecule and the next.

It is here that the very Ruins of Creation become visible, those impossible engines choked into stillness by the weight of eternity. Their once gleaming surfaces are now pitted and stained with time; the swollen hydrozoa-like shapes of the dead drift across their worn surfaces.

Little more than mindless husks, these soul-remnants grasp at each other and nothing. A current of unfamiliar longings and impossible memories carries them through realms of mystery, nightmare and entropy…

The tin foil fell to the floor. Chad held the Eagoryl in his free hand. Thelma’s breaths had become gurgling gasps, her tongue lolled out of her mouth. “You’ll tell me damn you!” He squeezed the scrap of flesh with such force that it tore open in a dozen places and quivered like a living thing. The foul tasting fluid spilled into Thelma’s mouth and up her nose but she was beyond noticing.

…the realms brim with possibilities and secrets, with fractured landscapes and four dimensional vistas. Each waits patiently for the right words to be spoken or the right pattern to be walked so they might be unlocked…