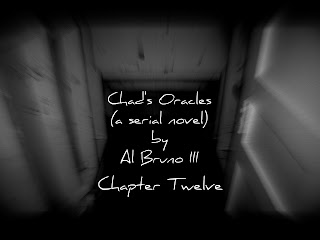 Thelma French spent the rest of the night and part of the next day gagged and trussed up. None of the girls had been particularly happy at her screaming and kicking in the middle of the night. In the morning they moved her to one of the other rooms, one that had a lockable door and a window that had been painted shut. Thelma fought like crazy but by force of numbers they managed to handcuff her to this room’s radiator. When they took the gag out of her mouth to offer her some water and a Pop Tart she just started screaming.

So the Oracles gagged her again but not before she’d managed to give Laurie a good hard bite on the finger.

By the time the sun was high in the sky Thelma’s stomach was growling and her bowels were groaning but as far as she was concerned if they were content to let her go hungry and wet herself then she was more than willing to do so. Not like this. She ran the thought through her head again and again, Not here and not like this.

Finally Chad had come to see her. He had sat down beside her like a parent about to chide an unruly child. “What…” he asked, “...are you trying to accomplish here?”

Thelma couldn’t speak but she was sure her glare was enough to make her feelings known.

“You can’t tell me you didn’t know what you were getting into here. You talked to the Oracles. You saw the Squonks. You know what happened to your friend Samantha. There were no surprises here,” he leaned down until they were eye to eye, “you know you’re father’s going to be all right. He’s going to live for years. Now we have to discover what else you can see.”

His proximity reminded her of their kiss and that set her trembling. She tried to roll away, cursing through the gag.

Grateful? Thelma could have wept.

“The girls and I have some errands to run,” he said, “we have to stock up on groceries and stop by the hardware store. Don’t worry though, the Squonks will be here to make sure nothing bad happens to you. Since we can’t trust you, you’re going to have to go hungry but that’s OK, the Eagoryl works faster on an empty stomach.”

No! She tried to shout through the gag, No!

Chad watched her for a moment, his expression souring; he opened his mouth to speak but then turned to go locking the door on the way out.

The hours crept by. Every once in a while she would hear the plodding footsteps of one of the Squonks but she never glimpsed them. She thought to herself that Chad certainly kept his monsters well trained. Every once in a while she tested her bonds but her panic was no match for metal. Thelma considered that she couldn’t have been the first unwilling member of their little tribe. She wondered what became of those other ersatz Oracles. Had they eventually succumbed or were their bodies buried in some watery corner of the basement?

Hunger and thirst made a misery of her, robbing her of her earlier defiance. There was something else prickling at her as well, a tingling ache that seemed to radiate from the center of her forehead. A headache or a migraine? She supposed that considering her situation it was to be expected.

He’s doing this to control me. She told herself, To break my spirit.

When she finally lost control of her bowels she felt tears well up but she refused to give in and cry. Instead she thought and planned for tonight. Chad thought he was going to dope her up again but she wouldn’t let him. Anyone that tried to fill her mouth with crap again was going to get more than a nip on the finger

She spent her second day in the locked room passing in and out of consciousness. Her waking hours she spent making noise and trying to get her captors attention. She still heard the Squonks muttering and clomping around, she was sure that one of the big goons had paused outside the door for a time. Had he peeked through the keyhole? Why didn’t they do something?

Wasn’t this bad enough? If it wasn’t, then how prepared were they willing to let it get?

The migraine had settled in for the long haul, it seemed to draw strength from the aching hunger, the burning thirst and the sickly feel of her own filth against her skin. Some part of her longed for the Eagoryl, for the chance to shrug off her sullied flesh and float free, to see prophesies and mysteries splayed out before her.

Of course she knew better. To give in would be to submit and to submit would mean to allow herself to be defined by someone else. Oracle or whore? She’d didn’t want to be either.

But she was so thirsty. After the sun set she tried to occupy her mind with the stars. The tiny pinpricks of light taunted her, their brightness at once dazzlingly close and yet drawing away. There was no way in her present state that she could keep a proper count of them so she just let her gaze flit back and forth from star to star as though she were trying to forge constellations from the aching nonsense her thoughts had been reduced to.

Finally in the dead of night the door clicked open and she saw Chad standing there wreathed in the light from the hallway. She sobbed with relief at the sight of him. She tried to beg him for a drink or a scrap of food or just a moment with her hands free so she could feel sensation return to them. The words were guttural and choking, the rag that had been stuffed into her mouth left her on the verge of gagging. He stared at her for a few moments and then closed the door again.