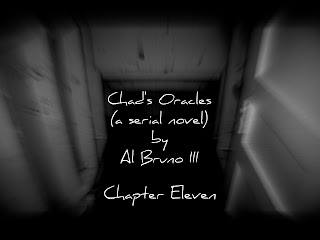 They carried her back to the Oracles’ room and handcuffed her to the radiator. They let her scream and pull at her restraints. When Sara brought her a sleeping bag and an extra pillow there was an apologetic look in her eyes. Then Annie called her back to their card game and they seemed to almost forget their prisoner was there.

Whenever Thelma shouted at them they ignored her, when she asked a question in a calm voice Bonita gave her a matter of fact answer.

And no matter how many ways Thelma asked the question the answer was always the same, “You’re not going anywhere.”

The sun descended in a slow arc, its light passing through, then past the window. Thelma watched its progress with a kind of morbid fascination. Wasn’t it after sunset when dreadful things were done and bodies were disposed of? She shivered at the thought. The radio stayed on the entire afternoon, always tuned to the top forty station, when the news came on they all paused to hear the details about the ongoing police search for Thelma French.

When the music started again they went back to their games. With nothing better to do then watch them, Thelma observed the strange symbols that covered their homemade playing cards. They looked like the symbols Thelma had seen on the basement walls.

But come here she had, seduced by Chad’s promise of knowing. And she had glimpsed something hadn’t she? Her father passing envelopes and cash to a stranger in a half-empty restaurant in the middle of nowhere like he was some kind of a spy.

What the Hell was that about?

She could believe world wars, dark gods and masked Hierophants but her Dad doing anything surreptitious? He couldn’t even keep her Christmas presents a secret.

When the sun had fully set the girls fired up the lanterns, an hour or so later Chad came in with several boxes of pizza and cans of soda. At first Thelma had thought to refuse to eat but she wasn’t sure what good a hunger strike would do in a situation like this.

So she resigned herself to having a can of Pepsi and a little food; there were three types of pizza to choose from but each choice had anchovies. She picked them off thinking to throw them away but Chad ate all her leavings, joking that she didn’t know what she was missing.

When everyone had eaten Chad chose one of his Oracles, it was Bonita, and lead her from the room. A short while later Thelma started to hear the other girl mumbling nonsense while Chad spoke soothingly and the Squonks burbled their nonsense. She tried to hear what exactly was being said but Annie turned up the radio and drowned them out.

Thelma asked, “What did you do that for?”

“You knew what you were getting in to.”

The other Oracles left her alone after that, an hour Bonita’s voice became a caterwauling and the Squonks carried her in to the room. Sweat had plastered her hair to her head; she had soiled herself and bitten her tongue. The Squonks gently set her down and the other Oracles saw to cleaning her from head to toe. All the while Bonita’s mouth was moving but no words came out, only blood.

Thelma asked, “Is that what you did for me?”

“Sure,” Sara said, “we couldn’t leave you all messy and everything.”

Once Bonita had been tidied up, they dressed her and bundled her into a sleeping bag. Jackie turned her onto her stomach and rubbed her back, trying to relax her. All the while Chad watched from the doorway. The Squonks were nowhere to be seen.

When Chad excused himself Thelma decided it was time to act. “I need…” her voice was a whisper, “…I need to go to the bathroom.” She rattled the handcuffs for emphasis.

Annie shrugged and brought a deep ceramic bowl to her.

Thelma shook her head with disbelief, “Oh come on!”

Even after the lanterns had been extinguished Thelma had been certain she wouldn’t be able to fall asleep; then again she had been certain she would never in her life have to piss in a bowl while handcuffed to a radiator either. She had laid there an hour, listening to Chad’s Oracles drop off to sleep. Alone with her thoughts she had come up with one unworkable or improbable escape plan after another and in the end that had been as good as counting sheep. She drifted off a short while later and slept.

…Flesh and matter lose all meaning; reality peels away and becomes translucent. The Spaces Between loom, they are the eternities that span the silence between each tick of the clock and the yawning void that sprawls in the distance between one molecule and the next…

Thelma sat up suddenly, nearly smacking her head into the radiator, the metal of the handcuff bit into the flesh of her wrist. Shuddering she drew the sleeping bag in tight around herself. The glimmer from a handful of stars sparkled in through the window, leaving her eyes light-starved and confused.

There were sounds nearby, furtive and soft; two shapes tangled together in rhythmic motion.

“Shhhh.” One of the Oracles had made her way over to Thelma, “Want some gum? The chewing sound covers up the noises, if they bother you.”

It was Maureen, the darkness had made her expression impossible to read. Thelma took the stick of gum being offered and slowly chewed it. The cinnamon flavor was strong but she could still taste the carrion sweetness of the Eagoryl. When she spoke again it was in a hushed tone, “Is that one of the Squonks?”

“Peter?” Thelma raised her voice, the grunting and movements paused long enough for someone to shush them. Thelma whispered again, “They have names?”

“Even dogs have names and we have to call them something. They’re Greg, Peter and Bobby.”

“Oh my God that’s sick... and how can you sleep through this?”

“We don’t sleep, we just don’t pay attention. There’s other things to think about.”

Maureen patted her shoulder, “It’s nothing to be afraid of. I’s barely anything at all really but it means so much to them.”

“Listen to me I don’t want any part of this.”

“You wouldn’t be here if you didn’t.”

Thelma whispered, “I’m here because I’m handcuffed to a radiator.”

Maureen shook her head and chuckled, “Those two go at it every Wednesday night. It’s like they’re married or something.”

“Just let me go. I only wanted to know about my Dad.”

“I mean we all have to do it, it’s part of the deal but Annie seems to do it because she feels sorry for Peter. It’s kinda sweet.”

Thelma stared at her in disbelief, “What do you mean we all have to do it?”

“When the time is right. They’re very gentle and you know that afterwards they’re not going to call you a whore behind your back.”

The room seemed to close in around Thelma, cocooning her in pulsing gloom and the heat of too many bodies in an enclosed space. She pulled at the handcuff, at the radiator. Not like this. She told herself, Not here and not like this.

She started screaming, praying that someone would hear her cries.