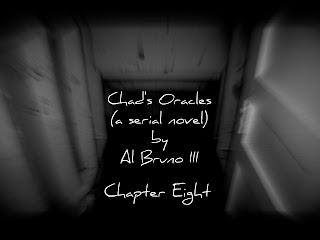 Chad was sitting on the front steps of the house on Kissimmee Avenue, waiting for her. It was almost midnight and he was dappled with shadows and starlight. “How did you know?” Thelma got off her bicycle and let it fall in the driveway, “How did you know I wouldn’t say anything?”

He looked up from his whittling; the shape in the wood was fluid, formless and weirdly beautiful. He pointed to the upper floor of the house, where light and music blared from open windows, “They knew.”

He grinned, “They don’t belong to me. Maybe I belong to them.”

“Oh really?” She had to fight not to return that smile.

“You’re like us, disconnected from the mundane world. You don’t fit in.”

He shrugged and turned his attention back to his whittling.

Thelma said, “I have a family. I have friends.”

“Like Samantha?” There was a curl of wood at the edge of the knife; he stared at it contemplatively before letting it fall between his feet.

“She was never sure of you. You never saw her socially outside of school. Were you ashamed to be seen with her in public? Did having a fat friend embarrass you? Or was it her reputation?”

“No! I just didn’t feel like doing the stuff she wanted to do.”

“When someone is your friend, sometimes you go anyway.”

“Who the fuck are you to judge me?” Thelma said, suddenly defensive. It was bad enough she had snuck out of the house at midnight leaving her mother alone in a valium-induced stupor, bad enough her father was on life support- now she had to deal with this? “I’m not a bad person. Not like you!”

Chad asked, “The only thing I’m guilty of is being too anxious. I couldn’t wait for you to join us. I shouldn’t have brought you here so soon.”

“You want me to be one of your Oracles?”

“Where else do you have to go?”

“What does that mean?”

He kept his eyes focused on his work, “You know. You know a lot more than you admit to anyone, even yourself. You might not be able to see the future but you understand it.”

“I barely understand you.”

“You know nothing matters. You told Samantha that you weren’t afraid of nuclear war.”

“You understand it doesn’t matter how rich or poor you are, if you die in a firestorm or a deathbed, if you have a dozen children and a thousand lovers. You can see how little it means because no one gets a happy ending. We all finish up afraid and alone.”

Chad paused before digging in with the knife, etching a wild curve into the wood. That done he paused and waited for her to look back at him, “That’s why you’re here isn’t? You want to ask them if your father is going to get better. Am I right?”

“But you don’t want to know that because you love him.”

“I do love him.” Thelma’s hands were fists now.

He slipped the knife into his boot and then began running his fingers over the edges of the wood, “Then why aren’t you back at the hospital, waiting at his bedside? Knowing what’s going to happen won’t change anything.”

“You’re afraid of the ‘if’. It’s the uncertainty, the not knowing. It’s scarier than death, scarier then Hell. Don’t be ashamed it’s a perfectly human feeling. You know that someday you’re going to be standing over your father’s grave, the when of it haunts you.”

“You think you know so damn much,” Thelma said, “then tell me if he’s going to be all right.”

He tossed the carving her way, she caught it easily, “You can see for yourself. All you have to do is come inside and promise to share with me what you find out.”

The figurine was of a woman, her arms akimbo and her head thrown back. Shapes slithered over her flesh, tastefully obscuring her near nudity. At first Thelma thought it was robes that swathed her, then she thought it might be water. Venus de Milo doing the backstroke? But no, that wasn’t right ether; there was something unpleasantly organic about the shapes that enveloped her.

Thelma handed the carving back to him, he took it and then offered her is other hand. Sighing with resignation she gave it to him and allowed herself to be lead inside. The lower level of the house was as empty and dark as she remembered it, “Where do I start? I think you call it Eagoryl?”

“Let me show you something first.” He led her to the basement door and pushed it open. There was a light switch right outside the door, he flicked it on. When she hesitated he tugged her hand a little harder, “This is important.”

Once they were on the basement steps he somehow ended up behind her, nudging her forward. The first thing Thelma noticed was the stench, it brought to her mind images of swamplands and swollen garbage bags festering in the summer heat. The basement was flooded all the way up to the fifth step of the stairs; a single bare bulb suspended from the ceiling was the only light source. Thelma thought to herself that Delores Cotton would have been proud. Ripples had been stirred up by their footfalls, they chased each other across the dark, oily surface of the water.

A snout-like, pale mask had been hung from a nail set high up on the furthest wall.

“Do you like the vizard?” Chad asked, “I made it myself. I think I got pretty close to the real thing but we won’t know for years yet.”

“Kind of like how it is with Santa Claus.” Bonita walked down the basement steps until she could rest her cheek against Chad’s shoulder

“Santa’s helpers.” Chad laughed a little, “I like that.”

Thelma said, “You should have someone pump this out.”

Chad tossed the carving into the water, “They like it this way.”

“Maybe we should go back upstairs?” Thelma had expected the wood carving to float but it sank without a trace, “So I can get to know the rest of the girls?”

Another voice called out from behind them, “Chad? Is that you?”

He called back, “Yes Annie.”

“Do you need any help?” She drew closer, her bare feet patted across the bare wood floor of the lower level, “I can get the net.”

“Who’s there?” Annie, her frizzy blonde hair pulled back, came down the cellar steps. She rested her head against Chad’s other shoulder, “Oh it’s you.”

“Yeah it’s me,” Thelma tried to sound calm but she was starting to feel surrounded

Stupid! Thelma thought. How could I be so stupid?

The rest of the girls piled on to the stairs behind Annie, all grinning like they were in on some private joke. The wooden stairway was already creaking and groaning in protest when three hulking figures moved into place behind the Oracles. Seen now, Thelma realized the faces of these so-called ‘Squonks’ could never be masks or a trick of the light. Their heads were misshapen and hairless, with rheumy eyes and protuberant mouths. Their breathing was irregular and explosive, full of licked lips and spittle.

Chad asked her, “Are you afraid?”

“I’m not exactly comfortable right now.” Thelma tried to move up onto the same step as Chad but he blocked her, “What are you going to do?”

“Baptism,” he said, “the first step to any true rebirth. Get the lights someone”

Everything went black and as her eyes struggled to adjust she was shoved hard. Thelma grasped at the emptiness. Her fingers scrabbled at a sleeve, caught and then slipped away.